'NEXT STAGE IN A WEEK'

• Last year, only two–bothe female- were confirmed left in the world.

• Scientists harvested 10 eggs from them, seven have been inseminated. 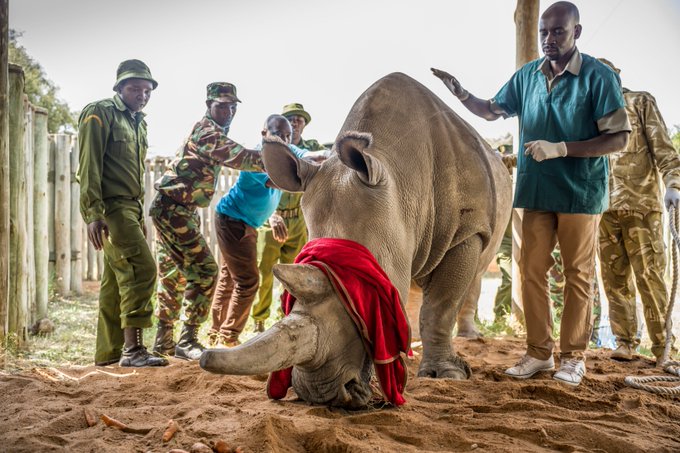 WORLDWIDE HOPE: A group of scientists and conservationists when they successfully harvested eggs from the two female rhinos
Image: OL PEJETA CONSERVANCY

Only two Northern subspecies rhinos were in existence last year. Both (Fatu, 18 and Najin, 29) are females and in captivity.

Scientists successfully harvested 10 eggs from Najin and Fatu on August 22 in Kenya.

On Monday, the International Consortium of Scientists and Conservationists announced that seven out of the 10 eggs (four from Fatu and three from Najin) have successfully matured and are artificially inseminated.

"This is the next critical step in hopefully creating viable embryos that can be frozen and then later on transferred to Southern white rhino surrogate mothers," the scientists said in a statement.

The high rate of the maturation recorded was miraculous, they said, "as we do not get such levels (comparable to what we get with horse oocytes) with Southern white rhino females in European zoos".

They reported that  Saut's semen was difficult to work with, hence they had to thaw two batches of semen to find three live sperm needed for the eggs of Najin.

"We need to wait to see if any viable embryo develops to the stage where it can be cryopreserved for later transfer," Cesare Galli said.

The results of possible embryo development are set to be known on September 10.

The research programme known as BioRescue is funded by the German Federal Ministry of Education and Research.

Post a comment
WATCH: The latest videos from the Star
by GORDON OSEN News Journalist
News
03 September 2019 - 05:00
Read The E-Paper