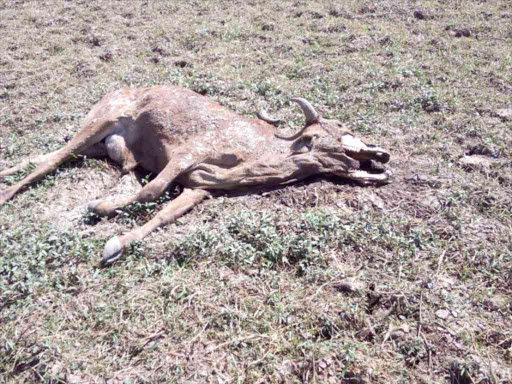 An animal that died in Baringo county as a result of the drought. /JOSEPH KANGOGO

Drought is worsening across 13 counties owing to the prevailing hot weather conditions across the country.

A drought status and response report by the National Drought Management Authority indicates that the worst hit regions include the North Eastern counties of Garissa, Marsabit, Wajir and Mandera.

The Interior ministry said in a statement on Wednesday that nine other counties are in the alert level while 14 are in the normal drought phase.

The ministry did not, however, name the counties.

It said adequate drought mitigation measures have been put in place to avert disruption of learning in schools and other potential effects of the dry spell.

"Multi-sectoral interventions focusing on health, nutrition, peace, and security are all geared towards addressing the issues that could interrupt the normal learning, especially in the country’s drought hotspots, and reduce the vulnerability of the residents," read part of the statement.

"In this regard, emergency food supplies, water, and other non-food items will be provided to households, communities, and various institutions, including schools," it said.

The statement said a meeting on Wednesday attended by six Cabinet secretaries resolved to mobilise resources for dietetic intervention programmes, health and outreach screening, and enhancement of medical supplies to the affected areas.

"Pre-emptive interventions will be complemented by sustained sensitization campaigns on hygiene and sanitation and provision of water trucking services and rehabilitation and maintenance of strategic water facilities," said the CSs.

They said the focus will also be put on security and peace-building initiatives in counties prone to insecurity.

Other than the prompt response to crime and insecurity, the Cabinet secretaries said plans are underway to collaborate with other stakeholders on organising peace initiatives to avert inter-clan clashes over resources.

"Other measures under consideration include the provision of surveillance and animal health services to cushion herders against potential losses," they said.

According to the drought status report by the NDMA, this year's drought is not as dire as the one experienced last year.

The drought situation continued to worsen by February 2017, with over 15 counties hitting the Crisis level.

The severe drought resulted in loss of vegetation, reduced crop production, water and pasture scarcity which affected the health of livestock leading to less milk productivity.

January 4, 2018 report, UNICEF said drought conditions that kicked off in 2017 persisted into 2018 leaving 3.4 million people severely food insecure and an estimated 500,000 people without access to water.

Eighty-eight per cent of the children were from 23 arid and semi-arid counties.

According to the report, drought conditions led to a decline in school attendance and school participation and rising dropout rates.

Post a comment
WATCH: The latest videos from the Star
by EMMANUEL WANJALA @ItsWanjala
News
Sensitive
13 February 2019 - 18:00
Read The E-Paper