Comes with lower commission on fares, at 12%

•Besides having the lowest commissions in the industry , YEGO drivers are provided personal accident insurance at no cost and medical insurance to qualifying drivers. 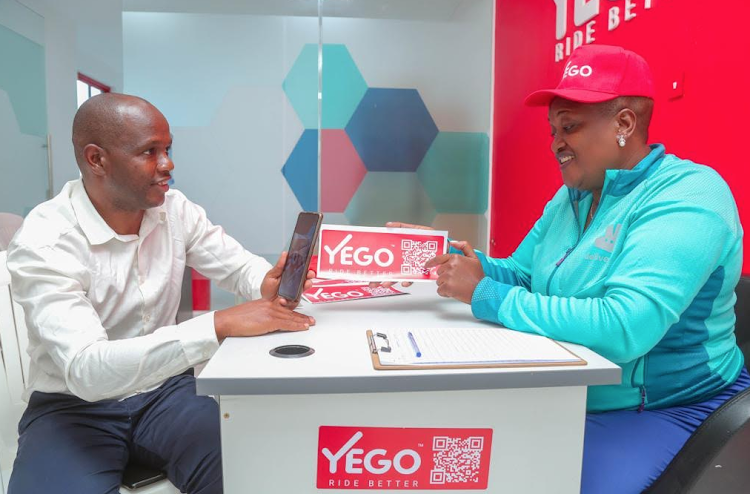 Martin Irungu, a driver is shown how use the YEGO QRcode taxi App by company employee Esther Wambui/HANDOUT

Kenya’s taxi-hailing market is set for a major shakeup with a possible price war between providers, which could finally grant operators their wish of a reduction in commissions.

This follows the entry of a new player–YEGO Global that announced the launch of its operations in Kenya yesterday, through its subsidiary – YEGO Mobility Kenya Limited.

It will provide customised taxi-hailing services that are set to revolutionise urban mobility in the country with better terms for drivers and fair fares for passengers, it said in a statement.

YEGO comes in with a 12 per cent commission on rides, which is below major market players–Uber which charges a 25 percent commission per single ride, Bolt (20 per cent) and Little (15 per cent).

Besides having the lowest commissions in the industry, YEGO drivers are provided personal accident insurance at no cost and medical insurance to qualifying drivers.

Fares will also be kept in line with the prevailing fuel prices and traffic situations, and drivers can withdraw their earnings on demand with the actual processing fees, management said.

A drivers’ SACCO is being set up and YEGO Mobility Kenya has committed to pay 10 per cent of its dividend to the SACCO to secure the drivers’ future, it added.

“We are providing a customised solution for Kenya, one that has been purpose built to free the driver community from the digital slavery of the Gig economy,” YEGO Global CEO and founder Karanvir Singh said.

YEGO Global has been operating in Rwanda since 2016 where it became the first licensee in the country to provide a smart mobility solution, using Intelligent Connected Fare Meters(ICFM).

It has invested over two years in the Kenyan project which Singh said has helped understand challenges faced by both drivers and passengers.

“We expect to have almost every driver in Nairobi join YEGO in the coming weeks….to earn better and ride better,” Singh said.

The move now opens a possible scramble for business with existing companies likely to be under pressure to reduce their commissions.

Last week, drivers under Uber Kenya, Little and Bolt platforms went on strike as they pushed for lower commissions charged on fares.

“These companies are taking a huge commission leaving drivers with very little after expenses such as licenses to operate, service, insurance and fuel. It is not fair,” a Little driver, who also operates under several other Apps, told the Star.

The rules are aimed at streamlining the sector as the authority moved to freshly licence ride-hailing companies.

Both existing and new entrants were asked to submit their application by October 17.

Post a comment
WATCH: The latest videos from the Star
by MARTIN MWITA Business Writer
Kenya
01 November 2022 - 12:03
Read The E-Paper