Some of the players signed by Nakuru for the new season include Centre Emman Okwako and backrower Rodgers Audi have joined the side from town rivals Menengai Oilers as well Leon Nyang’ who has been signed from Njoro-based Egerton Wasps.

•Nakuru last played in the playoffs in the 2018-2019 season losing to Mwamba 18-17 in an entertaining quarterfinal match. 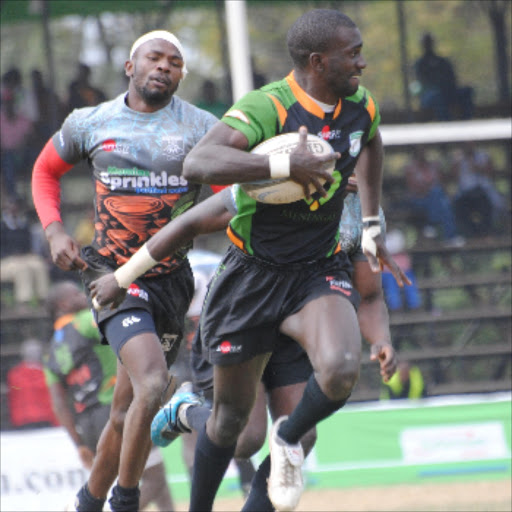 Nakuru RFC's John Kidera speeds up past a Mwamba opponent during a past tournament
Image: COURTESY

The 2013 and 2014 Kenya Cup champions Nakuru have set their sights on qualifying for the playoffs with the new season scheduled to begin on Saturday.

Head coach Felix Oloo said despite having young squad with an average age of 24, he's confident they can be in the mix for a top-six.

"We had nine weeks of extensive pre-season where we also sat down with the players and agreed that we want to be in the playoffs come the end of the season,” said Oloo.

The Rift Valley-based side failed to make it to the business end of the season last time out but Oloo, who doubles up as the Kenya Lionesses coach, said history will count for nothing.

"If we are to use last season as yardstick, then, ideally, Kabras should have won the league title. But this is a new season and my players are highly motivated to perform,” said Oloo.

Nakuru last played in the playoffs in the 2018-2019 season, losing to Mwamba 18-17 in an entertaining quarterfinal match.

The Wanyore face a baptism of fire in their early-season which they start against last season's losing semifinalists Strtahmore Leos.

They will then tackle losing finalists Kabras and champions KCB in quick succession.

Blad Blad will be their last encounter before the Christmas and New Year break.

"It won't be easy but we relish the challenge of playing the top four teams. This will be a test of where we stand as a team heading into the new season,” added Oloo.

With the World Cup qualifiers set for next year, Oloo said he expects his charges to put their hands up for selection by playing well.

"I believe there is an opportunity for my players to showcase their skills and who knows? They may find their way into the Simbas squad for the qualifiers,” he said.

Some of the players signed by Nakuru for the new season include centre Emman Okwako and backrower Rodgers Audi from town rivals Menengai Oilers as well Leon Nyang’ from Njoro-based Egerton Wasps.

Former Kenya Under 20 player, John Ochar from Homeboyz, Emmanuel Wabwile from Bungoma High and Wycliffe Odhiambo are also part of the new faces at the club.