Opiyo became a hot cake and his phone went berserk with constant calls from club officials who were battling for his signature.

•Opiyo took a keen interest in the game of football from a very tender age but stumbled upon a real chance to cut his teeth while at St. Andrews where the school's administration established a conducive atmosphere for blossoming in sports. 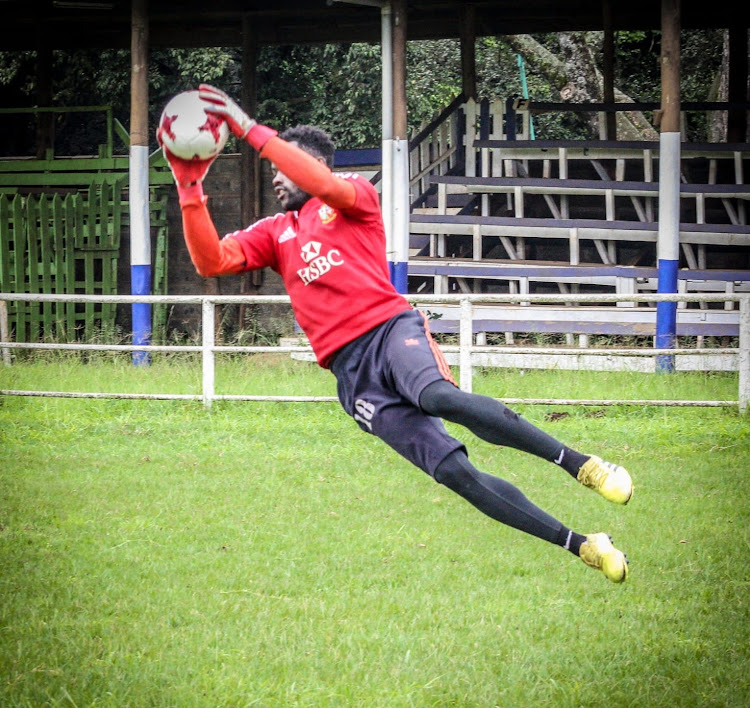 Earlier in March, a youngster stole the headlines after beating a strong pool of competitors for the Football Kenya Federation  (FKF) Player of the Month gong.

Posta Rangers custodian Kelvin Opiyo was in impressive form, nudging aside a vicious contest from Brazilian Wilson Silva of Gor Mahia and Zoo FC midfielder Alex Onchwari on his way to a historic feat as the third goalkeeper to have bagged the award that also comes with a Sh50,000 cash prize.

Few believed in the third-choice goalkeeper's capacity to rise to the occasion when the technical bench threw down the gauntlet to him after the first and second-choice keepers sustained serious injuries.

Opiyo took the challenge in his stride and pulled off excellent exploits between the sticks to maintain three clean sheets that fired his side to seven points out of the nine secured in the month.

Indeed, the scintillating custodian is living his childhood dream after years of resilience and determination. All along, he battled tooth and nail for his space in the goalkeeping world while clinging to the conviction that his glorious moment loomed somewhere along the way. And it came to pass.

The last born in a family of four (two boys and two girls), Opiyo was born on March 21, 1995, in Nakuru County. He attended St. Andrews Turi Academy before joining Sulgwita High School and Molo Secondary School.

Opiyo took a keen interest in the game of football from a very tender age but stumbled upon a real chance to cut his teeth while at St. Andrew's where the school's administration established a conducive atmosphere for blossoming in sports.

“I began playing football when I was still very young. That was at St. Andrews Turi Academy.”

Meanwhile, away from school, he had a mentor in his sibling who happened to be playing for a local team as a goalkeeper. 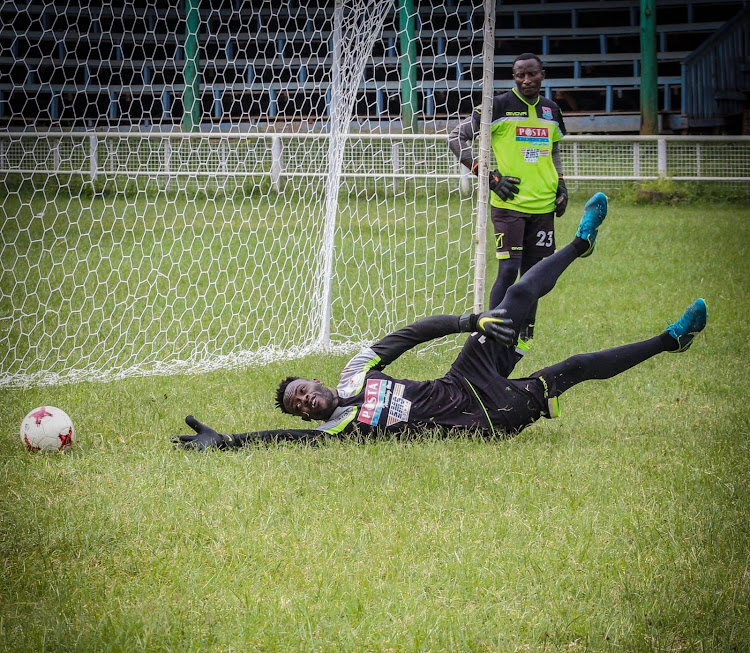 “My big brother, Maurice Opiyo, was actually my first keeper trainer when I was playing in the under 15 tournaments.”

“My brother used to feature for local clubs as a goalkeeper. He saw my potential and kept pushing me until I once tried out for Mathare United but I wasn't fortunate enough to join the side.”

Opiyo said he drew a lot of inspiration from veteran Bayern Munich and Germany shot-stopper Oliver Khan. “I grew up following Oliver Khan. He was my role model.”

Opiyo was determined to succeed as a goalkeeper and didn't allow any room for complacency. His resilient character propelled him to the heights he desired. Before he knew it, he was picked by his high school coach as the first choice keeper right from Form One.

“I featured for the high school team for four consecutive years before I finished and joined the Eldoret Polytechnic.”

Although the school never got to scale the heights, Opiyo kept pushing on unfazed. He relishes the moment he won his first title with the college team five years later.

“The furthest I went with the high school games was regional quarter finals at Nakuru High School. However, I won one title with Eldoret Polytechnic at the college games.”

His uncompromising passion for football proved costly in the end after he found himself at a crossroads. Eventually, he had to choose between massaging his interest in football and shifting his focus to studies. Opiyo chose his boots over his books.

“I was admitted to pursue Chemical Engineering at Eldoret Poly but I dropped out because it became increasingly difficult for me to juggle football with education. I abandoned my studies and penned a deal with Nakuru National Super League side, Top Fry.”

Meanwhile, his hard work and persistence in training was gradually bearing fruits. He began to get attention from some of the top teams in the country. 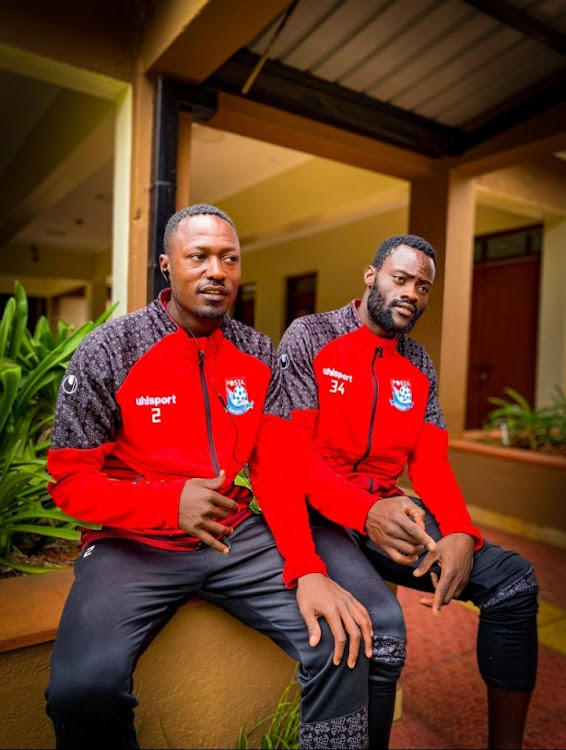 “During the college games, I was spotted by Richard Muthomi who owns National Super League side, Top Fry. He was impressed and asked me to join his team. At the moment, the current Tusker assistant coach George Maina was in charge of the side. He, however, left thereafter and Ezekiel Akwana took over the reins.

“I featured for the side for a whole season between 2015 and 2016 as first-choice keeper under coach Akwana. I left to join Thika United in the following season.”

So good was he that he didn't have to attend trials to prove his mettle. He found himself comfortably fitting in the big shoes of a first-choice goalkeeper the moment he landed a dream job with Thika United.

“No, I didn't attend trials at Thika but coach Nicholas Muyoti spotted me in action at Thika Stadium while turning out for Top Fry against Bidco United.”

“I featured for Thika in the Kenyan Premier League for two seasons before we were relegated to the NSL where I turned out for them for a whole season.”

Opiyo became a hot cake and his phone went berserk with constant calls from club officials who were battling for his signature.

“I then joined Vihiga United and later APS Bomet respectively both in the NSL. I didn't stay at APS for long and left to link up with Posta Rangers after only six months.”

“I have played under three different coaches at Posta Rangers. I signed for them when Sammy Pamzo Omollo was the coach. Later Stanley Okumbi took over before he too left to pursue a coaching course in Germany. He was replaced by Salim Ali.

Like any other player, Opiyo reminisces about his glorious moments in football.

“My best moment came when I was voted the KPL player of the month. I also experienced the same joy after winning the under 15 tournament trophy held with St Andrews School, Turi where I was also voted best player."

That notwithstanding, he doesn't hesitate at all to reveal the skeletons in his closet as well.

“Missing the clean sheet award last season by two games left me heartbroken despite playing fewer games than the winner. Another low moment for me was when we lost two finals while turning our for St. Andrews Turi in the under 15 and under 16 tournaments.” 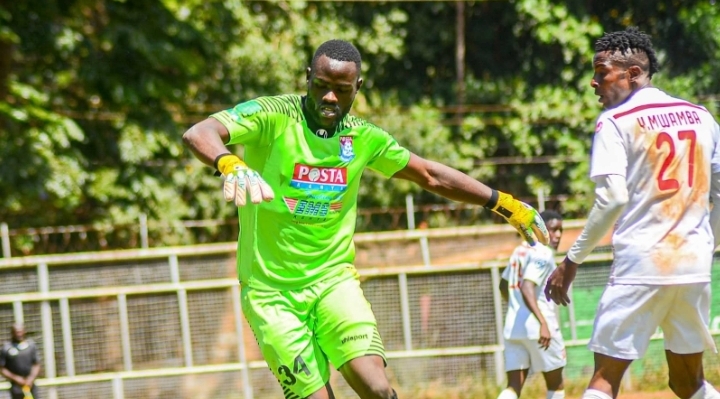 Opiyo says his eyes are firmly trained on turning pro in the near future and he cherishes the thought of boarding a plane to South Africa although a trip to neighboring Tanzania would be welcomed too.

“My lifetime dream is to feature for Mamelodi Sundowns in the South African top tier. I would wish to pen a deal with the Tanzanian side, Yanga just as well.”

He clings on to the hopes he will one day fly the country's flag high on the international stage.

“It is my wish to wear the national team colours someday in the future. That's my biggest dream and I bet every player savours a chance to play for the national team because it gives one some good exposure and boost a player's profile.

Opiyo is urging budding footballers to pursue their dreams while reminding them that they must work extremely hard to attain their goals.

“It's good to maintain discipline, work hard, be persistent and pray a lot. It's difficult with a lot of challenges so succeeding requires one to have a lot of passion for the game.”

He hasn't given up on his academic pursuits and says he already has a plan in place to go back to college and walk the full stretch.

“As I continue to focus on my football career, I'm planning to go back to school so that I can complete my engineering course. I'm also looking forward to securing a scholarship to study in Canada soon. Hopefully, all will be well.”

And after an average season in the Kenyan Premier League, Opiyo has vowed to fire his side to their maiden top-flight title once the competition resumes.

“I'm not really satisfied with our performance this season and believe we could have done better. There are a number of factors that affected our performance.

“Salary delay is the main factor that hindered our season performance. The technical bench also changed twice so it was difficult to adjust while at the same time containing the pressure from opponents. 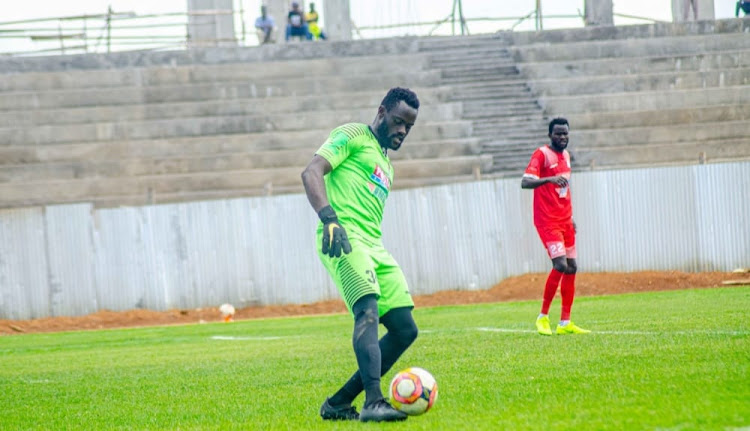 Posta Rangers goalkeeper Kelvin Opiyo in a past KPL match at Bukhungu Stadium.

“We let the title slip through our fingers given in the second leg at the time coach Okumbi left, we were fourth in the standings with just five points adrift Kakamega Homeboyz.

The custodian called out local referees saying they ought to polish their act ahead of the new season.

“There is great need for local referees to up their game. I think they got their calls wrong most of the time in our matches. Anyone who attended our matches could see we were being were victims of substandard officiating. However, that's water under the bridge now.”

“Tusker deserved the title. They were consistent and with quality players who showed passion for winning too. Plus, good management seems to have helped them quite a lot.”

But he has put all their rivals on notice, warning them to expect a vicious battle next season.

“Next season, I'd like to be the top goalkeper in the league by maintaining a clean sheet. Hopefully I'll also earn a maiden national team call up.

“Our team's objective is to wrap up the new season in the top four, or better still charge for the title.”

And just what does Opiyo do away from the football pitch during his free time?

“I spend much of my free time watching movies and listening to music. Sometimes I go out to cycle as well.