Liverpool not in dreamland yet, says Klopp

“Coming here and winning an away game in the Champions League is tough. Obviously, Benfica fought for their lives,” said Klopp.

• Diaz, jeered throughout because of his history with Benfica’s domestic rivals Porto, was making his first Liverpool start in the competition but continued his seamless beginning to life with Klopp’s side and proved a threat throughout.

• Ibrahima Konate rose highest to head the visitors into the lead from a corner before Sadio Mane added a clinical second to dampen the mood at a lively Estadio da Luz in a dominant first half.

Liverpool will take a two-goal lead into the Champions League quarter-final second leg at Anfield but Jurgen Klopp says his side are “not in dreamland” after an important victory over Benfica in Lisbon.

Luis Diaz scored late on to put Klopp’s side in control of the encounter but they could have been out of sight were it not for a number of fine saves from Benfica goalkeeper Odysseas Vlachodimos.

Ibrahima Konate rose highest to head the visitors into the lead from a corner before Sadio Mane added a clinical second to dampen the mood at a lively Estadio da Luz in a dominant first half.

The home fans ramped up the noise again shortly after the interval when Konate’s mistake allowed sought-after striker Darwin Nunez to pull one back for the Portuguese outfit and make it a contest.

But the Premier League side will have a healthy advantage when they welcome Benfica in the second leg on Wednesday after Diaz added a late third with a composed finish after rounding Vlachodimos, who also denied Diogo Jota in the final moments.

“Coming here and winning an away game in the Champions League is tough. Obviously, Benfica fought for their lives,” said Klopp.

“We could have scored in the last minute — the fourth one would be nice but we’re not in dreamland here.

“It’s half-time, we know much more about our opponent, they will go for it again. They won at Ajax, they ground out all the results out in the group stage that they needed, so we are aware of the quality and now we have a nice game in between and then we will be ready again for Benfica.”

This was a near perfect start to a mammoth run of games for Liverpool that will define their season, with the return leg sandwiched between Sunday’s game at Premier League leaders Manchester City and an FA Cup semi-final against Pep Guardiola’s side six days later.

The Reds are chasing a historic quadruple and have already won the Carabao Cup this year, despite Klopp saying four trophies is not a realistic target and insisting winning just one other competition this term would be “outstanding”.

Their progress in Europe now looks set but it was not comfortable for the visitors until Diaz skipped round goalkeeper Vlachodimos to score his side’s third with three minutes to go. 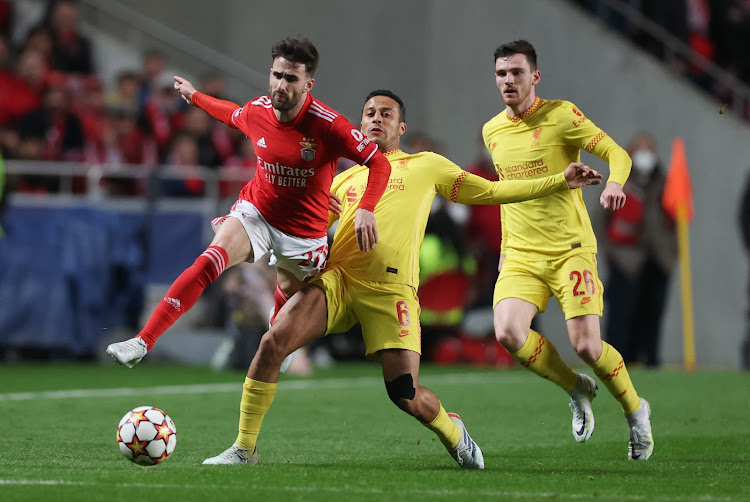 Diaz, jeered throughout because of his history with Benfica’s domestic rivals Porto, was making his first Liverpool start in the competition but continued his seamless beginning to life with Klopp’s side and proved a threat throughout.

He had earlier been denied by Vlachodimos, who stopped Mohamed Salah adding a third before the break as well as keeping out Jota late in the second half.

Liverpool were completely in control early on and were already threatening before Konate was left unmarked to head in Andrew Robertson’s corner to score his first goal for the club.

The visitors then ruthlessly punished a poor touch from former Tottenham and QPR midfielder Adel Taarabt, as Trent Alexander-Arnold angled a superb ball into Diaz and the forward cushioned a header into Mane’s path to give him a simple finish.

Benfica, who upset an in-form Ajax side in the previous round, responded four minutes into the second half when Konate missed his kick from Rafa Silva’s low cross and 22-year-old Uruguay forward Nunez showed why he is so in demand with a composed finish from close range for his fifth goal in the competition this season.

That gave the home side belief and, buoyed by the intense atmosphere their fans created, Benfica suddenly looked a different team as Everton tested Alisson from range and Nunez failed to convert after breaking in behind the defence, instead going down under pressure from Virgil van Dijk only to see his penalty appeal waved away.

But it was Diaz who stole the show late on and Klopp’s attention will now switch to a huge game against City in the race for the Premier League title.

“I have advised him to continue his journey at a club other than Liverpool, but his direction now is to renew his contract,” Sobhi said.
Sports
2 months ago

The Netherlands face hosts Qatar, Senegal and Ecuador in the group stages of the World Cup which kicks off in November.
Sports
2 months ago
by BBC
Football
07 April 2022 - 00:00