Odipo prides himself in propelling Talanta to the top tier

“My big break came when I was in secondary school, when Diego Romano (former Gor coach) spotted me and drafted me in the Gor squad for the 2004/2005 season."

•Odipo prides himself in having played with and against some of the best players of his generation, but when pressed to single out who stood out he picks Humphrey Mieno, Collins ‘Gattuso’ Okoth and Peter ‘Pinchez’ Opiyo. 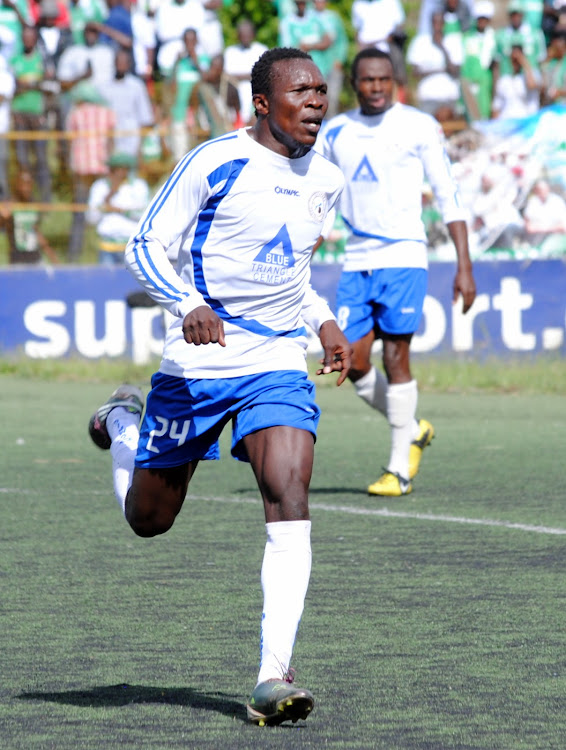 Maurice Odipo during his days at Sofapaka
Image: FILE

Maurice Odipo is the epitome of humility for someone who has enjoyed immense success as a footballer at club level.

Despite his earlier achievements, the veteran midfielder says guiding Talanta to gain promotion to the country's top-flight league is his greatest moment in his trophy-laden history.

“Don’t get me wrong, I enjoyed every bit of the cups that I won but leading Talanta to the Premier League is a great achievement. Football in the National Super League is very competitive and unpredictable.

Every team is at par and so for us to gain promotion was no mean feat. That is why I consider it a huge part of my football journey,” explained the two time Kenyan Premier League winner with Tusker.

Odipo, who was born in Parklands estate in Nairobi before moving to Jericho estate always wanted to be involved in ‘the beautiful game’ from the time he was a five-year old.

“I started playing my football in Kariobangi South when I was 12 years old for a team called Daring Club under the mentorship of former Tusker FC assistant coach Leonard Odipo who also happens to be a coaching instructor.” narrates Odipo.

As a youngster he was not short of role models and his big brother Moses Onimbo was one of them.

“It was easy for me to take up football seriously at a young age because my brother (Moses) used to play for KCC Nairobi. So I had no problem getting equipment like boots and training gear.

Moreover, most of my teammates at Daring came from families which could provide kits, so we learned being serious footballers right from our pre-teen days,” said the ever smiling 32-year-old who looked up to retired Brazilian World Cup winning striker Ronaldo. 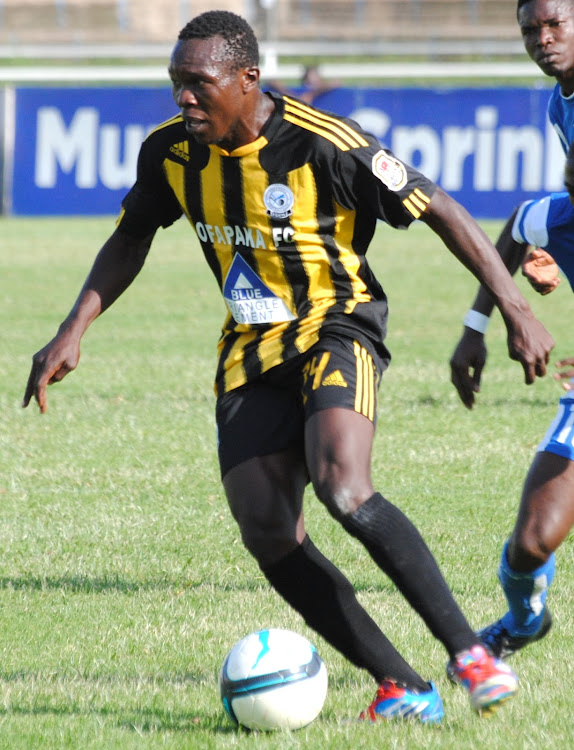 Maurice Odipo formerly of Sofapaka in past action
Image: FILE

“I watched him at the 1998 World Cup in France and he was just phenomenal. He had speed, power and was a lethal finisher so I wanted to be like him even though I was not as quick,” Odipo chuckled.

Constantly playing in tournaments, where top coaches and high calibre players were among spectators meant it was just a matter of time before Odipo caught the eye of an influential figure in the game.

“My big break came when I was in secondary school,when Diego Romano (former Gor Mahia coach) spotted me and drafted me in the Gor Mahia squad for the 2004/2005 season.

"That was a period that the league was in turmoil but just being part of a club that had such amazing history only whetted my appetite to play at the highest level possible,” recalled Odipo.

With things seemingly unstable on the home front, Odipo crossed the border to Uganda in pursuit of his football dream.

“I joined Kampala City Council towards the end of 2005. I played there briefly before returning to Kenya to join Tusker,” said Odipo.

His return coincided with a period when for the first time in years, Kenyan top-tier football was beginning to have some semblance of professionalism. SuperSport had come in as broadcast sponsors of the Kenyan Premier League and suddenly some broke clubs who depended on pockets of well wishers were awash with millions.

“I think the time I was in Tusker was the best for footballers at different clubs. There were no complaints about delayed salaries and our football was being broadcast across Africa. All players had to do was showcase their talent and attract the eyes of clubs outside the country,” said Odipo who would go on to lift four league titles (2007, 2011, 2012, 2016) with the brewers. 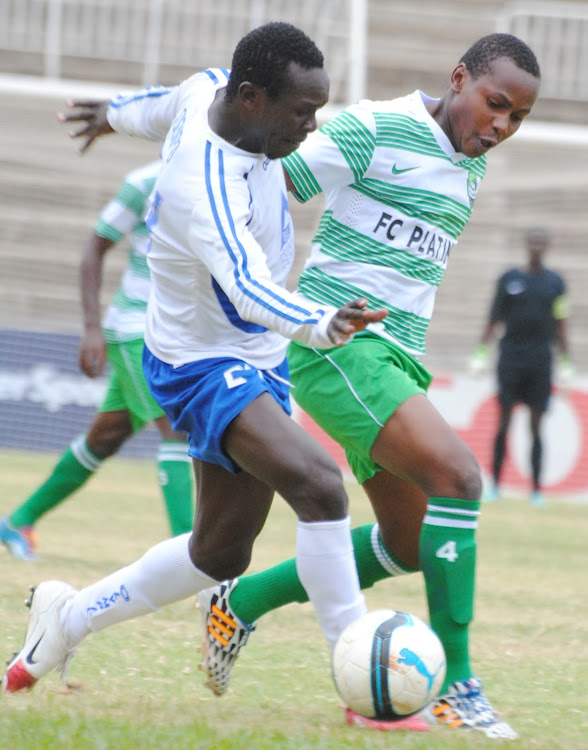 Odipo (L) vies for the ball with Simon Shoko of Platinum (Zimbabwe) in a past continental tournament match.
Image: FILE

“My biggest achievement at Tusker was lifting the Cecafa Club Championship in Tanzania under coach Jacob Ghost Mulee in 2008,” he said.

As succesful as he was and watching teammates like Patrick Osiako and  Allan Wanga get deals to play abroad, Odipo’s biggest regret was not getting a link to play in Europe.

“At that age if I could have pushed harder, I could have gotten a chance to play in Europe. But God as always has his own plan for everyone,” Odipo said.

Odipo prides himself in having played with and against some of the best players of his generation, but when pressed to single out who stood out he picks Humphrey Mieno, Collins ‘Gattuso’ Okoth and Peter ‘Pinchez’ Opiyo.

“I think I got the privilege to play with the best. I can’t even tell because the standards were very high. This three were on top of their game, calm and assured in their roles. There are many more, because every team had there stars but this trio were on a different level,” he stated.

He has worked with quite a number of tacticians, among them Jacob Ghost Mulee, Robert Matano, Sammy Pamzo Omollo, Ken Kenyatta, Zedekia ‘Zico’ Otieno, Leonard Odipo, Diego Romano, Paul Timbe, and Sam Simbwa. Yet, he finds it extremely difficult to single out his favourite.

“I have worked with the best coaches in Kenya and outside the country. If I tell you to choose among them who is the best who will you choose? I know it can be also hard for you,”he said laughing.

Now, having been part of the Talanta team that gained a historic promotion from NSL ,and one of a handful of players to have played in the premier league, Odipo has the following advice for his teammates as they look to make their topflight debut in October.

“NSL is very tough because some of the players are still row and have no experience. Then it is so much physical than the top league. In KPL, one mistake one goal, so much experience and brain work is utilised,” he observed

“Also the matches are so much tactical with few moments to kill the game and high calibre coaches in every team. So you cannot afford to switch off at any moment because you will be punished.”

Odipo, however, is quick to point out that the presence of coach Kenyatta in the dugout will help ease off the pressure.

“Coach Kenyatta might look serious on the bench but as a person, he is a parent and has so many jokes outside the pitch. He is very passionate about football. 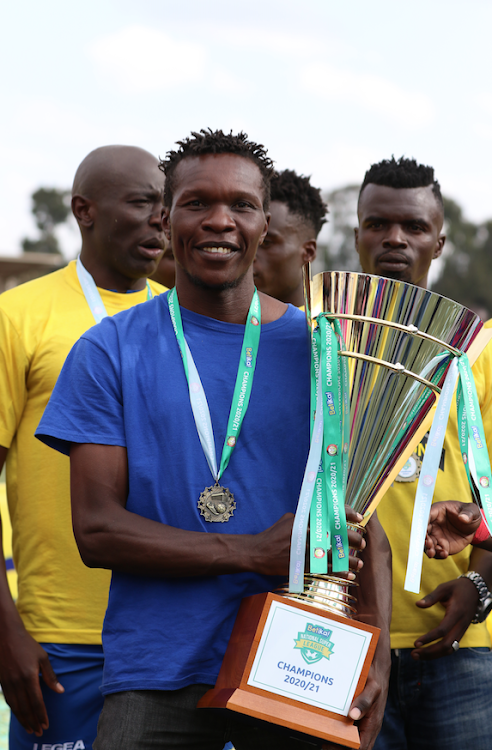 "In the field, he is very strict with his work. He can push you severely to get the best out of you. So I believe he will be of great help in our transition to the Premier league,” noted Odipo.

Normally, promoted teams largely due to lack of experience are always among the relegation candidates, so what does Odipo expect of Talanta?

“It's not going to be easy. My target is to show them how to cope in the Premier league. Hopefully, we will be in a good position come end of season and remain in the league,” concluded Odipo who scored five goals and provided five assists as Talanta finished top of the NSL table with 65 points, four more than second-placed Vihiga Bullets.