The 2020 Istanbul Half Marathon champion literally took matters into her own legs, surging ahead to establish daylight between herself and the leading pack.

•Kipyogei led a clean Kenyan sweep of the podium places, timing 2:24:50 to cut the tape ahead of  Boston champion Edna Kiplagat and Mary Ngugi

•The Iten native described her victory as a product of hard work and support from family, friends and coaches

•In the men's race, Prague Marathon champion Benson Kipruto also pulled away at the 22km-mark to win the men's marathon in 2:09:51 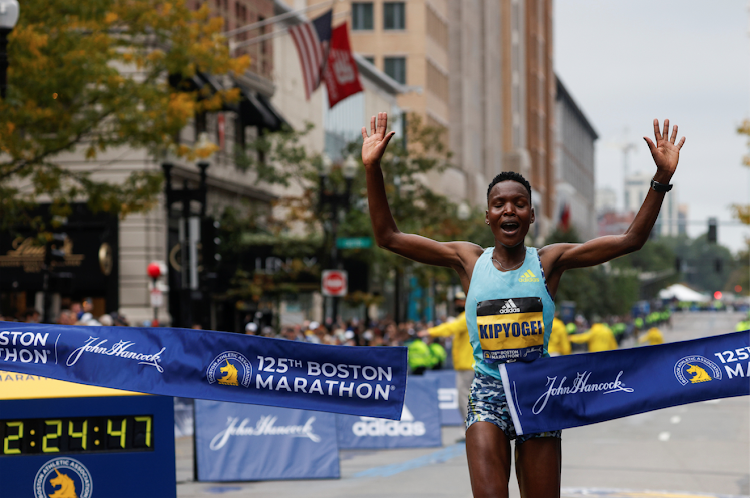 Diana Kipyogei celebrates as she crosses the finish line at the Boston Marathon.
Image: REUTERS

After producing a masterclass performance to clinch her first road race win in her career, Kenya's Diana Kipyogei admits she had to take charge of the women's marathon as the pace was not to her liking.

"I saw that the pace was slow and so I just decided to take charge and kick on. Luckily, my body responded and I was able to hold on to the lead to the end. You know the course is also tough and so this makes the win more worthwhile," Kipyogei said.

The Iten native was over the moon, describing her victory as a product of hard work and support from family, friends, coach and management team.

"I thank God and I am very happy to have won this race. I thank all those who have supported me all through the preparations for this marathon, including my family and friends, relatives back at home, my coach, management team and physiotherapist," he said.

After tagging along with the leading pack until the 30 km-mark, Kipyogei literally took matters into her own legs, surging ahead to establish daylight between herself and the rest.

However, 2018 world half marathon champion Netsanet Gudeta of Ethiopia briefly threatened to spoil the day for the Kenyan but Kipyogei was able to further widen the gap as Gudeta seemed to have wilted.

This allowed Kiplagat, winner of the marathon in 2011 and 2013, to blaze past the Ethiopian to secure second — a just reward for the 41-year old who had vowed beforehand to work hard for a podium finish.

In the men's race, Prague Marathon champion Benson Kipruto also pulled away at the 22km-mark to win the men's marathon in 2:09:51.

Kipruto surged forward into the lead at the 22km mark just when it seemed as if American CJ Albertson was on course to write one of the greatest storylines of the Boston Marathon with what seemed an insurmountable lead.

"It is a wonderful feeling to have produced this performance. Boston is not a fast course and we did not have any pacers so the decision to make my move was more of a teamwork."