The 23-year-old intends to give the Rwanda Automobile Club (RAC) organized round a good push albeit cautiously.

• This will be Hamza's second appearance in the Rwandanese fixture and he's hoping to break his duck this time round following his retirement at last year's edition of the event. 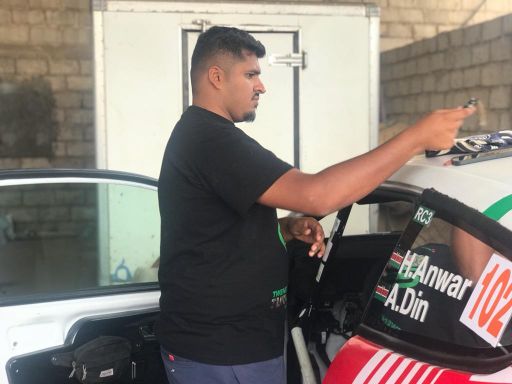 Hamza Anwar in a past action
Image: /HANDOUT

Seeking success on the fifth round of the Africa Rally Championship (ARC) in Rwanda this weekend, FIA Rally Star Hamza Anwar will be looking for a strong finish behind the wheel of the M-Sport Poland prepared Ford Fiesta Rally3.

The 23-year-old intends to give the Rwanda Automobile Club (RAC) organized round a good push albeit cautiously.

This will be Hamza's second appearance in the Rwandanese fixture and he's hoping to break his duck this time round following his retirement at last year's edition of the event.

"I sat with Dennis Mwenda in Rwanda last year and we were actually lying third; but unfortunately our dog-box decided to pack up. Rwanda is a really good rally, a flat out kind of event where you really got to show commitment."

Hamza believes the only way out is to to drive sensibly fast: "For us, the plan is to go flat-out. Where it's smooth we are going to push, as very few places have caution. So we are going to give it a good push but also consider the face that we have to bring the car home in one piece."

Asked about his championship prospects, Hamza continued: "We are lying second in the Junior ARC category for Under 28s, so we hope to maintain our position or hopefully try and win the class."

He is returning to Rwanda re-energized and with a different navigator in Adnan Din. "I am really happy to be joined by Adnan especially for Rwanda. We have gelled well this year and done a season together. I have had my ups and downs with navigators but now I have finally found the one. So I am happy and confident going into the event this weekend."

The Rwanda Mountain Gorilla Rally will provide one of the championship’s most picturesque settings.

Friday itinerary begins with two passes of the 1.35km Free Practice (ARC cars only) in Kigali from 15:00hours onwards.

This will be followed by another two passes of Shakedown (pre-registered non-ARC drivers) at 16:08hrs. The qualifying stage will see the drivers perform another two runs of the same 1.35km stage from 17:08 onwards at the Kigali Convention Centre ,(KCC).

After qualifying, the top five drivers will savour the privilege to choose their starting orders for action proper on Saturday.

Sunday's short itinerary has two repeated stages at Kamabuye (27.07km) and Gako 8.40km) which total to a 70.94km competitive run. The event will revolve around Kigali City and the Eastern province of Rwanda in Bugesera District.

Reconnaissance for the qualifying stage, will be done on foot on Friday morning

The Nairobi-based driver will renew his rivalry with Jasmeet Chana aka ‘Iceman’ who trails him by a just point on the championship log.
Sports
3 weeks ago

The 2014 Motorsport personality of the year alongside his navigator Deep Patel have been panel-beating their Mitsubishi Evo X ahead of the rally.
Sports
3 weeks ago
Post a comment
WATCH: The latest videos from the Star
by SAMSON ATEKA
Sports
23 September 2022 - 05:00
Read The E-Paper