• The Dutchman was fastest from Bottas in the first session, while Hamilton lagged behind his team-mate all day over one lap.

• Both Gasly and Ferrari’s Charles Leclerc went off the track and skirted with the gravel traps — which are a long way from the racing surface — but managed to continue.

Mercedes’ Valtteri Bottas set the pace in Friday practice at the Qatar Grand Prix as the Formula 1 title battle heads into its final three races.

The Dutchman was fastest from Bottas in the first session, while Hamilton lagged behind his team-mate all day over one lap.

There were no major incidents as drivers and teams familiarised themselves with the Losail circuit outside Doha, which is hosting its first grand prix and is better known for motorcycle racing.

Both Gasly and Ferrari’s Charles Leclerc went off the track and skirted with the gravel traps — which are a long way from the racing surface — but managed to continue.

Hamilton starts the weekend 14 points behind Verstappen in the championship and never appeared that quick over one lap all day.

However, the seven-time champion was marginally the fastest driver on the race-simulation runs later in second practice, from Verstappen and Bottas.

The day took place against the backdrop of Mercedes’ request for a right of review of the lap 48 incident at last Sunday’s Sao Paulo Grand Prix, when Verstappen forced Hamilton off track.

The request for a review was rejected on the basis that the new evidence submitted - on-board camera footage from both cars - was not “significant”.

Drivers are expected to discuss the ramifications of the incident for racing in their briefing with race director Michael Masi on Friday evening. In a bad-tempered news conference, rival team bosses Toto Wolff of Mercedes and Red Bull’s Christian Horner exchanged barbs, and Horner implied he would protest Mercedes’ rear wing at one of the final two races of the season in Saudi Arabia and Abu Dhabi if it behaved in the same way as they felt it did in Brazil.

Horner accused Mercedes of running a rear wing that flexes under aerodynamic load to boost straight-line speed. Wolff said it had been checked many times and been found legal. So it was ironic that the rear wing on both Red Bulls could be seen to be oscillating when the DRS overtaking aid was deployed during the second session.

Red Bull spent some time repairing the DRS flaps on both cars to stop this happening. Hamilton was wearing a new helmet design sporting the pride rainbow colours designating support for LGBTQ+ rights, a day after he said that countries such as Qatar and Saudi Arabia, which hosts its maiden grand prix in two weeks’ time, “need scrutiny”. 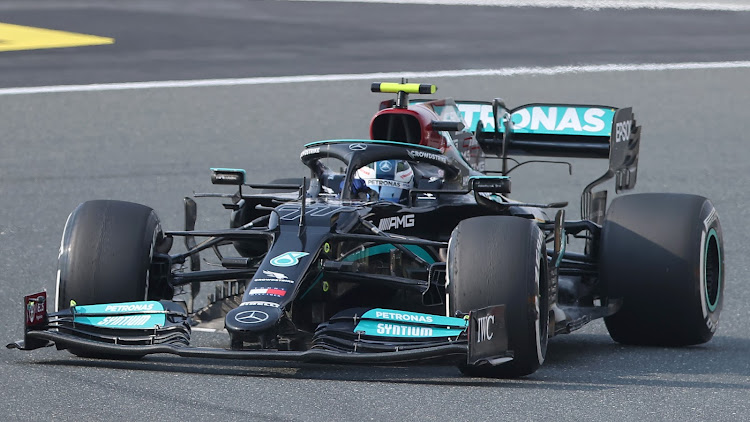 Mercedes' driver Valtteri Bottas drives during the first practice session ahead of the Qatari Formula One Grand Prix at the Losail International Circuit on November 19
Image: AFP
by By Andrew Benson
Sports
20 November 2021 - 00:00