• There is no cause in this country worth sacrificing for.

• If Atwoli, the Luhya and all others who will see the light, choose to cross over to the government, it’s because we live in difficult times 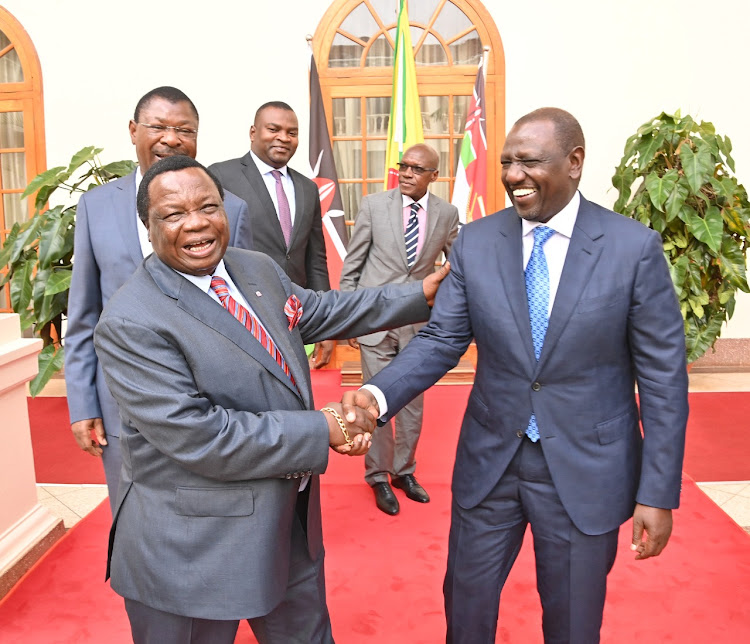 As soon as pictures went out of Cotu secretary general Francis Atwoli acting all chummy with President William Ruto at State House last week, sections of Azimio coalition branded him a turncoat and political chameleon.

It was thoroughly unfair to the long-serving workers’ boss.

Given all the things Atwoli boss had said about the then Deputy President and UDA presidential candidate, I would have been shocked if bookmakers were still taking bets on a possible public handshake between the two gentlemen.

In modern times, it is foolhardy to imagine that the leader of the workers’ umbrella body can afford to be hostile to a sitting government, first, because the welfare of the members of his giant organization is better underwritten by government patronage, but more importantly, after what happened to former Knut boss Wilson Sossion, his own removal from office can easily be arranged in high places.

There is, however, a bigger philosophy at play here.

Within ODM boss Raila Odinga’s circles, it is presumed that only he can shake the hands of erstwhile opponents without being branded a traitor. After nearly every election since 1997, Raila has turned his back on former colleagues, made peace with the sitting government and helped define the destiny and shape of the very next general election.

In a self-entitled sort of way, the Raila political machine has created the perception that when it is him making the deals, there is no betrayal, but others shouldn’t have the leeway to serve their own political interests like he does. This belief is being turned on its head as many Azimio politicians begin to chart their own independent paths, euphemism for “working with government to help my people”.

Atwoli’s pilgrimage to the seat of power came soon after Luhya politicians met with Prime CS Musalia Mudavadi to pledge support for the latter, and for the umpteenth time, declare the start of a new path to Luhya unity. This quest for unity among the Luhya people has to be the eighth wonder of the world.

History says it was first mooted by the late Musa Amalemba in the late 1950s. So it is entering its 70th year with no sign of fruition. I see the difficulty in achieving Luhya unity wrapped in two packages. One, the disparate forces within the many Luhya subtribes do not allow for the rise of a central figure of reverence.

And two, unlike the other big tribes of Kenya who vote as blocks, the Luhya do not quite have a universal political issue to rally around, like the loss of power and rabid desire to get it back, for the Kikuyu in 1978 and the Kalenjin in 2002, or indeed, the marginalisation suffered under successive regimes, which unites the Luo community.

However, with one of their own, PCS Mudavadi, holding the third highest seat in the executive, and another, Speaker Moses Wetangula, leading the second arm of government, there is no better time than this for the Luhya nation to return to the corridors of power, without feeling like they owe anyone a political debt.

I am in total agreement with the statement they issued after their meeting, declaring that they were exploring new political paths. In the last Parliament, they supposed worked with the government until the last day. There precedent was set, and no one is now destined to hold fort for opposition forces in an era where the stomach is king and government largesse fuels the different turns to eat.

The common perception in this country is that political parties drive the agenda in pursuit of power. I hold that in fact that is the preserve of tribes and tribal networks within those parties. For example, whereas a Kenyan political party may parade faces from different ethnic communities to flaunt its national appeal, and trend pictures from its NEC and PG meetings, by night, the party leader routinely retreats to exclusive sessions with trusted handlers to make the real decisions in vernacular, as they chew goat ribs washed down with frothy drinks and misogynistic jokes.

A political party in this country, for all intents and purposes, is a foundation for the party leader’s and his community’s desire for state power. This is why after every election, it is in the interest of every community to “work with the new government”, if the candidate they propped up didn’t win. And as far as brother Atwoli is concerned, none spent more in time, personal fortune and reputation in pushing for a Raila presidency.

As far back as 2018, the small team planning how Raila would conquer the mountain, including folks such as Peter Kenneth and Maina Kamanda, regularly met at the Cotu leader’s Ildamat Ranch in Kajiado. He then became a consistent face all through the campaign, unleashing the most vicious verbal assaults on Raila’s opponent, Ruto.

In terms of burning bridges, Atwoli burned many for the cause. In a way, he has, therefore, paid his debts and should be able to cross over when pragmatism of the moment demands.

To understand this better, we have to examine the fate of those who stood strong to the end, especially the IEBC four. Commissioners Juliana Cherera , Justus Nyang’aya, Francis Wanderi and Irene Masit must have stuck out their neck in rejecting the results read out by IEBC chairman Wafula Chebukati at Bomas, on the belief that there was a system in place to protect them and invalidate what they considered to be fraudulent results. But they were largely left to their own devices.

I am sure some, or all of them, now wish they would go back and flow with the tide, because the opposite does not pay. Indeed, the problem at Bomas of Kenya cannot merely be confined to Election Day results, but an event that happened nearly five years earlier.

The handshake between then President Uhuru Kenyatta and ODM chief Raila Odinga in March 2018 was borne out of an electoral dispute. Indeed, Raila had even boycotted the repeat election ordered by the Supreme Court in 2017, for the simple reason that it was being conducted by the disgraced Chebukati.

At the very least, the handshake should have placed electoral reforms as the main, if not the only, agenda within the subsequent four years. If the IEBC had been reformed and Chebukati possibly removed, we would never have had the IEBC four practically sacrificing themselves for a system that left them out to hang alone.

Because of the foregoing, I submit that there is no cause in this country worth sacrificing for. If Atwoli, the Luhya community and all others who will see the light, choose to cross over to the government, it’s because we live in difficult times and reality demands we adjust to it.

Let us all work with government and make (or protect) money while at it. In any case, the dynamics of the next five years might be so different that holding onto any principles or political beliefs of the past five years may all be vanity.

Atwoli, Mudavadi agree to work together after a meeting

Mudavadi said that they consulted on how to develop the Western region.
News
3 months ago

This is what democracy is.
News
4 months ago
Post a comment
WATCH: The latest videos from the Star
by COLINS AJUOK
Siasa
11 December 2022 - 10:03
Read The E-Paper