BACK TO DRAWING BOARD

His image as being invincible and battle-hardened is dented. His prowess as a strategist and mobiliser in dispute. He must reorganise himself and his troops.

• Mt Kenya MCAs voted with little or no opposition to endorse the proposed BBI constitutional amendments.

• The loss in Kabuchai and Matungu constituencies to Ford Kenya and ANC, respectively, rubbed salt into Ruto’s wounds. 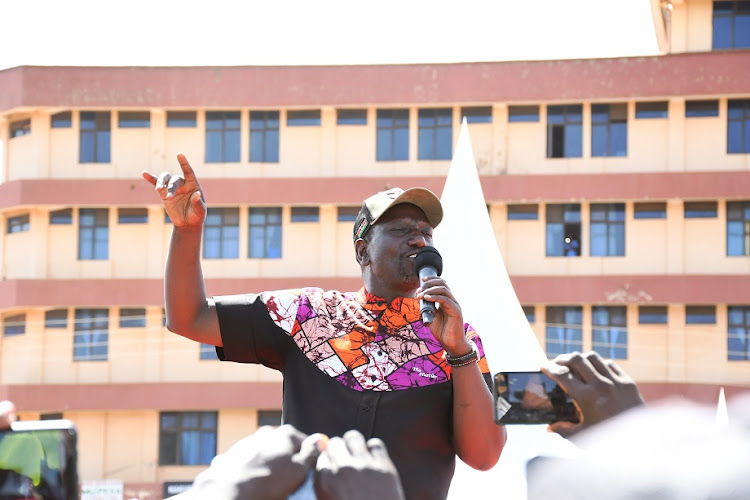 Six by-elections were held in the week ending March 5 in which the United Democratic Alliance party associated with Deputy President William Ruto participated.

The polls were to fill in vacancies caused by deaths in two constituencies in Western and four wards. Two wards were in Nakuru county and the rest in Kisii and Uasin Gishu. There was also a ward election in Makueni county but that pitted Kalonzo Musyoka against Governor Kivutha Kibwana.

UDA managed to win only the London ward in Nakuru — narrowly and at a heavy price. In the other races, it finished third at best. These defeats were punishing considering that the BBI train had just romped home the previous week with the overwhelming majority of county assemblies passing the BBI Bill.

Mt Kenya MCAs voted with little or no opposition to endorse the proposed BBI constitutional amendments. This was despite Murang’a Senator Irungu Kanga’ta saying the initiative was unpopular in the region.

This was a clear indicator that it is President Uhuru Kenyatta, and not Ruto, who controls the ground.

The loss in Kabuchai and Matungu constituencies to Ford Kenya and ANC, respectively, rubbed salt into Ruto’s wounds.  He has a bloated assembly of vocal MPs from Western Kenya but his popularity in the region seems to be overrated.

One would have expected his team to easily replicate the Msambweni act in the two constituencies. The outcome must have been shocking and sent  the hustler team back to drawing board.

The DP has been the face of resistance to the BBI, severing his relationship with the President. His decision to align himself with the newly formed UDA was a demonstration of guts and steel will to chart his  path to the presidency in 2022. In this quest, he has mobilised grassroots support for his hustler nation vision.

He has crisscrossed the country courting regional political leaders. A number of MPs from Mt Kenya revolted against the regional kingpin and President. Ruto’s foothold at the Coast was visible and paid dividends during the Msambweni by-election.

In Kisii and Kuria regions, ODM was facing a serious onslaught from his brigade. Two Kisii MPs had to violently demonstrate loyalty to their leaders through kickboxing at a funeral. In Western Kenya, it appeared like the trio of ODM’s Wycliffe Oparanya, ANC’s Musalia Mudavadi and Ford-K's Moses Wetang'ula had been reduced to catch-up games to the hyper UDA battalion.

Ruto's Rift Valley bastion was clearly in his hands and he appeared to be on a roller coaster to State House. In light of thi, the outcome of the BBI county assembly endorsements and the recent by-elections was quite upsetting.

It was taken for granted that assemblies in the Rift Valley would reject the BBi Bill because the DP had made it clear that the initiative was a waste of public resources meant only to benefit a few leaders.

Only three counties chose to stand with him.

The Baringo’s rejection — a surprise and shocker — was useful to Ruto because his regional nemesis, Gideon Moi, is the senator. Interestingly, Ruto’s home county of Uasin Gishu voted to abstain. He therefore lost six counties and only gained the solid loyalty of three in the region.

The disappointment in the DP’s point men in the Mt Kenya region following the passage of the Bill was visible. It took considerable time before the vocal MPs could muster courage to address any public gathering. Was Central Kenya living up to its  reputation of always sticking together on matters election?

President Uhuru Kenyatta had retreated to his backyard on eve of the BBI county assemblies debate. He rallied the grassroots leaders to support the BBI in meetings at the Sagan State Lodge.

By the close of business on what became Super Tuesday, Central Kenya had delivered Uhuru’s wishes and all but threw the DP under the bus.

Northeastern, which had Aden Duale as Ruto’s voice, honoured the departed BBI chairman Yusuf Haji by voting yes. Western, Ukambani, Coast and Nairobi also endorsed the amendments. All of a sudden, Ruto's magic wand of being the champion of the have-nots went up in smoke. The defeats were resounding and definitive.

However, when they summoned up the courage to come out into the  open, the hustler chiefs tried to spin a narrative of bribery. The Sh2 million car grant to the MCAs was cited as political inducement to rally support for the BBI. They trained their eyes on the impending by-elections.

Every pundit averred that UDA would take the two constituencies and a host of wards. Given his energy in campaign activities, it was expected that Ruto would garner enough votes for his preferred candidates as he did in the Msambweni by-election. When the dust settled, UDA only had one MCA to its credit.

The demographic profile of London ward in Nakuru is credited to have handed UDA the seat. Analysts quickly passed judgement that the outcomes were a loss and defeat to the DP. Whether that is the truth is still a matter of debate.

However, it is agreed the defeat of UDA candidates in Matungu and Kabuchai constituencies, and Hells Gate and Huruma wards clinically dealt a political blow to the DP. While his hustler narrative appears to have been appealing to the masses in his roadside shows, at the ballot vindu vilichenjanga.

His image as being invincible and battle-hardened is dented. His prowess as a strategist and mobiliser is in dispute. He must reorganise himself and his troops.

This may require that he repositions himself within the impending referendum framework. Either he swallows his pride, joins the support cast and partners with Uhuru in leading the campaigns or he clearly declares himself the champion of the NO vote.

This would help him regain his stature among the top three political players. Otherwise he risks sinking lower than the 'sacred alliance; principals.

They say the Kabuchai by-election is a good opportunity to send Wetang'ula into political oblivion
Counties
6 months ago
by OCHIENG' KANYADUDI Political and Public Policy Analyst
Siasa
20 March 2021 - 05:00