• The 2017 highly polarised and disputed polls demonstrated how elections, which are  meant to promote stability and facilitate the peaceful transfer of power, can become divisive

• Electoral reforms in the lead-up to the 2022 General Election must thus be aimed at reinforcing credibility with a view to ensuring the full benefits of democracy. 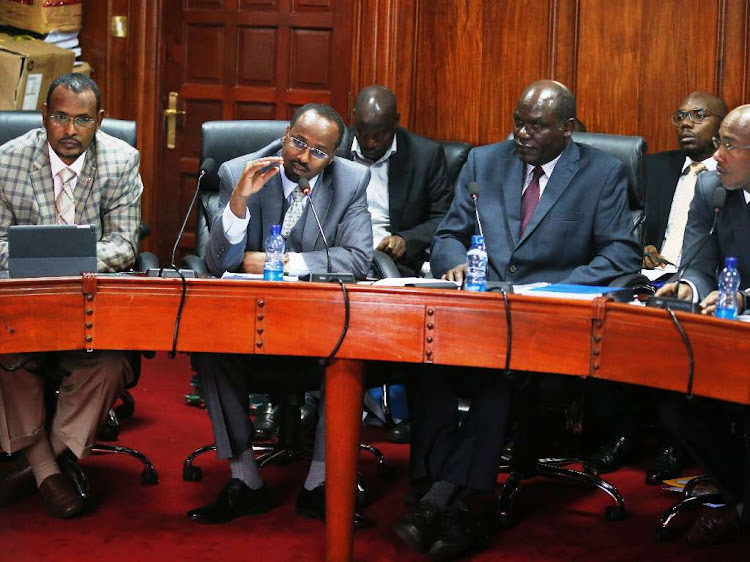 IEBC commissioners (from L) Abdi Guliye, Boaya Molu, Chairman Wafula Chebukati and Acting CEO Marjan Hussein when they appeared before the PAC to respond to the audit queries on November 27, 2018.
Image: JACK OWUOR

The High Court and the Court of Appeal in 2017 ruled that polling station election results are final.

The declaration form containing those results is the primary document, and other subsequent forms are only tallies of the original and final result at the polling station. This includes presidential election results.

The courts further gave a detailed historical background on why the Constitution has devolved elections to the polling station with finality. They also declared that the IEBC chairperson is not the commission and that presiding and returning officers have powers to announce results at the polling station and constituency tallying centres with finality — once verified and certified by the parties.

The net consequence of this constitutional provision and the ruling is that media and public have direct access to election results in real time from each polling station and constituency tallying centre.

Electoral reforms in the lead-up to the 2022 General Election must thus be aimed at reinforcing credibility with a view to ensuring the full benefits of democracy.

The 2017 highly polarised and disputed polls demonstrated how election, which is meant to promote stability and facilitate the peaceful transfer of power, can become divisive if not handled professionally, transparently and with integrity.

One key lesson Kenya is learning is that elections alone are not enough [to ensure democracy], even if all technical and organisational procedures are respected. This is because democracy is not just about legality. The rule of law is for a peaceful society; it is about legitimacy.

Elections must offer genuine choice. The challenge facing a nascent democracy like Kenya's is to ensure elections are couched in a democratic spirit, and backed up by strong institutions that can ensure and sustain electoral integrity.

A number of structural problems need to be addressed to prevent future elections from being divisive, problematic and dangerous. Prior to the 2017 polls, electoral reform was undertaken extremely close to Election Day. This resulted in a compressed time frame that put extremely high operational pressure on the IEBC.

This led to electoral forensics showing serious fraud with even scrapped or cleaned-up data. It further enhanced state capture that has systematically eroded democratic gains. This makes it difficult to fully implement reforms.

While significant progress has been made to ensure political stability through enactment of the Constitution and the establishment of independent constitutional institutions, more needs to be done.

The IEBC’s independence and accountability should be strengthened through greater financial autonomy. Appointment of future chairpersons and commissioners should be through a merit-based, multi-stakeholder selection committee.

The quorum for the commissioners’ meetings and the decision-making majority should be increased to promote institutional cohesiveness and consistency. Plenary meeting decisions should be available to the public.

IEBC should be reformed to restore public confidence, credibility and integrity. The problem is not the Constitution but how the IEBC Act and recruitment of the personnel are designed as it allows gross political interference.

There is need to retain an electoral agency in line with Article 88 of the Constitution. The IEBC must be fully transformed to guarantee structural, operational and funding autonomy.

There is need for a lean and professional IEBC that can withstand the test of time. It must be an institution that creates a situation of predictability and certainty with the electoral cycle. The current IEBC is  weak (Constitutive Act problem) and vulnerable to interference and manipulation.

Commissioners should only handle the function of oversight and policy and the Secretariat strengthened and devolved to the constituency for proper management of elections.

Parliament needs to undertake electoral legal reform well in advance of the 2022 General Election, and in accordance with Article 108 of the Constitution, enact a law to provide that the runners-up in the presidential election are automatically nominated to lead and speak on behalf of the party in the House. The running mate should be nominated to join the Senate.

Their duties and responsibilities must be well defined in the law. This will ensure inclusion and participation of all parties and their supporters in policy and legislative processes.

There is also the need to promote internal party democracy in regards to nominations and representation of marginalised groups.

The Office of the Registrar of Political Parties should be required to publicly report on parties’ compliance with gender parity and on the application of penalties. In addition, establish requirements for parties to increase the proportion of persons with disabilities in leadership positions and candidates, and to publicly report on this.

Parliament should operationalise the Election Campaign Financing Act to regulate the amount of money received and spent by candidates and parties during an election or referendum. It should also strengthen oversight mechanisms for party financing to include more specific monitoring requirements by the Registrar of parties’ income and expenditure, including during campaigns. Also strengthen the ban on the use of  public resources in campaigns.

The names of dead voters should be removed from the register and this calls for integrated systems involving agencies dealing with population databases.

We need legal requirements for a comprehensive results transmission framework, to include prompt publication of disaggregated results at polling station result forms for all elections, as well as clear provisions for electronic and manual results transmission.

Further, the media should be allowed to announce and publish confirmed real time results at the polling station as part of enhancing election transparency.

Strengthen the mechanism for enforcement of candidates' integrity and eligibility. No lawbreaker should be allowed to become lawmaker. All candidates must file their tax returns, wealth and property declaration, financial probity and background record checks.

Establish shorter timelines for prosecutions of electoral offences, with requirements for regular updates by the DPP and other agencies involved. Similarly, in regard to cases of threats to or violence against journalists and others involved in the election process.

Parliament should promptly review the electoral system and its impact on the political participation of women and inclusivity in a broader sense for compliance with the two-thirds gender principle.

They say IEBC remains in crisis almost two years after resignations of its commissioners.
News
1 year ago

Reforming the electoral agency has always been a thorny issue in every election.
News
1 year ago