We need honest and patriotic debate on the handshake report

BBI unfortunately rejected a parliamentary system, preferring a more powerful president — the cause of violence in every general election.

• During the National Convention next year we should all be able to agree on the constitution that will serve us well into the future.

• Such a discussion may necessitate that we are all ready to make difficult decisions at difficult times. That, for me, is the hallmark of good and visionary leadership. 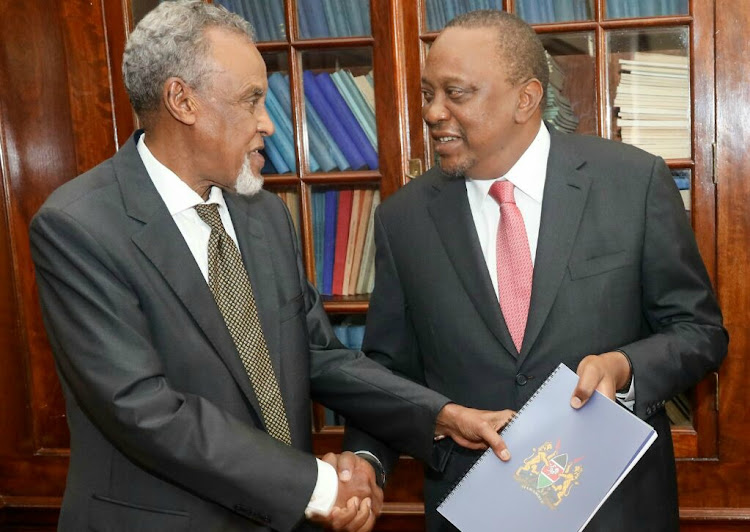 On Monday this week, just two days before the BBI report was launched with fanfare at the Bomas of Kenya by President Uhuru Kenyatta, Prime Minister Raila Odinga and Deputy President William Ruto, Prof Yash Pal Ghai wrote a very candid column in a local paper headlined “I support introduction of the PM office.”

In this article, Yash also pointed out that he had supported devolution based on 18 units, which “was taken away by Kibaki and his allies and they instead introduced a devolution system with 47  counties.”

The reason why Yash — and the Bomas of Kenya draft —favoured 18 rather than 47 units of devolution were many. But key among these was what Yash now describes in this article as “the need to bring together rather than divide Kenyans into tribes at the county unit of the devolved system of government.”

While the reason for creating the 18 regional units of devolution is very clear in this article, the BBI report has still maintained the 47 counties for perhaps some very good reasons as well, which will be put to public scrutiny as we debate the report.

Yash also went further to explain that the type of prime minister he was advocating was like the one found in Britain. Here the PM is the leader of the majority party or coalition of parties, and he is elected to Parliament like any other MP.

In his capacity as PM, he is expected to lead his troops in the House of Commons, answer questions from members, explain government policies and be an effective head of the Executive. This creates greater latitude for transparency and accountability of the Executive to Parliament when compared to the Presidential system.

The PM is the one responsible for appointing his ministers after he himself has been ceremonially appointed to that position by the Queen, or the President in our case. In the case of a hybrid system, the PM may be faced with a deficit in authority over ministers in Parliament where all of them are appointees of the CEO —the president.

This British system, replicated in India, Canada, New Zealand and several Commonwealth countries, with some variations, is what is called the pure parliamentary system.

Its other major difference with the presidential democracies of all shades and descriptions is that the PM is NOT directly elected by the electorate as a whole. While the President derives his or her mandate directly from the electorate, the PM’s mandate is from his party as a majority party in Parliament, or as part of a coalition of parties.

The Executive and the legislature come together in Parliament in a parliamentary democracy while the two are separated in a presidential democracy. The PM answers questions put to him by the MPs on behalf of the government which he leads. His ministers are likewise subjected to similar interrogation.

US President Donald Trump, for example, has been known to threaten Congress, saying that his direct mandate from the people is a clear sign that he has more power than Congress, notwithstanding what the US Constitution says.

The system that the BBI has proposed has put aside the parliamentary system as we have described above in preference for a presidential system where the president is directly elected by the people in the same way as MPs. The president then appoints a prime minister as leader of the majority party or coalition of parties in Parliament. All executive powers rest in the president whose Cabinet will be a mixture of MPs and non-MPs. The prime minister in effect represents the president in Parliament in an ideal situation. Our neighbour Uganda currently enjoys such a system under the National Resistance regime of President Yoweri Museveni.

It has been argued that this 'hybrid system' is in line with the desires of Kenyans 'who want to elect their own president directly.' When I gave my submission to the BBI in Kisumu I was definitely not one of those Kenyans. Like Yash Ghai, I rooted for a parliamentary system just as much as I did in my book, Parliamentary or Presidential Democracy: Choices to be Made, published in September this year. My major reason was that presidential elections have been the cause of our problems every five years, for reasons that the BBI report itself acknowledges.

These conflicts have been detrimental to our national cohesion, development and international standing in the community of nations. But I had nine other important reasons why the parliamentary system is more suitable to highly plural societies like ours. These will no doubt come up during the convention.

It could as well be the case that while the BBI report itself identifies presidential elections as the source of our conflicts every five years, the exigencies of politics and elite interests could have driven the BBI to still recommend a 'hybrid' presidential system as a compromise.

But it may prove an expensive compromise since its sincere implementation devoid of violence every five years may depend entirely on the subjective will and commitment of contestants who will avoid inflammatory campaigns as well as on who becomes our next president and prime minister.

Let us all now remember what President Julius Nyerere once told Tanzanians when he was trying to persuade them to adopt multiparty politics and undertake constitutional reform. Nyerere said the following, “The current constitution of the United Republic of Tanzania gives me so much powers that were I to exercise them all I would be the worst dictator in Africa.”

But how many such Nyareres are possible in Africa today? Can we trust the husbandry of our political system to the subjective will of humans or should democratic governance be inbuilt in the rules of the game of governance as well as the imperatives of the political system itself?

One more quote, this time from Donald Trump.“I can shoot someone on Pennsylvania Avenue and my supporters in their millions will still support me.”

As President Uhuru Kenyatta and former Prime Minister Raila Odinga urged Kenyans, let us discuss the report honestly and openly. During the National Convention next year we should all be able to agree on the constitution that will serve us well into the future. Such a discussion may necessitate that we are all ready to make difficult decisions at difficult times. That, for me, is the hallmark of good and visionary leadership in building our nation for the future and not simply to satisfy the exigencies of current politics.

The President and former Prime Minister already blazed the trail in March last year by putting aside their individual ambitions and prejudices while putting the nation first with the Handshake. Let us now follow with honest and patriotic debate on the report to safeguard the future of our nation.

Let us read BBI report, accept it for the country’s good

Kenyans want to get rid of corruption, negative ethnicity, politics of convenience.
Opinion
3 years ago

For the first time in our history, we have leaders who are living by our national motto Harambee.
Siasa
3 years ago
Post a comment
WATCH: The latest videos from the Star
by ANYANG' NYONG'O Kisumu Governor
Siasa
30 November 2019 - 05:00
Read The E-Paper