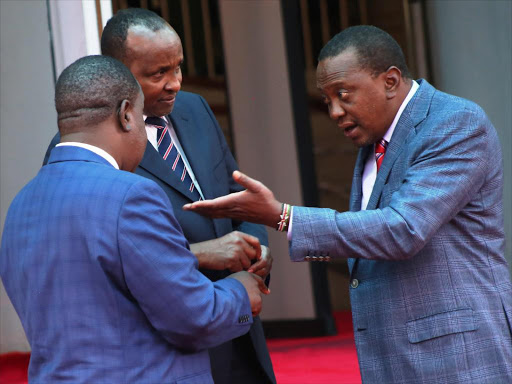 Through Executive Order No 1 of 2019, President Uhuru Kenyatta

has effectively established a senior Cabinet office above the rest.

The President’s order has landmark ramifications on the structure and character for the governance system, variously mentioned in the proposed referendum.

As currently constituted, the government has been oscillating between the American presidential system and British parliamentary system as occasions may dictate. The 2010 Constitution has been blamed for the confusion caused in governance structure. Pundits claim that it established a system of administration that is not consistent with the historical heritage of the nation. The American presidential system of governance that we borrowed is not accommodative of the country’s ethnic configuration.

It has been variously argued that it promotes the winner-take-all mentality and abhors inclusivity. The elections have therefore become a zero sum game and the ensuing competition is a matter of life and death. It is in light of this background that Uhuru’s acts are seen as attempts to provide a glimpse into his vision for the restructured governance system.

He has established a reputation of a workaholic and his omnipresence projected him as the image of the presidency. His instructions are normally implemented without fault and always promptly. He has managed to escape

the pervasive culture of corruption within the ranks of government. His ministry is in charge of many lucrative deals and tenders, always undertaken under the veil of government security protection.

He has not been fingered in any impropriety while in this sensitive docket. Matiang’i had shown this streak of hands-on hard work and powerful mien long before from his days in the Information and Communication Technology through to Education dockets.

He always made his work involve many more departments and, therefore, ensured his responsibilities were and still are multi sectoral and inter-ministerial. While at ICT, he came up with programmes that made him coordinate government officials from other ministries as well. At the Ministry of Education, he roped in the Interior docket to help him manage the many fire incidents. When he brought in the tough-talking Prof George Magoha to help restore the credibility of national examinations, he was now in charge of the police as well. The two portfolios gave him incomparable visibility and chance to demonstrate his capabilities.

Uhuru has determined to build his legacy around the Big Four agenda and the Building Bridges Initiative. The implementation of these ambitious projects requires a pair of safe and clean hands that can be trusted to inspire confidence among civil servants and earn respect of the political leaders.

Matiangi had placed himself on such a pedestal that the President could not overlook him at such a moment. This is his greatest moment in his long and illustrious career.

However, as indicated earlier above, this action has the effect of managing the impending referendum. If it is granted that the most problematic aspect of the country’s governance system is the structure of the Executive, then Uhuru has indicated the direction to take.

Currently, the presidency performs the functions of the State and the Executive. The confusion arising therefrom has been responsible for the missing link of statehood.

The Kenyan State was established as a colony by bringing together many and various ethnic nations. The efforts at building a united nation since Independence have suffered many setbacks due to internal cleavages and external geopolitical interests. The laws establishing the country’s governance system have taken into serious consideration these internal and external factors.

Therefore, the structure of government has always been seen to favour some segments of the country, while discriminating the others. This is what led to the popular mantra of ‘it is our turn to eat, which is the main driving force at every election.

It is the pedestrian elucidation of ‘winner takes all’ in the zero sum game of Kenya’s politics. All executive power is vested in the presidency, which runs roughshod over the other institutions that should ostensibly provide oversight.

Parliament and the Judiciary find themselves incapable of matching the overbearing powers and influence of the presidency because it combines the State and Executive, rendering the other arms pliant.

This is the anomaly Uhuru is trying to cure within the limitations of the Constitution.

The Executive Order allows him to focus more on and perform state functions. On the other hand, he got an experienced government operative in Matiang’i with a political acumen to manage his agenda. If this works well, albeit for a constitutional interim, then Kenyans should entrench this at the coming referendum. The functions of the State must be separated from those of the Executive for an effective government. The President as head of state will be the symbol and promoter of national unity and arbiter of competitive partisan interests among and within the three arms of government.

And with the strong regional coordination of national development and support of the county governments, President Uhuru Kenyatta will determine the direction of the referendum and his legacy.