Fight with the HR amid bad Monday hangover

There is only so much pettiness one can take before snapping 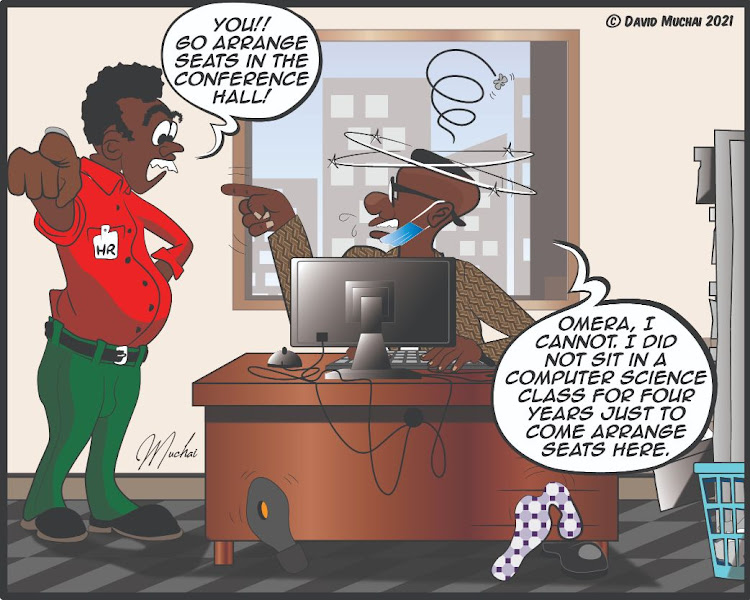 As a man, there will always come a time in your life when you will have to stand up to another man and tell him point-blank he is full of sh*t. Or in a less celestial language, he is a halfwit douchebag with limited cerebral capabilities. A d*ck. And then you will feel very good about it. It will be like you have transcended into a higher existence; strong, sophisticated, infinite.

I think that moment knocked on my doors sooner than I had expected. I often thought it would come when I am rich enough to parade my baby mama scandals on Facebook and still get invites to church harambees as the guest of honour. I thought it would come when am able to throw into a conversation statements like, “I had a long phone call with Jeff Bezos last night...” or “Vila Kempinski serves such unrefined cuisine.” Or, “My latest TX is such a bitch.”

Only when these moments are passed, I imagined, would I locate that one man I have always wanted to stand up to and tell how much of a sh*t bag I think he is — my high school biology teacher.

That son of a gun despised me so much just because I did not fancy going into medical school. God, I loathed biology. And I despised him, too, for forcing me to cram the names of grotesque-looking human bones, when all I wanted to do was reply to the letter my Asumbi girlfriend sent me.

I did not know sh*t in biology. The first time I put up my hand in a biology class, he giggled and said, “Class, if Ogwa knows the answer then this is not a question worth asking.” So I thought if one day my balls grow big enough to really insult another man, hands down it would be him first.

Only that has not been so.

I went for my industrial attachment and met Dibox, the HR assistant. Of course, Dibox is not his real name, but everyone calls him that behind his back. His favourite quote is, “For excellence to be attained, you must work with honour.” Yeah, no one said that. He quotes himself, pompous prick! If only he did more actual work than strapping up and down the office, being an ass.

Now Dibox has had it in for me since day one. I know this because by the end of my first week, he had already made a smug comment on my cool sneakers, saying I dressed like a keg-addicted campus-never-graduating-goon. I did not call him a sh*tbag then; I smiled and said I looked that way because that is what I am, a goon – except for the never-graduating part. I am sure I will graduate. I don’t know when, but I will.

Since then, he has been on my case. Judging me, rebuking me, demeaning me and generally making me feel like sh*t, which is what he actually is. But I would just take it like the coward I have always been.

There is just something about vertically challenged men. An incessant need to compensate with posturing and ridiculous grandiose the few kilometres they are missing on top of their heads. I’m not saying this five-foot-nothing HR assistant is short; I am saying he is not tall enough to stay above pettiness. And I had just stomached his sh*t up to here (you can see my hand, right?).

Yester morning was one of those mornings for me. Crappy mornings, which if I have to waste words telling you crappy mornings are always Monday mornings, then clearly you are not supposed to be reading this. I woke up with a rock-splintering headache. My fingers and toes felt numb. And my insides were coiling and protesting violently. Which is my way of saying I had the worst form of a hangover. A result of the KC bottle Tom, a colleague, had bought the previous evening, and whose contents I had swallowed like it was my solemn duty to do so.

Feeling crappy, I still had to drag myself to work and not for of the rent — interns are not paid a dime here — but because this might just be the day those sadistic university assessors decide to make an impromptu visit, miss me and deny me the degree I have been working my ass for these four years past.

So I dragged my sore self to work. And sat behind my computer, logged into YouTube, typed, “Angry dogs turn against their masters” because nothing relaxes and entertains me more than watching a bunch of carnivorous monsters that live better than I do, turn against their white imbecilic owners.

But halfway through the first video of a huge Alsatian dog tearing through what must be a hundred thousand dollar couch, Dibox walked in. No good mornings, no nothings, he went straight ahead to ordering me to go clean and arrange seats at the conference room. Maan, I lost it. I snapped, and I told him things. Things I would not want to write here because the Internet does not forget, and someday I would want to forget. Anyway, I cleaned no room, arranged no seat, and lifted no finger, only my voice.

I think I am going to be fired tomorrow. Wait, can an intern be fired? Should I get a lawyer to sue for unlawful dismissal if I get fired? I want Miguna Miguna to come represent me.

Whether Miguna will be allowed to enter is another issue.
News
2 months ago

Tension is: Telling dad you don’t want a career in what you studied for