Some support curfew extension while others say it is not necessary

• The government believes it is winning the war on banditry, but residents have expressed mixed feelings about the measures put in place to restore peace.

• On Monday, the government showcased its round one success in the operation, displaying 200 illegal guns and 3,000 ammunition recovered from villages. 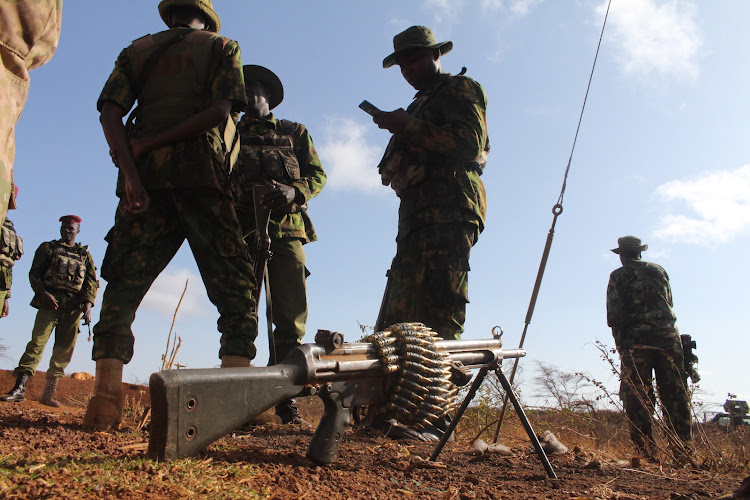 Police officers involved in Operation Rejesha Amani Marsabit at a camp on the outskirts of Marsabit town on June 6, 2022
Image: ANDREW KASUKU

A mixture of optimism, uncertainty and relative peace hangs in the air in Marsabit after security forces were deployed to the area to end clashes and conflicts.

A month after launching Operation Rejesha Amani Marsabit, the government believes it is winning the war on banditry, but residents have expressed mixed feelings about the measures put in place to restore peace.

On Monday, the government showcased its round one success in the operation, displaying 200 illegal guns and 3,000 ammunition recovered from villages.

“For the last one month, we have been here and frankly we’ve not had any worrisome incidents of security in this place. Wananchi are happy with the operation and the curfew,” Interior CS Fred Matiangi told journalists.

But Matiang’i's visit showed the journey before triumph is still long. He went into the town under tight security involving special forces, a tactical armoured vehicle and a technical vehicle, popular with military operations.

His visit to assess the operation involved just one field visit at an RDU camp on the outskirts of Marsabit town where he met commanders and some officers involved in the operation.

“We are doing well but we need an additional vehicle,” one officer told the CS at the camp.

In the town, he met women who have been displaced by the clashes.

He also met with administration officials and religious leaders before taking a stroll around the town centre.

Fatuma Hassan was among dozens of women who aired their grievances to the CS.

“I lost relatives and property during a raid by bandits last year and now I have nowhere to stay. We need peace,” she told the Star.

Galgalo Boru, who was shot in Saku and now walks with the help of crutches, waited unsuccessfully outside the meeting hall to talk to the CS.

“They told me he is only meeting women and I can’t see him,” he said. Boru was holding a hospital envelope in one hand.

Another woman who was displaced said residents need lasting peace as the presence of security forces "isn’t a necessary sight".

Asked by the CS what he thought of the curfew extension, one man said extending it was not necessary.

Others shouted "iendelee" meaning the curfew extension is welcome. 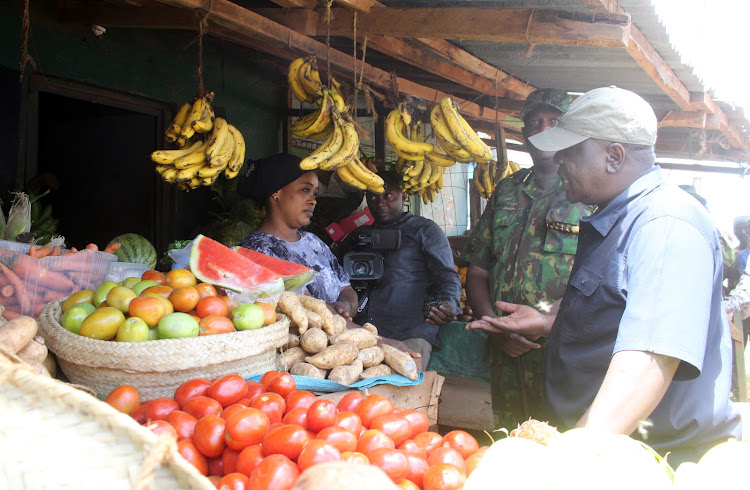 Interior CS Fred Matiang'i interacts with a businesswoman when he assessed the progress of Operation Rejesha Amani Marsabit in Marsabit town on June 6, 2022
Image: ANDREW KASUKU

On the outskirts of the town, houses allegedly burned in attacks by rival communities can still be seen.

Matiang'i assured the government was interrogating suspects involved in the bloodletting conflict with a view of arrests.

There are two main check points - one at Archers Post and near Marsabit town. Vehicles are stopped and searched. Occupants have to produce identity cards.

Currently, the town is a hive of activity as supporters of various aspirants and parties criss-cross the streets in loudspeakers.

Matiang’i said poor coordination among security teams, infiltration of bad politics and porous borders are the major drivers of conflicts in the area.

“With the numbers [of police] that we have on the ground and with the people who are posted here, we can have such security problem…there is no reason why a county that is so endowed should have such small problems that are now inhibiting economic grown and development,” he said.

Marsabit is on its second month of curfew, to help pave way for smooth operations for the team.
News
7 months ago

He is expected to inspect ongoing curfew operation.
News
8 months ago