DP revealed grand scheme perpetrated by a shadowy system to degrade his credibility.

• The fact the William Ruto is Deputy President of Kenya does not disrobe him of his fundamental freedoms enshrined in our Constitution.

• By taking a critical view of the manner in which DCI was prosecuting its mandate in the Kenei investigation, the DP is well within his right. 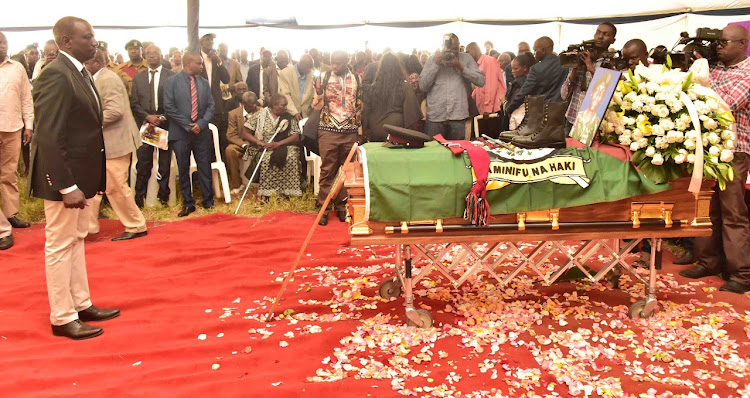 The inappropriate access of Harambee House Annex by former Cabinet Secretary Rashid Echesa and shadowy foreign and Kenyan nationals allegedly involved in a fake arms deal and the tragic death of AP Sergeant Kipyegon Kenei have dominated public conversations in the country over the last two weeks.

Kenei was a security officer in the building housing the office of the Deputy President.

Against the backdrop of intense efforts by the media and Department of Criminal Investigation to link the deputy president William Ruto with this unfortunate incident, the DP made pertinent clarifications.

He asserted not only his complete non-involvement in the death, but submitted that the entire episode was part of a grand scheme hatched and perpetrated by a shadowy system to degrade his political credibility and if possible terminate his political career.

The DP’s apportionment of blame on “the system” has attracted diverse opinions.

Critics have argued that as the second most senior political leader in the country, it was not open for the DP, who is considered part of the system, to publicly voice such criticism.

This article argues that the critics are misadvised in their view in at least two ways.

First, the fact the William Ruto is Deputy President of Kenya does not disrobe him of his fundamental freedoms enshrined in our Constitution.

The holding of a public position and enjoyment of high governmental status cannot be conditioned on the waiver or relinquishment of constitutional rights absent a compelling public interest that justifies the subordination of those rights.

The freedom of speech is such a central tenet of a democratic society that US Supreme Court Justice Benjamin Cardozo more than 80 years ago called it “the matrix, the indispensable condition of nearly every other form of freedom.”

By taking a critical view of the manner in which DCI was prosecuting its mandate in the Kenei investigation, the DP is well within his right.

To remain silent in the face of an aggressive campaign of vilification and distortion of facts neither aids in truth seeking nor serves any compelling public purpose.

Secondly, critics suggest that as Kenya’s deputy president, William Ruto is part and parcel of the system, the very cog allegedly responsible for mobilizing various efforts to discredit and degrade his office.

This is a very narrow view of the system.

In general parlance, the system or the establishment is not just about "centres of official power" but refers rather to a range of powerful players and institutions within public and private sectors with an agenda to maintain the status quo in the service of their private interest.

The system is highly context dependent but in Kenya, one can clearly see how the cohabitation between private business and some state entities have blurred the public-private divide.

The mainstream media for instance is a sector which appears linked to a campaign of disinformation perpetrated by some individual state officials against Ruto with a view to constructing a portraiture of a vindictive, disrespectful, disloyal and corrupt individual.

In pursuing this agenda it is not uncommon for sections of the media to be fed on scraps of information and half-truths from state entities to embellish and sustain the narrative.

So disruptive to democratic governance can “the system” be that the 2010 constitution for instance recommended the need to restructure “the system” of administration commonly known as the provincial administration to accord with and respect the system of devolved government.

Here, the constitution saw the provincial administration, a colonial infrastructure of state officials and informers spread across the country all the way to the village level, as a system the existence of which ran counter to the aspirations of devolved governance.

In calling for its abolishment and restructuring, the constitution appreciated the mortal dangers posed by such system to notions of openness, subsidiarity, cooperative governance and civic participation embodied by devolution.

To call out the damaging conspiracy of the establishment on peaceful coexistence and institutional integrity is right and responsible thing to do.

In the new world in which we live, the hungry, driven children of meritocracy can surpass the scions of wealthy families and defeat the establishment.

This is especially so now, given the capacity of technology in flattening political participation, allowing "grass-roots" candidates rather than corporate endorsed actors to reach out to and mobilize big networks of supporters.

Korir Sing’Oei is the Legal Advisor, Deputy President’s Office (his views are personal)