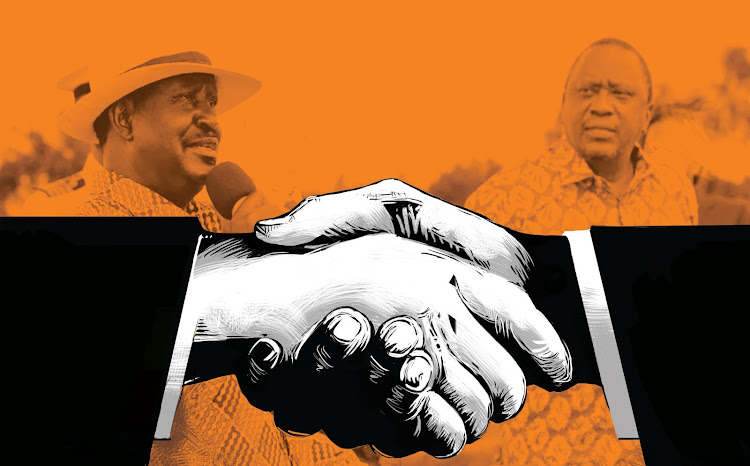 Once upon a time, a very large Oak was uprooted by the wind and thrown across a stream. It fell among some Reeds, which it thus addressed: “I wonder how you, who are so light and weak, are not entirely crushed by these strong winds.” They replied, “You fight and contend with the wind, and consequently you are destroyed; while we on the contrary bend before the least breath of air, and therefore remain unbroken, and escape.”

Last Wednesday, President Uhuru Kenyatta made a visit to his longtime brother, ODM leader Raila Odinga who had been ailing after he contracted Covid-19. There have been all manner of innuendo and speculation about their friendship and partnership, with some claiming the handshake was broken.

On Thursday, Uhuru and Raila made a tour of various projects in Nairobi that are aimed at ensuring residents lead better lives. And this has been the case since the handshake in 2018 as we have witnessed in the past.

While some see it as a political game, a keen eye can tell that this partnership between Raila and Uhuru has been of benefit to the country. It also has a lesson for all Kenyan politicians who would want to use their election wins to alienate those that they were competing with.

Like the oak tree, political leaders must not think they are too strong and more grounded than others. In fact, we have witnessed that being flexible and accommodating provides the recipe for long-term success.

Though the handshake was as a result of chaos that followed the 2017 elections, it has helped the country move ahead with its development agenda. Various projects that had taken years are being completed at every corner of the country thanks to the working partnership between Uhuru and Raila.

By increasing the number of top seats, which some claim is unnecessary, we increase cohesion and also ensure that we have as many people on the table to ensure that all ideas are considered and implemented.

In January, they visited Kisumu port where the Kenyan military is building a new shipyard as part of the ongoing rehabilitation and expansion of the important lake transport facility. When you look at it clearly, this would not have been possible if Raila was in the periphery opposing everything the government did as we witnessed in the first term of Uhuru’s presidency.

And herein lies a lesson for all Kenyan leaders. You can achieve a lot for Kenyans if you did not treat your political competitor as your enemy after an election. Elections come and go but the country we all live in lasts and is in the quest for development.

In the next election, all competitors should put this in mind and ensure that whoever they compete with is not treated as an enemy, whether they win or lose. For the winners, it will be important to invite everyone else to the table where ideas can be shared and support sought for collective development.

And this is what BBI is seeking to achieve by ensuring that we do away with the winner-take-all system that has been our undoing; where losers and their supporters feel alienated by the winners after every election.

By increasing the number of top seats, which some claim is unnecessary, we increase cohesion and also ensure that we have as many people on the table to ensure that all ideas are considered and implemented.

The handshake remains intact and its fruits are there for all to see. BBI is the greatest of these gifts and one that will ensure that the country has a better future beyond Uhuru and Raila.

Now that there is no doubt that Uhuru and Raila are equally committed to the handshake, Parliament must expedite the BBI process and allow Kenyans to vote for the changes in a referendum.

Politicians must all learn from Uhuru and Raila on how to put the country first without only thinking of their selfish political interests. This will ensure that the country achieves development that meets the aspiration of all Kenyans.