There are genuine BBI critics and oppositionists

• Forget it, says Kithure, whatever you will bring as a referendum question in the nature of the BBI we shall reject with all our force.

• This is what I call "obstructionist politics" not befitting politics through dialogue that the BBI process has provided Kenyans for well over one year now. 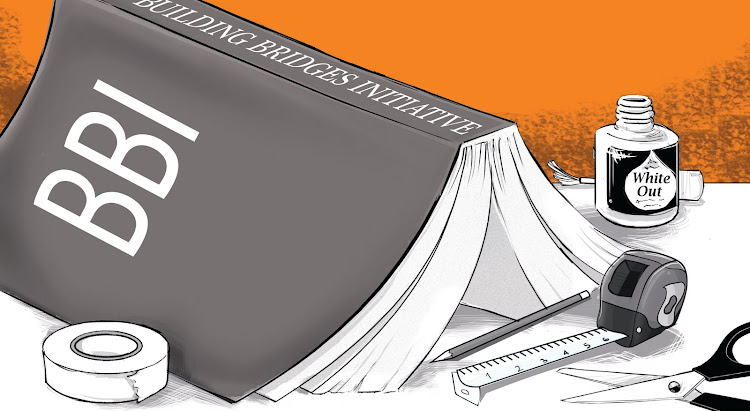 There are genuine BBI critics and oppositionists
Image: OZONE

Senator Mutula Kilonzo Junior's comments in the Star on Monday made a lot of sense.

What Senator Mutula called for is a sensible improvement on the BBI report by undertaking needed editing before it is framed as a referendum bill.

I don’t see how and why the two principals can turn down this idea. In any case, ODM leader Raila Odinga has already said publicly that such editorial work is already going on at the BBI secretariat as comments are received from the public.

What to me is most important is to distinguish between the school of thought represented by genuine critics like Senator Mutula and the other represented by the likes of Prof Kithure Kindiki, who prefer that the BBI report be consigned to the dustbin of hopeless proposals.

I completely reject this oppositionist gesture that is neither constructive nor realistic. Forget it, says Kithure, whatever you will bring as a referendum question in the nature of the BBI we shall reject with all our force.

This is what I call "obstructionist politics" not befitting politics through dialogue that the BBI process has provided Kenyans for well over one year now.

Let us go back to the origin of the BBI: The handshake. Few Kenyans would deny the fact that the handshake saved Kenya from political chaos and perhaps from several years of political instability and decay following the crisis of the 2017 presidential election.

The two principals decided to address the issue of inconclusive and conflict-ridden elections once and for all. In essence, it is political exclusion as a result of presidential polls based on the "winner-takes-all" principle, which has been the main cause of conflicts after general elections.

The 2010 Constitution needs to be changed so that a new principle of ensuring that presidential elections are open for inclusion at this top level of executive power. This proposal is made in the BBI. Demonising this proposal in terms of creating jobs for the boys is obstructionist, especially when, during the BBI consultations, such obstructionists never proposed any other realistic alternative.

BBI has proposed a few constitutional amendments and policymaking measures to address the nine issues of national concern towards "Building Bridges to a New Kenyan Narion".

These were ethnic antagonism and competition; lack of national ethos; inclusivity; devolution; divisive elections; safety and security; corruption; shared prosperity; responsibilities and rights. Are these issues sufficiently dealt with in the Steering Committee Report? What, if any, has been unattended to?

Some of the issues that stakeholders have pointed out as needing further attention can easily be addressed through legislative and policy measures which, in any case, are always in a continuous state of flux in vibrant democracies.

Room has already been created in the Constitution for this, and BBI has simply built on the opportunities it provides. If one pays careful attention to the architecture of the report of the Steering Committee on implementing the BBI the following features stand out clearly.

First there is the report itself with an introduction, a section on methodology, then the validation outcomes for each of the nine thematic issues mentioned earlier and finally the implementation mechanisms.

Second, the rest of the report are "annexes" that mainly dwell on steps to be taken to implement what the task force synthesised from the public hearings and consultations as further encapsulated in the report.

Thus, among the annexes are "Implementation instruments for recommended public policy measures." But there are people who are concerned with all kinds of issues that need public policy changes. These issues may not have been addressed in the BBI precisely because they may not have been as dire as the nine core issues that the BBI proponents identified.

Such issues could always be addressed in our public discourse at various levels of governance, now and in the future.

I strongly believe that the door is not shut on such issues, even if BBI may not have addressed them. The possibility is higher, however, now that the BBI has opened the door to such progressive changes to be addressed, even through similar methods in the future.