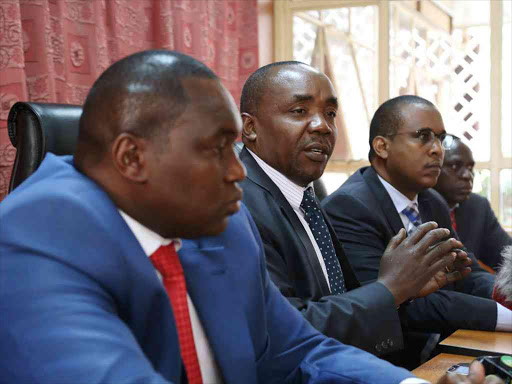 Maara MP Kareke Mbiuki,Kiambu MP Jude Njomo and Mbala Mbala Abdikadir Aden during a media briefing in Parliament where they commented on the Banking (Amendment) Bill that proposes to put a cap on the rate of interest charged on loans and to fix the minimum rate of interest.Photo/HEZRON NJOROGE

There is a history to this. The first MP to try and bring about the regulation of interest rates was Gem MP Joe Donde, back in the year 2000; then came my effort in 2011, when we mobilised and struggled over this, until the Finance Bill was delayed all the way to December.

In the end, we had to have a ‘kamukunji’ with the President, the Vice-President, and the Prime Minister, at which the executive argued against this Bill.

But the MPs were properly seized of this matter, and our position was clear: And we refused. In fact, I would say that we out-argued them on this issue.

So it then had to go back to the House. And once the issue was back to the House, unorthodox means were used, which in the end led to those of us who had worked to bring about interest rate regulation through this amendment in Parliament losing the vote.

My view then, which I still hold now, was that high interest rates undermine economic growth; they also reduce borrowing; and they are immoral. Ultimately, it is a major driver of the continued impoverishment of our people.

The lifeblood of any economy is the free flow of credit. And there is always a need to strike a balance between the profiteering intentions of the banking sector and the general good of the economy.

And you will find that in the developed countries the interest rate is always in single digits. Very low single digits at that. And the reason the banking sector always gives – and which the executive supports – is that they are mitigating against risk. That we in Kenya are very high-risk borrowers, being a third world economy.

But the question is this: If the interest rate is higher, then surely the default rate will also be higher? It is bound to be much higher than if you offer affordable interest rates.

Back then, Uhuru Kenyatta himself was Minister for Finance.

What I said then still applies now: I believe our economy would benefit immensely from the drop in interest rates, which would automatically follow once there is legislated regulation of interest rates.

Ogindo is a former MP for Rangwe.