Ukraine says it needs heavy weapons to take back territory from Russia. 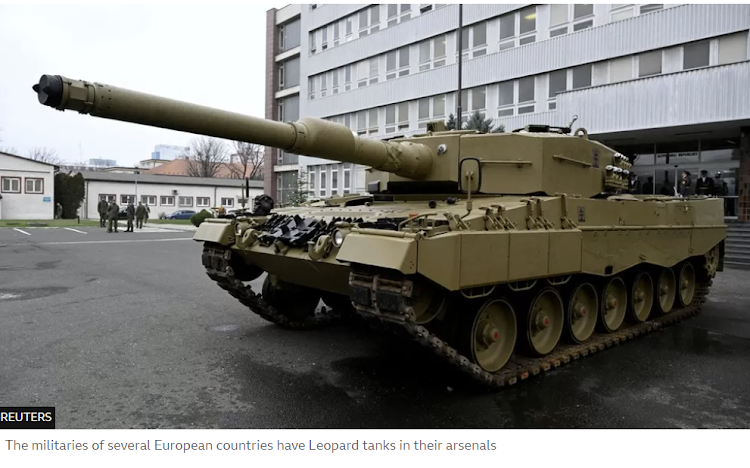 Ukraine has welcomed as a "first step" Germany's decision to send Leopard 2 tanks to aid in its fight against Russia's invasion.

Allies hailed the announcement as the "right decision", which came after weeks of reluctance in Berlin and international pressure.

Russia said the "extremely dangerous" move would escalate the conflict and that the tanks would "burn".

Ukraine says it needs heavy weapons to take back territory from Russia.

Germany's Chancellor Olaf Scholz urged Germans who are worried about the move to trust him, insisting that it was right to support Ukraine.

Addressing Berlin's previous hesitance to send tanks, the chancellor told MPs in the Bundestag that it was "right that we didn't just get swept up".

Mr Scholz said Germany would deliver 14 of the vehicles as a "first step", but that its goal was to assemble two battalions of them for Ukraine.

Germany also allowed other countries, including Poland, to pass on their Leopard 2 tanks to Ukraine's front line - which was restricted until now under export regulations.

Despite previous accusations of foot-dragging by Chancellor Scholz, Germany is in the top three single donors of military aid and one of the main providers of humanitarian aid to Ukraine.

US President Joe Biden's administration is also expected to announce plans on Wednesday to send at least 30 M1 Abrams tanks.

There had been speculation in the past weeks that the German chancellor's decision to send tanks was conditional on the US doing the same.

Russia's ambassador in Washington said the possible deliveries of battle tanks were "another blatant provocation".

The Kremlin said earlier on Wednesday that the Abrams battle tanks would "burn like all the rest", dismissing the proposed shipments as "just very expensive".

Ukraine's President Volodymyr Zelensky said he was "sincerely grateful" for the tanks Germany decided to send - calling the decision "important" and "timely".

He said the move was a "green light for partners to supply similar weapons."

While the acquisition of tanks from the West would be considered a diplomatic coup for President Zelensky, he said in his address on Tuesday night that his country will need even more tanks than has been promised so far.

He believes his country needs at least 300 battle tanks to defeat Russia.

Mr Morawiecki told the BBC on Tuesday that apart from sending Leopards, his government will soon be sending an additional 50-60 older, Soviet-era tanks to Ukraine.

Nato's secretary general said Germany's decision came at a "critical moment in Russia's war" and would "help Ukraine to defend itself, win and prevail as an independent nation".

"German tanks appearing [in Ukraine] will lead us to consider German territory, military bases and other sites as legitimate targets," he said.

Though Russia chose to invade Ukraine, the narrative constructed by the Kremlin frames the West as the aggressor, the BBC's Russia Editor Steve Rosenberg says.

Germany's decision to send tanks to Ukraine will be used to strengthen that narrative.