Italy has seen the largest number of coronavirus cases in Europe.

• Last week the government announced the closure of all schools and universities across the country for 10 days. 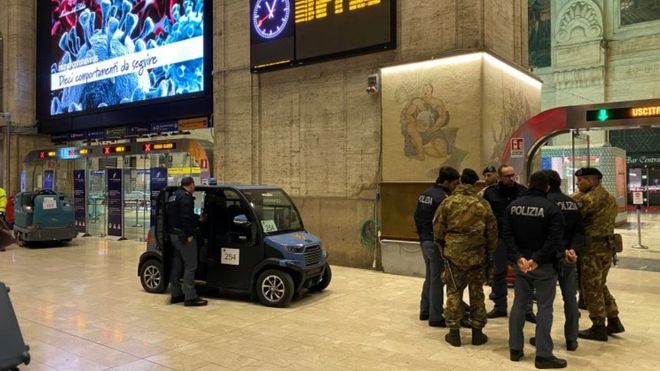 Military and police in Milan prepare to lock down the city.
Image: REUTERS

Italy has placed up to 16 million people under quarantine as it battles to contain the spread of coronavirus.

Anyone living in Lombardy and 14 other central and northern provinces will need special permission to travel. Milan and Venice are both affected.

Prime Minister Giuseppe Conte also announced the closure of schools, gyms, museums, nightclubs and other venues across the whole country.

The drastic measures will last until 3 April.

Italy has seen the largest number of coronavirus cases in Europe and reported a steep rise in infections on Saturday.

The strict new quarantine measures affect a quarter of the Italian population and centre on the part of the country that powers its economy.

The death toll in Italy has passed 230, with officials reporting more than 36 deaths in 24 hours. The number of confirmed cases jumped by more than 1,200 to 5,883 on Saturday.

"We want to guarantee the health of our citizens. We understand that these measures will impose sacrifices, sometimes small and sometimes very big," Mr Conte said early on Sunday.

"But this is a time where we must take responsibility for ourselves."

Last week the government announced the closure of all schools and universities across the country for 10 days.