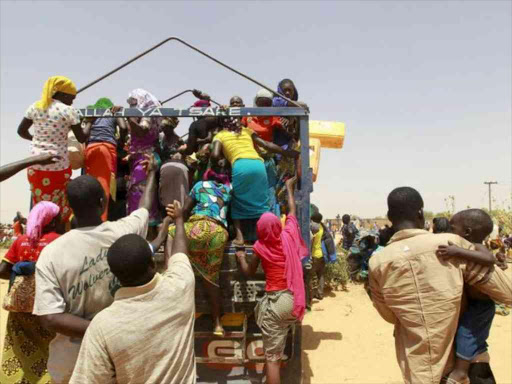 Nigerian returnees and people displaced by Boko Haram insurgence board a truck at Geidam after arriving in Nigeria, May 6, 2015. /REUTERS

Hundreds of thousands of people in northeastern Nigeria remain beyond the reach of aid, trapped between Boko Haram insurgents and counter-insurgency operations that have left many without food or work, Doctors Without Borders said.

Those who reach health centres report continuing violence against civilians by both sides in Borno state, said Bruno Jochum, general director of Medecins Sans Frontieres (MSF) Switzerland, upon return from the region.

"There are hundreds of thousands of people who are not accessible today for humanitarian assistance," he told Reuters.

"What we see is a civilian population who for a bit more than two years has been caught and trapped between, on the one hand, violent attacks by the Boko Haram movement and, the other hand, very strong counter-insurgency operations by the Nigerian armed forces," Jochum said.

Around 800,000 displaced people - mainly women, children and elderly - live near the state capital Maiduguri, about a quarter of them in camps, MSF says. The medical charity focuses on providing maternal and child health.

"Those that are accessible outside the regional capital often are regrouped in small towns, camps under the control of the Nigerian military, but they cannot move out or can hardly move ... and they are not able to plant. They are completely cut off from their livelihoods," Jochum said.

Boko Haram has killed around 15,000 people and forced more than two million from their homes during a seven-year insurgency.

Access has improved somewhat in Borno in the last six months after reports of people dying from malnutrition, Jochum said.

Nutrition and food distribution programmes have helped, but the situation remains "extremely fragile".

"There was a big focus on the food crisis last year and the need for a big pipeline of international aid to ensure the survival of the population.

"It's still absolutely needed for the coming year but it should not hide what is behind it, which is an enormous issue of safety and protection for populations within a conflict where there are political and military objectives which in the end have little regard for civilians."

An air strike by the Nigerian air force, which it said was accidental, on the town of Rann in January killed up to 150 people and wounded the same number, mainly people queuing for food vouchers, Jochum said. Three water and sanitation workers hired by MSF were among the dead.

"There are victims of this bombing who are going to need long-term help. You have people who have lost their physical integrity, who have been handicapped probably for life and you have children who lost their parents," he said.

"It does raise questions about the conduct of warfare and proportionality beyond an individual event."