• President Suluhu directed the Joint Permanent Commission (JPC) between the two countries to meet and come up with plans that can strengthen the Tanzania-Kenya relationship. 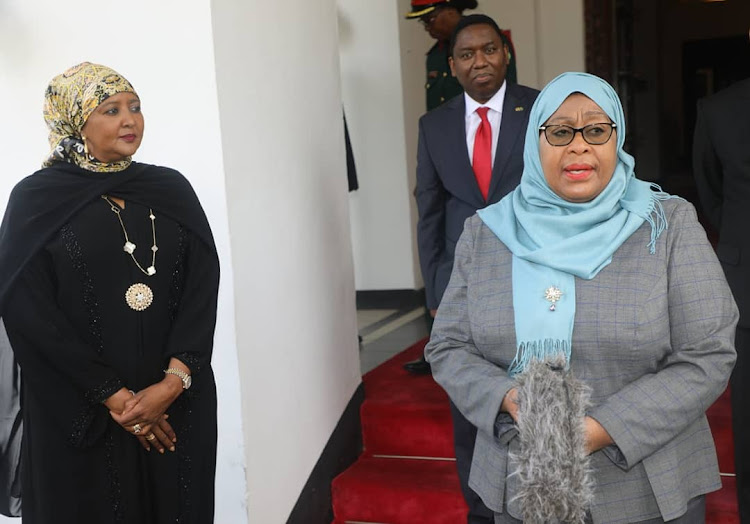 Tanzanian President Samia Suluhu has said that her administration is determined to solve some of the issues existing between Tanzania and its neighbouring country Kenya.

In a statement to the media on Sunday after meeting a special envoy from President Uhuru Kenyatta of Kenya, Suluhu said that she will pick from where her predecessor the late President John Magufuli left.

At the same time, Suluhu directed the Joint Permanent Commission (JPC) between the two countries to meet and come up with plans that can strengthen the relationship.

The commission met for the last time in 2016.

Uhuru’s message to his counterpart was delivered by the Sports CS Amb. Amina Muhamed.

In his message, Uhuru assured Suluhu that Kenya is ready for a bilateral talk that will strengthen the bond between them.

Uhuru has also invited Suluhu to make her first visit to Kenya as the president.

CS Amina and Kenyan Ambassador to Tanzania Dan Kazungu were received by President Suluhu at the State House in Dar es Salaam, Tanzania.

Suluhu was sworn in last month, becoming the first female president in Tanzania.

The 61-year-old leader promised Tanzanians that she will fit into Magufuli’s shoes and that there was no reason to worry.

She served as the Vice President during Magufuli’s first and second terms as president.

Suluhu had also promised to continue to implement the values that the CCM party has put in place.