Petitioners have 7 days after results declaration to file their petitions at the Supreme Court.

• The Supreme Court is mandated by Article 163 of the Constitution to hear and determine disputes relating to the election of the President.

• Under the guidelines, persons aggrieved by the results of the polls for whatever reason have seven days from the day of declaration of election results to file their petitions. 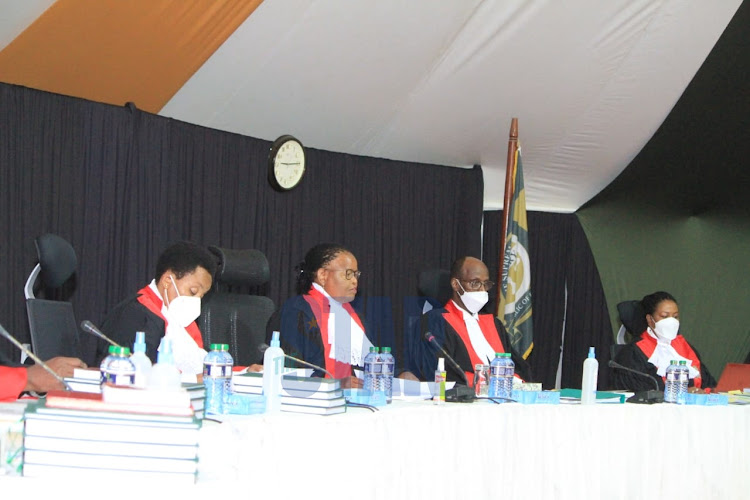 The Supreme Court on August 7 released timelines for filing and hearing presidential petitions that may arise from the general election.

Azimio luminaries led by running mate Martha Karua insinuated that they would petition the election outcome whose declaration was preceded by chaos at the Bomas of Kenya and a statement by four IEBC commissioners denouncing the results.

The commissioners led by vice chairperson Juliana Cherera claimed the final stage of verifying the presidential results was opaque.

The Oxford dictionary defines 'opaque' as something that is not transparent.

"We therefore cannot take ownership of this result that is going to be announced," Cherera said at a hastily assembled press conference at Serena Hotel, Nairobi.

She was accompanied by fellow commissioners Francis Wanderi, Irene Masit and Justus Nyangaya.

Karua said in a tweet shortly after the declaration that, "It's not over till it's over."

Should the Azimio team head to court, they have seven days to file their presidential petition.

The Supreme Court is mandated by Article 163 of the Constitution to hear and determine disputes relating to the election of the President.

Persons aggrieved by the outcome of a presidential election for whatever reason have seven days from the day results are declared to file their petitions.

The time frame is in line with Article 140(2) of the Constitution.

"This is a non-negotiable timeframe," Chief Justice Martha Koome said in a press statement on August 7, 2022.

According to the timelines, a petitioner will have 24 hours to serve the respondent with suit papers from the time of filling his or her petition.

Upon being served with the petition, the respondent will have four days within which to respond to the issues raised and to serve the petitioner with his replying affidavit.

At this point, parties seeking to be enjoined in the petition as amicus curie (friends of the court) will be allowed to file and serve their applications to the court, the petitioner and the respondent.

Eight days from the date of filing the presidential petition, judges of the apex court will hold the pre-trial conference in line with rule 14 of the Supreme Court Presidential Election Petitions, 2017.

Immediately after the pre-trial conference, the Supreme Court will start hearing the petition.

The hearing may go on for several days depending on the quantity of issues raised but 14 days after the presidential petition was filed, the court must render its verdict.

Kenya made history in 2017 when it became the first African country to nullify presidential election results.

This was after the court then led by Chief Justice David Maraga said there were irregularities during the transmission of election results.

Maraga was famously quoted saying an election is a process and not an event and as such, the way results are tabulated and transmitted must be verifiable.

The 2017 general elections were held August 8.

Incumbent President Uhuru Kenyatta and his running mate DP William Ruto were declared winners of the presidential contest with 54.17 per cent of the vote.

Their main rival Raila Odinga finished second with 44.94 per cent of the vote.

After the nullification of the results, the court ordered a repeat election within 60 days on October 26, 2017 which Uhuru easily won after Raila boycotted.

They have both pledged to concede defeat of they lose fairly.

Others in the race are George Wajackoyah of Roots Party and David Waihiga of Agano Party.

He also advised the public, advocates and litigants to keep the stipulated time.
News
3 months ago