• Raila’s team met delegates from all communities in Kibra daily in the last 10 days at Jaramogi Oginga Odinga Foundation at Upper Hill. 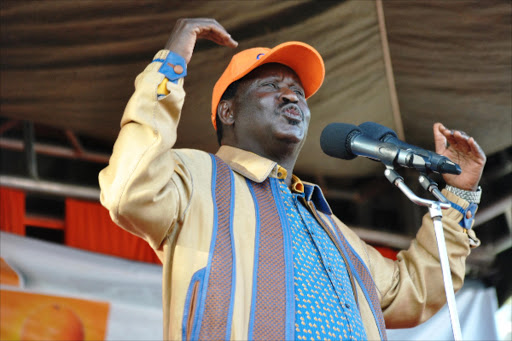 For every delegation that Ruto hosted in Karen, Raila had 50 people in it. They recorded all the speeches, collected cash and some even sat in Ruto’s strategy meetings only to transmit the entire information to Orange House.

“We knew everything he was planning and how much money he was allocating to the campaign and we made counter plans,” said Suna East MP Junet Mohamed who was the leader of the campaign secretariat.

At the heart of the battle for the seat was Ruto against Raila.

Raila’s team had a three-tire campaign structure that was well coordinated and financed.

Raila’s team met delegates from all tribes in Kibra daily in the last 10 days at Jaramogi Oginga Odinga Foundation at Upper Hill, the Kibra campaign headquarters.

The second team was the campaign secretariat, which was led by Junet and brought together the party secretariat led by Edwin Sifuna, Okoth’s team and about 70 ODM MPs.

Mariga's score in Kibra was a classic on-target goal - Duale

The third group comprised of Nairobi ODM officials led by George Aladwa, the chief operations officers of the campaign, all Nairobi MCAs and other grassroots leaders in Kibra.

The three groups segmented the constituency into tribes and met members of different communities from Monday to Friday with their meetings culminating with weekend rallies where each community was dominant.

Joho, Junet, Fatuma Gedi and other Muslim leaders focused on the Nubian and Muslim communities in their town hall and door-to-door campaigns.

According to multiple sources, Raila’s team raised Sh15 million in a harambee and got other donations in kind and cash.

“We did not take chances. Our biggest strength was organisation and unity of purpose,” said Dagoretti North MP Simba Arati who was the chief mobiliser.

Unlike the previous election, the party had a well-manned tallying centre, which received real-time results.

The party bought and deployed nearly 200 smartphones, which its agents used to transmit all incidents and results from each polling stream.

By 9pm the party had tallied all its results and they showed Imran had won by the landslide with a 40 per cent voter turnout.

To guard their votes, the party deployed “ a rapid response” squad led by Arati, Junet and several other MPs backed up by a group of youth. They moved from station to station sorting out any troublemakers.

MP had said Ruto was unable to plant a seed in Kibra after Jubilee's Mariga lost.
News
2 years ago

“We campaigned properly, spoke to the heart of our people and we managed to protect our votes and made sure there was no voter bribery,” said Aladwa

MP-elect Bernard Okoth was quick to point the pivotal role the ODM leader played in ensuring his poll victory.

“I want to thank our party leader Raila for standing with me in every step of this journey until I have been declared the winner,” Imran said shortly after being announced the winner.

In another well-thought strategy, on D-day the opposition team leaving nothing to chance deployed its MPs and youths to the 184 polling stations to ensure everything moved smoothly.

And since Old Kibera Primary School had been merged with Raila Education Centre, the two ensured voters at the latter did not go back home on finding anybody at the polling centre.

Agents were strategically placed at Raila Education Centre to give directions to voters who had no information about the merging of the two polling centres.

“This is one of the reasons why we had requested that the updated voter register be made pubic for scrutiny so that people would have known in time where they are supposed to vote,” Amollo explained.

It is these ODM schemes that combined to hand Ruto a humbling defeat after months of intense campaigns marked by promises of government projects should the Jubilee candidate win the race.

Yesterday, DP Ruto put on a brave face terming Mariga’s performance an indication that Jubilee was making serious inroads in the area that has been traditionally an ODM zone.

“Pongezi (Congratulations) Benard Okoth for Kibra. Congrats Mariga, Team Jubilee and supporters for daring the so-called 'bedroom', braving the chaos/violence, to double our vote from 12 per cent (2017) to 26 per cent now. Our competitors came down 78 per cent (2017) to 52 per cent. They retained the seat; we have served notice,” Ruto said.

"Kibra you are amazing! In spite of questionable reinforcements, the con-handshake candidate narrative, the violence/ intimidation, you went past the gate, the door and voted Jubilee a third of 'bedroom'. You have changed the politics of not just Kibra but Kenya. We are indebted."

"Now the truth is out there, you know the friends to work with. All best," Murkomen twitted.

Inside ODM's strategy to recapture Kibra

ODM has segmented the constituency into wards with each assigned to at least 10 MPs.
News
2 years ago

DP's goal is to wrest Kibra from his nemesis Raila and bolster his presidential prospects.
News
2 years ago

People close to the President said he "has more pressing national issues to attend to ".
News
2 years ago
by ALLAN KISIA AND LUKE AWICH
News
09 November 2019 - 05:00