Moses Kuria has not shown any signs of leaving Kenya Kwanza Alliance.

•When scanning the code,  the link does not lead one to the Moses Kuria story but to a different website with no sight of the story. 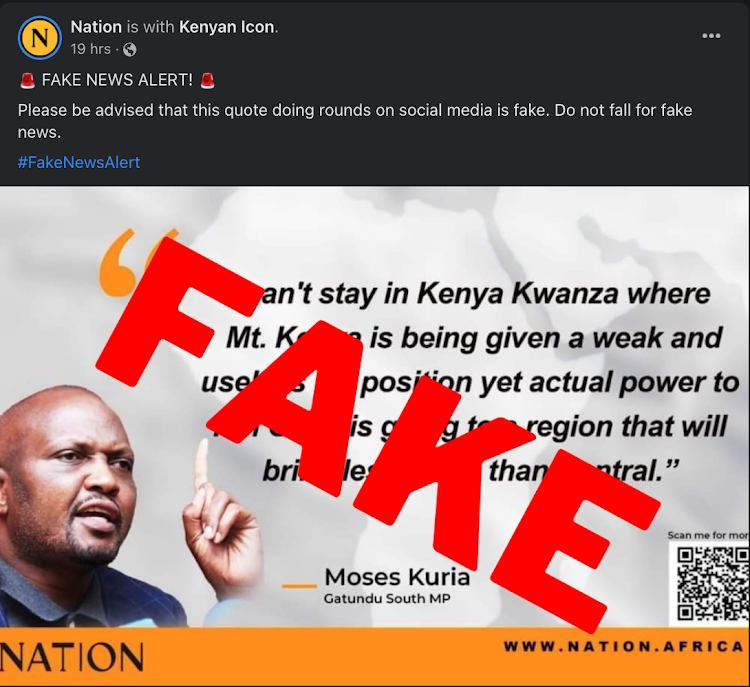 The post which has been shared widely on social media has Kuria’s image and contains the Nation Africa media house logo.

The post indicates that the legislator is hinting at leaving Kenya Kwanza because of a power-sharing deal.

“I can’t stay in Kenya Kwanza where Mt. Kenya is being given a weak and useless DP position yet actual power to run Gov’t is going to a region that will bring less votes than Central,” reads the post.

Nation Africa flagged the statement as fake and urged the public to ignore it.

“Please be advised that this quote doing rounds on social media is fake. Do not fall for fake news,” reads the post.

The Star also scanned the QR code attached to the fake post to establish whether additional information on the subject matter can be obtained.

Upon scanning, the link does not lead one to the Moses Kuria story but to a different website with no such story.

EACC  maintained that the  allegations constitute political propaganda which should be ignored.
News
1 month ago

Safaricom asked Kenyans to rely on communication posted on their verified social media handles.
News
1 month ago
WATCH: The latest videos from the Star
by MAUREEN KINYANJUI News Reporter
Fact Checker
26 May 2022 - 21:52