Inside the ground and air combat against relentless desert locusts

While it is impossible to eradicate them, all efforts are being made to reduce the numbers so they do not multiply 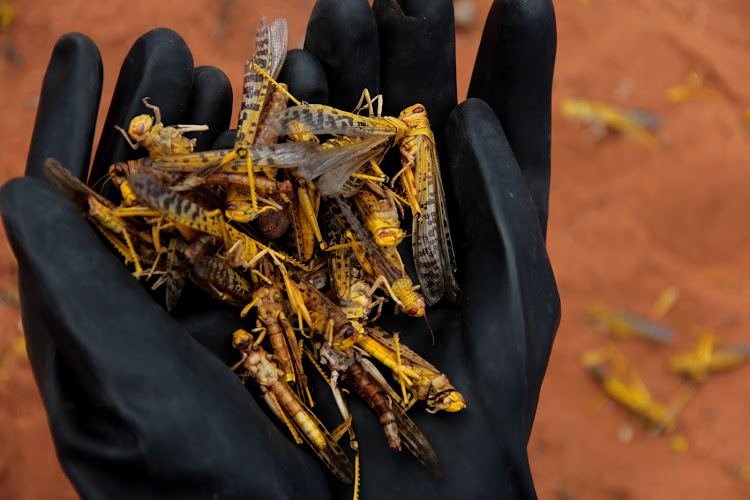 Some of the dead sprayed Locusts
Image: EZEKIEL AMING'A

It is six months into the fight to eradicate the desert locusts ravaging the country — but the enemy just won't go away.

The ‘armies’ have been hungry, angry and resilient. They still devour anything and everything green that comes their way, besides endangering the livelihoods of pastoralist communities.

The millions of locusts have wiped out thousands of hectares of agricultural and pastoral land, putting the country’s food security at risk.

And experts are warning of a second wave of the latest generation of the insects, which are due to hatch this June as crops are to be harvested.

“The heavy rains, exacerbated by climate change, have also created the perfect conditions for the breeding of locusts, raising fears the swarms could be 400 times larger than the original swarms,” Oxfam said last week.

The state, in collaboration with the UN’s Food and Agriculture Organisation and other partners, has deployed a multi-pronged approach to wipe away the ‘terrorists.'

Ground and aerial survey and spray campaigns have been mounted, with teams operating round the clock to salvage the country’s economy from the destructive insects.

So, who is at the centre of this fight? How is it coordinated? Where is the control centre? And will the country finally win this war in time to save livelihoods?

These are the questions we sought answers for in our recent tour of Isiolo, Marsabit and Samburu counties — the epicentre of the desert locusts.

Four days at the Isiolo Agricultural Training College, one of the five control and coordination nerve centres in the country, revealed an intricate, elaborate and seemingly expensive exercise.

Besides Isiolo, the centre has five other command posts: Masinga, Marsabit, Wajir, Garissa and Turkana.

A team of pest control experts from both the Ministry of Agriculture and FAO, military personnel, National Youth Service personnel and pilots are at the centre of the battle to defeat the voracious enemy.

The team includes Stanley Ngetich, the assistant director for pest control in the ministry in charge of Isiolo base, and Ambrose Ngetich, FAO’s control operations in the region.

Stanley says before the actual spraying is done, ground and aerial surveillance must be done the previous evening to locate the swarms.

“You cannot wake up and start spraying. We must get information from the locals or our teams on the ground. But luckily, we now have an app that helps us locate where they are,” he says.

The information is then relayed to the scientists, pilots and the ground team, who will rely on it to spray the insects early the following day.

We are asked to wake up at 5am to catch up with the pilots at the Lewa Conservancy airstrip.

Lewa is also the command base from where information on location and sizes of swarms are relayed to the FAO headquarters in Rome and Kilimo House in Nairobi.

Spraying is done between 7am and 9.30am for safety reasons as flying insects may choke the engine of the aircrafts.

But the pilots and their aides wake up earlier to load the spraying chemicals in their specialised aircrafts.

At 6.30am, we meet Rob Taylor, a South African pilot who has been spraying the insects since early March.

Taylor, who has done agricultural spraying for 36 years now, works for the Orsomond Aviation and is in the country, alongside his cousin, courtesy of FAO, which has contracted them.

Taylor has made over 70 trips to the locust-infested areas of Turkana, Mandera, Wajir and Marsabit since March 10, when he came into the country.

“We are trying to reduce the number of the second generation more than anything because whatever we have now can multiply 10 times if left uncontrolled,” he says.

With his vast experience in agricultural spraying, Taylor says we should temper our expectations.

“I don’t think you can completely eradicate them no matter how efficient you are because locusts remain on the ground and they're gonna hatch. But the thing is to reduce the numbers so they do not multiply,” Taylor says.

He says if left unchecked, the devastation can be catastrophic and could lead to starvation because they will destroy all the crops.

“We do between 30-minute and one-hour spray time a day. With two aircrafts, we can do 1,000 hectares a days,” Taylor says. 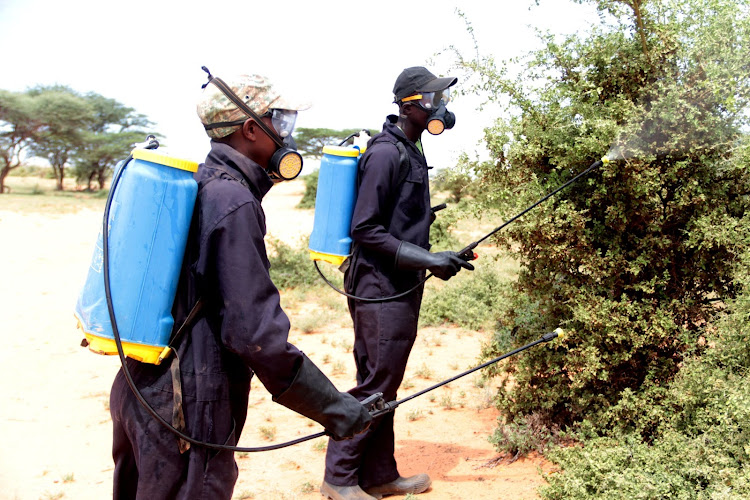 Hundreds of kilometres away in Marsabit, we meet Renson Waswa, an NYS officer, fully kitted.

He, like five other NYS colleagues in his company, has heavy duty googles, a black apron, green rubber gloves and gumboots. On his back is a 16-litre manual knapsack sprayer.

“If you look critically, you will see all desert locusts are buried in the sand. Once you extract them, part of their body has disintegrated. Those are eggs they have planted in the sand. Each insect lays about 1,000 eggs,” he says.

With this, Waswa and his team must return to the same location in 14 days to spray the newly hatched nymphs before they grow into hoppers (mature locusts).

This probably explains Oxfam's warning of a second wave of the destructive insects this June.

Waswa is among the 5,000 NYS personnel that have been retained in the field for ground surveillance and spraying.

The swarms have drastically dropped in both size and number since late last year, when they crossed over into the country from the neighbouring Ethiopia and Somalia.

Agriculture CS Peter Munya said applauded the teams for the progress made.

“Our teams have done a good job, but there is still a danger of locusts coming from other countries because this is a regional problem,” he said.

“At the peak of the invasion, locusts had spread to 27 counties. We mobilised ourselves, increasing our personnel and equipment, and now we have locusts in only five counties: Isiolo, Marsabit, Samburu, Turkana and a little bit of Laikipia.”

Besides support from FAO and others partners, Munya said the government has spent Sh530 million in the fight since January.

The money has gone towards acquiring 1,000 personal protective equipment for the field officers, 133,500 litres of pesticides and 10 vehicles mounted with sprayers.

Penithrothion, cypermethrin, dethamethrin and sumithion are the common chemicals used. About half litre and one litre is used to spray one hectare.

These insects are very resilient. Once you spray them, they can still fly for about 60km and survive up to three days

Initially, the chemicals were imported from Japan and Australia, but this was hampered by the lockdown of the airspace due to the Covid 19 pandemic.

“We are procuring 10 vehicles from FAO and another 10 through World Bank support,” Munya said.

Munya said the government, with the help of FAO, has deployed two surveillance and five spray aircraft.

Of the five sprayer aircraft, two are owned by the Kenya Defence Forces. There are also three KDF vehicles, 42 motorised sprayers, 900 hand-held sprayers, 700 sprayers and another 9,800 PPEs from the ministry.

There are also 240 extension workers in counties and 200 youth scouts supporting the surveillance.

“We may be succeeding in deci­mating homegrown ones, but we are always in danger of getting new swarms from the region and we are always on high alert. We are told that towards the end of June, July we may get new ones," Munya said.

"But even where we are spraying in the five counties, the likelihood of some locusts maturing and laying eggs is there. Some swarms have actually managed to lay eggs, which have hatched.”

Col (Rtd) Julius Ngera, an experienced officer coordinating the fight, said the battle is a delicate one because of the multiplication nature of the insects.

Ngera has a team of paramilitary, civilians, police officers and scientists at his disposal. They have each been assigned specific roles.

“These insects are very resilient. Once you spray them, they can still fly for about 60km and survive up to three days,” he says.