The hurdles to saving Mau forest 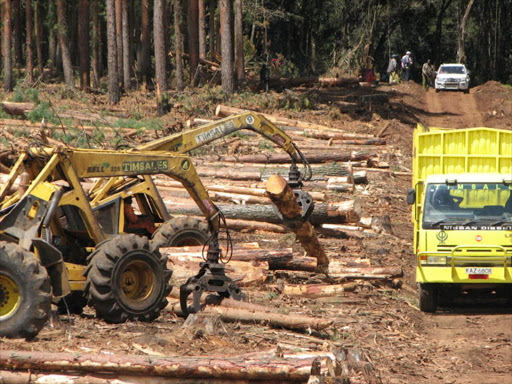 Efforts to save the Mau Forest, a vital water tower, are being undermined by encroachment, soil erosion and politics, even as studies show an environmental disaster is unfolding.

The livelihoods of millions of Kenyans who depend on the forest are threatened as rainfalls patterns begin to change in the surrounding areas. The rivers originating from this expansive forest are also receding and are heavily polluted.

A survey by the National Environmental Management Authority in 2009 showed that the levels of phosphates and nitrates have reached a dangerous proportion in the Mara River, which stretches to Tanzania. The chemicals are released into the river when rainwater washes off the fertiliser used by farmers who have encroached on the forest.

Soil erosion has also increased as the farmers clear the forest and leave large swathes of steep land bare. The most affected area is the Maasai Mau Forest, which straddles five districts in the South Rift region, in Kericho, Nakuru and Narok counties.

Rainfall continues to dwindle, devastating agriculture, Kenya’s economic mainstay. Narok county, which has 64,000 hectares under wheat cultivation, is likely to be the most affected.

Mau Forest’s degradation is happening amid a rise in global warming, which is most severe in the southern hemisphere. Otherwise known as climate change, it refers to the rise in global temperature caused by the accumulation of carbon dioxide and other gases. Causes include tree cutting. Without trees, carbon dioxide accumulates in the atmosphere and forms a gaseous blanket that holds heat around the earth.

The Maasai Mau Forest is part of the Mau Forest complex, which straddles several counties and is Kenya’s biggest forest. The complex covers 400,000 hectares and is the biggest single block of forest in East Africa.

The effects of its degradation are being felt across the borders in Tanzania, where authorities are said to be concerned over the destruction of the forest. The Mara River, with its source in Mau Forest, stretches into Tanzania and is a crucial source of water for the Serengeti National Park in Tanzania.

There are growing campaigns on the consequences of climate change in a bid to initiate preventive action on air pollution, especially carbon-related emissions. If the global average temperature were to rise by 20C pre-industrial levels, many ecosystems could be seriously damaged and might go extinct.

East Africa is already experiencing the impact of climate change. The glaciers of Mt Kilimanjaro and Ruwenzori Mountain are melting, sections of coral reefs off the coast of East Africa are bleaching, and some species are shifting or disappearing.

The Maasai Mara Game Reserve in Kenya and Serengeti National Park in Tanzania is synonymous with the famous wildebeest migration, the spectacular journey of millions of wildebeest (Gnu) and other herbivores in search of food and water. The lifeline of the Mara-Serengeti ecosystem is the Mara River, a transboundary river shared by Kenya and Tanzania. The river is important for nature and the livelihoods of the people in the basin. It drains into the Lake Victoria, which is part of the larger Nile Basin.

Reports indicate that the water flow in the Mara River has reduced considerably in 10 years. Extensive deforestation in its water shed, burgeoning human settlements, inappropriate land use practices in the upper and middle catchment and the proliferation of tourist facilities within its riparian zone have all contributed to this reduced flow.

Excessive run-off, caused by loss of ground cover in the drainage basin, has also resulted in flooding in downstream sections of the river. Silt, fertilisers and pesticides find their way into the river, a consequence of poor agricultural practices by the farming communities in the basin.

Demand for sanitation services has increased considerably with the rise in urban population and hotels along the river. Flood flow regimes have been disrupted, affecting fish breeding in Mara wetlands.

A balance needs to be struck between allocating water for direct human use (agriculture, domestic supply, power generation) and indirect use (benefits provided by the ecosystem). Planning for environmental flows is, therefore, necessary for the Mara River basin.

An environmental flow assessment of the Mara River will determine the water needs of biodiversity and the riparian communities along the river. It will also determine the reserve or base flow (the amount of water that should be left within an ecosystem) to maintain the needs of the rural domestic water users and ecological processes.

Water is fundamental to the livelihoods of the people in the Mara basin, who depend on it for drinking and domestic use as well as watering livestock. Fisheries and agriculture are equally vital for food security and income and rely strongly on continuous flows in this river.

The wildebeest migration attracts million of tourists each year, generating revenue for the Kenyan and Tanzanian governments and creating jobs for residents.

Studies have revealed that severely reduced water flows at the Mara River could lead to a catastrophic die-off of the wildebeest, translating into huge biodiversity and economic losses. Other losses are plants, wildlife, aquatic life and vegetation, which all have strong water needs and are interdependent. It could also lead to human-wildlife conflict due to competition for water and land.

Faced with this threat, residents came together in 2003 and formed an organisation called the Mara River Water Users Association (MRWUA) in Narok county.

Association manager Kennedy Onyango said conservation of the Mara River basin is urgent, as it is home to about 1.2 million people. “We are creating awareness on conservation, reforestation, spring protection, water harvesting technologies and energy-saving technologies,” he said.

He adds that their main goal is to ensure good quality and adequate water supply from the Mara River for sustainable ecosystem functioning and basic human needs.

The group realises how intertwined the conservation process is to residents’ livelihood. Armed with this knowledge, the association has introduced alternative sources of livelihood to residents.

“Various groups are involved in agro-forestry, bee-keeping and goat-keeping. We recently introduced avocado farming to more than 1,200 farmers. These activities have seen a reduction on their reliance on forest products,” Onyango says.

The Association has formed 40 Catchment Management Groups. As it endeavours to implement conservation activities, MRWUA has partnered with several organisations.

These include the World Wide Fund for Nature, Nema, Ministry of Agriculture, Water Resources Management Authority and various research organisations.

The association has encountered several problems. Lack of finance has been a great hindrance to project implementation.

Poverty levels within the basin have also hampered the association from implementing its initiatives. The politicisation of the Mau Forest issue has not helped matters.

The government evicted settlers in Maasai Mau region in 2005 and in South West Mau in 2009, but the restoration process has been hampered by political interferrence from leaders, according to the conservationists.

Stephen Kishoyian, chairman of the Narok County Youth Coalition for Change, said politics is unwittingly dimming hopes to save the Mau Forest. He said leaders have been politicising the forest instead of focusing on conserving it. He urged them to emulate laureate Prof Wangari Maathai’s conservation efforts.

“While on the surface all is on course for the conservation of 400,000 hectares of the Mau Forest complex, politicians opposed the restoration of the Kenya’s biggest water tower in the search for votes,” Kishoyian said.

He said the government should ensure all the critical areas are salvaged. “The Maasai Mau is such a critical water catchment that if it is left to degrade any longer, there will be no tree left standing and then rivers will dry up,” Kishoyian said.

The chairman said logging and charcoal burning are going on unabated. “The drought being experienced in many parts of Narok and its environs is due to indiscriminate clearing of forest cover and unsuitable agricultural activities,” he said.

The youth leader called for the illegal trade in charcoal to be stopped to conserve the environment. “The government and environmentalists put too much effort on Mau Forest, yet a lot of destruction was also going in private farms,” Kishoyian said.

He said people need to heed the government’s plea for farmers to plant more trees, especially in private farms, urging everyone to devote 10 per cent of their land to trees, as required.

He said carbon dioxide, being a greenhouse gas, exacerbates global warming, and the area is likely to experience drought and desertification.

The Kenya Water Towers Agency warned of new encroachments into the Mau Forest complex. Chairman Isaac Kalua said some illegal settlers have been going further into the forest and causing more destruction.

He said the destruction being witnessed at Kenya’s largest water tower has contributed immensely to the dwindling water levels at Mara River.

“There has been unprecedented encroachment on the forest, which has seen huge tracks of forest land being cleared for cultivation. They have been an increase in illegal logging activities by people who present forged permits to our enforcement officers,” Kalua said, adding that the agency will soon automate licence issuance to ensure genuine people harvest products.

He said political statements by the elected leaders who claim that no one will be evicted have contributed to the new encroachment. Kalua said conservation efforts will not bear the required results, if politicians incite their supporters to invade the forest.

But the settlers who were removed by the government in 2005 say they would only move out of their farms if the government fully compensates them at the current market value.

Spokesman William Cheruiyot said these people know Mau as their only home and their parents acquired the title deeds in the right procedure, so the government should not their rights for granted.

“If property should be acquired compulsorily by the government, then the law should be followed, which states that people should be fully compensated before they are evicted out of the allegedly grabbed forest,” Cheruiyot said.

Retired senior chief Christopher Bore said the government will only apologise to them by compensating them following the in 2005 evictions.

“The 2005 evictions were a violation of human rights and destruction of property was done during that time. A lot of people suffered psychologically, mentally and spiritually. Women were raped and miscarriages occurred, and these are the issues that need to be addressed. What we want is the state to compensate us fully, and we will move out of our farms,” Bore said.

He said: “The forest needs to be conserved, but it should be approached in a humane way. If the government wants to revert the area to be a forest, they have to find alternative land for the settlers and pay for their development.”

“Since 2005, people have been suffering as result of threats and intimidation from the provincial administration. We call on President Uhuru Kenyatta and Deputy President William Ruto to immediately lift the caveat because the titles were genuinely issued by the government,” Koech said. He said the caveat has hampered development.

“The Jubilee leadership should give a lasting solution to the thorny Mau issue. They should liaise with all South Rift leaders and mostly the Narok government, so that Kenyans can benefit from government-sponsored projects,” he said.

The MCA called on the government to clearly mark the boundaries separating the gazetted forest and group ranches, so the evictees can develop their farms.

But Narok Governor Samuel Tunai assured the settlers that the government is in the final stages of lifting the caveat on title deeds for people living around Mau Forest.

“We have reason to support Jubilee because it has worked hard to ensure the caveat is lifted,” he said, adding that people’s lives will be improved, as they can use the titles as collateral in banks.