UN should look at speeding up DR Congo withdrawal - government

Under the current agreement the UN forces were due to leave by the end of 2024.

• The statement follows violent anti-UN protests across the eastern part of DR Congo that left many dead, including four UN peacekeepers. 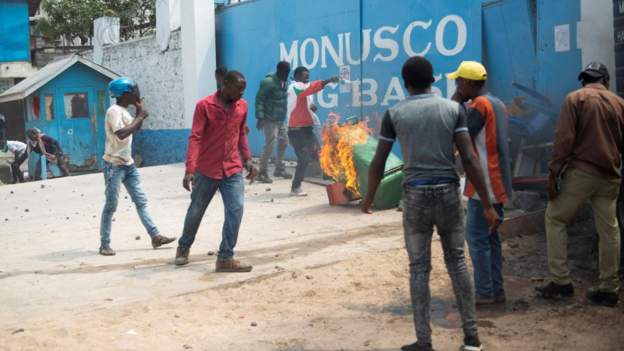 A spokesperson for the Democratic Republic of Congo’s government has told the BBC's Focus on Africa radio programme that the country hopes to speed up the withdrawal of the UN peacekeeping mission in the country.

Under the current agreement the UN forces were due to leave by the end of 2024.

But that timetable is not quick enough for the authorities.

"We’ve been having [the UN] for the past 20 years and the issue of insecurity still remains. It's better maybe to have our army and police with our challenges and fight on our own those who are bringing trouble and war to eastern DR Congo," government spokesperson Patrick Muyaya said.

The statement follows violent anti-UN protests across the eastern part of DR Congo that left many dead, including four UN peacekeepers.

Although those responsible have been suspended, the incident has further inflamed feelings.

The UN mission, known as Monusco, has been operating in the east of the country for more than a decade.

Its aim is to bring peace and stability to the region which has seen insecurity for over 20 years.

However, some in the country have said the force’s presence has brought no peace and have been urging the peacekeepers to leave immediately.

Monusco chief Khassim Diagne has told the BBC that the mission will be "evaluated". He added that a gradual and responsible transition plan will be established.

Over the past week at least 20 have died during protests against the UN peacekeeping mission.
News
1 month ago

Protests against the UN mission in the country, have since Monday resulted in the deaths of 19 people
News
1 month ago

At least 17 people including three members of the UN peacekeeping force have been killed, officials say.
News
2 months ago
WATCH: The latest news from across Africa
Post a comment
WATCH: The latest videos from the Star
by BBC NEWS None
Africa
02 August 2022 - 22:14
Read The E-Paper