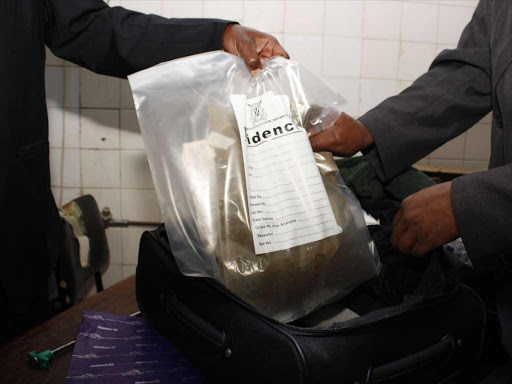 A file photo of heroin that was netted from a German at JKIA. /THE STAR

A Singaporean was Wednesday arrested and four kilograms of heroin valued at Sh12 million were found on him.

The man identified as Rahmat Mohd Noor, 57, was traveling from Nairobi to his country through Dubai when he was intercepted by police at the Jomo Kenyatta International Airport (JKIA).

Police said they conducted a search of his luggage and recovered the narcotics that were concealed in one of the suitcases he had.

The narcotics were packed in yellowish polythene paper.

The suspect was taken to custody for further grilling ahead of planned arraignment as efforts to establish the source of the same were being made.

Anti Narcotics Unit officers handling the matter said they are puzzled by increasing cases of foreigners trying to sneak out of the country with narcotics.

The source of the drugs remains a mystery amid indications the suppliers are in the country.

In some incidents, the drugs are sent from Kenya as packages to destinations in European countries.

Two months ago, almost two kilograms of heroin was intercepted at the JKIA while destined for the Netherlands.

One of the packages in the cargo had been packaged and dispatched from Kitale to the Netherlands while another one originated from Busia and was destined for the United Kingdom.

The sender and origin of the drug are yet to be known so far.

Police said the recovery indicates traffickers are using all manner of means to send the narcotics to their intended market.

Heroin is one of the most trafficked and consumed narcotics at the Coast and the country at large.

Other most trafficked and abused narcotics include cocaine and other psychotropic substances.

Police say traffickers now use roads as opposed to airports to carry out their business.

The most commonly trafficked narcotics from Tanzania and through Uganda is heroin.

In 2019, the European Union Ambassador to Kenya Simon Mordue said the Kenyan port of Mombasa accounted for 30 per cent of illegal heroin smuggled into the EU market.

The revelations were not new to some government officials who know the trend of the business.

Most of the heroin in the country originates from Afghanistan through the Indian Ocean.

Kenyan security agencies seized the second-biggest haul of cocaine weighing 100 kilos and valued at Sh598 million in 2016 in Mombasa which was disguised as sugar.

The case was however later dismissed in court.

Most wanted fugitive Abdi Hussein extradited to US

Ahmed is wanted in the US after he was charged in an indictment case.
News
3 weeks ago

The drugs were stored in 10 travel bags and 13 drums, said the National Drug Law Enforcement Agency.
News
1 week ago
Post a comment
WATCH: The latest videos from the Star
by CYRUS OMBATI Chief Crime Reporter
News
22 September 2022 - 09:29
Read The E-Paper