Shioso said that the security of Kenyans is a top priority.

• Shioso said the UWIANO platform for peace has partnered with police to help to minimise and prevent local conflicts before, during and after elections.

• Chairman Samuel Kobia said that spaces like political WhatsApp and Telegram groups should be monitored. 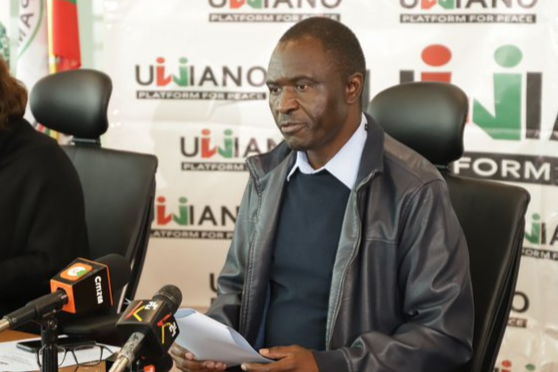 National Police Service (NPS) has reassured Kenyans on their safety during the August polls.

While addressing the press on Friday, NPS spokesperson Bruno Shioso said that the security of Kenyan's is a top priority around election period.

"Police has prepared to deploy at least 150,000 police officers to provide security during the August 9 General election," he said.

Shioso added that Kenyans should not fear but rather confidently play their role in the elections, and leave the rest to agencies charged with security to do their part.

He called on Kenyans to cooperate with the police so that they can fulfill their mandate of delivering a safe and secure general election.

Shioso said the UWIANO platform for peace has partnered with police to help to minimise and prevent local conflicts before, during and after elections.

At the same time, the National Cohesion and Integration Commission (NCIC) called for close monitoring of all social media spaces ahead of the polls.

Chairman Samuel Kobia said that spaces like political WhatsApp and Telegram groups should be monitored.

Kobia called on the Communication Authority of Kenya (CAK), law enforcement agencies and human rights organisations to devise mechanisms to mitigate the negative use of social media spaces.

"Just four days to elections, we as peace actors would like to further recommend the peace actors and Kenyans intensify vigilance and be ready to report any threats to peace in their communities," he said.

He urged the international community to release emergency support and response to areas that may experience any form of electoral disturbances.

Police denied the claims and asked Ndungu to focus on his campaigns peacefully.
News
1 week ago

He said the Uasin Gishu threat leaflets are as a result of reckless talk by Kenya Kwanza.
News
1 week ago
WATCH: The latest videos from the Star
by PERPETUA ETYANG
News
05 August 2022 - 13:26