Kibicho: My remarks on NIS about Raila are credible

Kibicho noted that as a ministry they undertake their work seriously and with a lot of patriotism.

·  Speaking in Ndia, Kibicho noted that as a ministry they undertake their work seriously and with a lot of patriotism and have multiple sources to undertake their research.

·  The PS noted that his ministry undertakes a mapping exercise and as such is so much versed with the state of every part of the country. 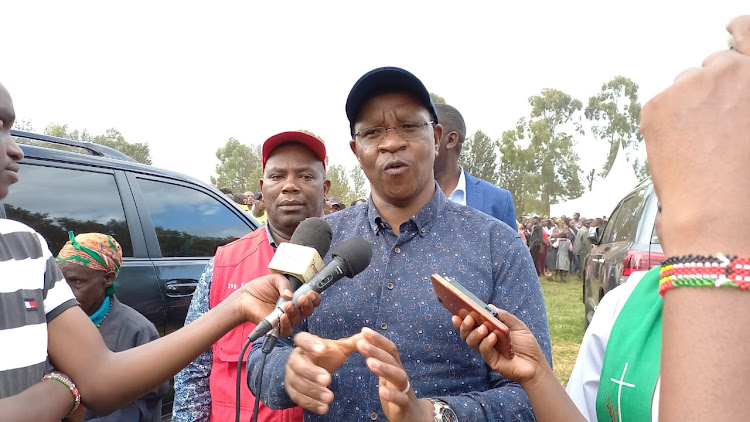 This was in response to reactions made over remarks he made in late May on a national TV station where he indicated that Raila, according to an intelligence report, will bag 60 percent of total votes cast in the first round one thus no need for a re-run.

His disclosure attracted mixed reactions from the Kenya Kwanza brigade led by Deputy President William Ruto who told him off for “ feeding the public with propaganda.”

According to the DP, the intelligence report is handed to the president and himself before being trickled down to other state officers.

Ruto claimed that the report indicated that his coalition was in the lead by 8 percent contrary to what Kibicho claimed.

On Friday however, Kibicho stood by his word saying the report they dispense is credible and not meant to evoke emotions.

The PS noted that his ministry undertakes a mapping exercise and as such, he is so much versed with the state of every part of the country.

“We have many sources where we seek and get our information. As a result, I have so much confidential information on my hands and if asked to give it out for the sake of the public well-being, I’m in a position to do so. Therefore, the information we give is grounded on truth and not for the sake of impressing ” he said.

Kibicho further reiterated that he will not be cowed by his opponents who continually accuse him of playing politics.

Instead, he noted that he and his colleagues will unapologetically continue undertaking civic education to the electorate as they too are stakeholders in the Kenyan community.

Kibicho said Kenyans have a right to get progressive and development-oriented-minded leaders and such will not be silenced by the few castigating them.

“We have a responsibility to enlighten our people to elect responsible leaders and as such, we won't back down on this mission simply because a group of people are feeling unease. We want the Kenyan people to be aware of the characters who are seeking their votes and thus be able to make the right decisions.”

The PS further noted that his ministry is working round the clock in a bid to see to it that security is beefed up across the country in the run-up to the polls.

He noted that through a multi-agency team, his department is currently mapping out the country in a bid to identify some of the volatile zones for appropriate action.

He said that they would continue working together with the relevant stakeholder to see to it that both the campaign and electioneering season is flawless.

The PS further cautioned candidates using the youths to cause violence in their opponent's meetings.

He noted that this would not be tolerated as he appealed to all candidates to be in the lead in maintaining peace.

“There is an unfortunate trend cropping up where some politicians are using the youths to disrupt their opponents' political meetings. That is very unfortunate because you as a leader are supposed to be in a position to guide them instead of misleading them.  We have a country to protect and as such should see beyond this election season.”

Kibicho said NIS report shows Raila is ahead in the presidential race.
News
7 months ago