Waiguru said the appointment will help strike gender and more so regional balance.

•While unveiling him as his deputy, Waiguru described Mutugi as a diligent achiever and a civil servant who has demonstrated hard work in his current capacity. 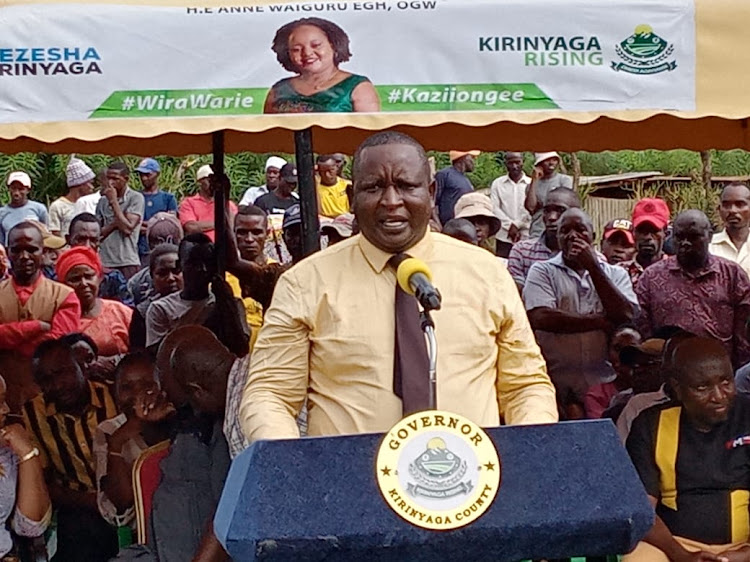 While unveiling him as her deputy, Waiguru described Mutugi as a diligent achiever and a civil servant who has demonstrated illustriousness in his current capacity.

In addition, Waiguru said the appointment will help strike gender and more so regional balance in the leadership positions.

"Since I got my current governor (Peter Ndambiri) from Mwea East in the 2017 general election. I have this time found it suitable to get my August 2022 running mate from Mwea West," She said.

Mutugi is not new to politics as he previously served as Wamumu ward MCA between 2013-2017 before being nominated to the position of county education CEC in 2017.

On his part, Mutugi expressed his gratitude for his appointment and pledged to continue being loyal to the governor and demonstrate servanthood and result-oriented leadership.

"I'm indeed humbled for picking me to serve as your running mate from among so many eligible candidates. Thank you for demonstrating your trust in me and I promise you that I will not let you down but will continue being humble and loyal to you," he said.

In equal measure, he thanked the Wamumu ward electorate for electing him in 2013, a position he disclosed propelled him to a higher position of a CEC.

"I promise to pay up the favour by mounting a vigorous campaign that will enable us to secure the seat for a second term."

Under Waiguru's tenure, he pledged his unrelenting support to improve rice farming by agitating for a more reasonable fee charged on the rice irrigation water.

He requested Waiguru to join hands with the incoming national government should they emerge victorious in overseeing the economic promotion of tomato farmers.

He said county farmers have continued to face immense frustrations as a result of the imported tomatoes which have since flooded the Kenyan market.

He expressed optimism that should the Kenya Kwanza Alliance take over power, it will offer subsidized fertilizer to farmers.

Mutugi's appointment brings to five the number of running mates who have been unveiled by candidates thirsting for the Kirinyaga governorship seat.

Other running mates who have been unveiled are renowned Lawyer Ndegwa Njiru who has been picked to deputize Narc-Kenya's candidate Muriithi Kagai as Esther Njoki Kabiru will be Safina party's governorship candidate Peter Gitau's running mate.

Koech, Chebon and Kipng'ok are all from Baringo Central constituency.
Counties
1 month ago
WATCH: The latest videos from the Star
by WANGECHI WANG'ONDU
News
24 May 2022 - 18:41