•Wanjao, besides being a professional accountant, is a renowned industrialist with an interest in manufacturing building products. 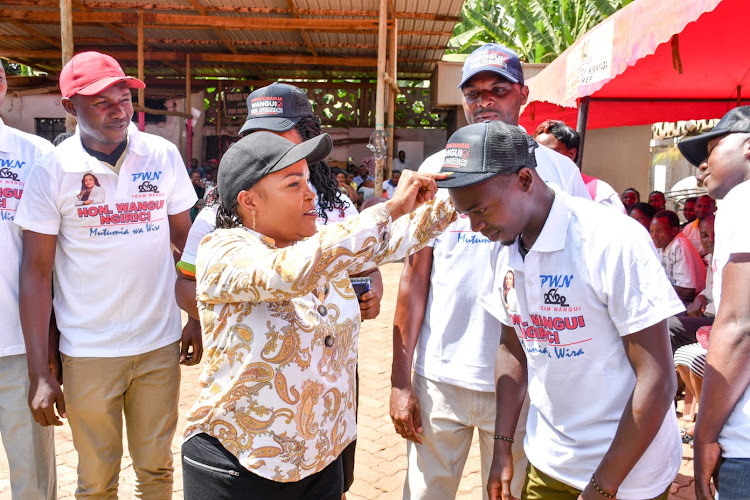 Ngirici took to her social media account to update the developments.

Wanjao who was born and bred in Ndia of Kirinyaga county is an accomplished public servant who rose through the ranks at the Kenya Revenue Authority from a junior officer to senior commissioner before he resigned and ventured into businesses.

Wanjao, besides being a professional accountant, is a renowned industrialist with an interest in manufacturing building products.

He started his education at Gacharu primary school and proceeded to Kamuiru boys schools for his secondary education and later joined Nairobi school for his A levels.

Wanjao later joined the University of Nairobi where he graduated.

He joined the tax administration in the ministry of finance in 1991 as an assessor trainee.

He has lauded Wangui for nominating him as her running mate saying he will bring a wealth of experience in management.

Wanjao who unsuccessfully gave a stab into the governorship race in 2017 says he is ready to deputize Wangui and bring a positive change in the county.

He says that with his experience in management, he will be able to complement an outgoing woman rep who he says has proved her prowess in public office and management of public funds.

He has pledged to identify all the loopholes in the county where funds are lost.

Wanjao said in order to deliver services to Wananchi, all officers will be subject to a performance contracting programme which will be reviewed annually to establish whether they have achieved set targets.

He said that if they clinch the seat, the focus of their administration will be on Health, Value addition of horticulture produce like tomatoes, setting up industries, youth employment and reviving the tourism sector in the county which hosts a larger part of Mount Kenya.

He has promised to serve the people of Kirinyaga under Wangui and ensure there is a smooth running of government which is devoid of tussle and unnecessary infightings.

The assembly says a query certified as urgent shall be replied to within seven days.
Counties
1 week ago

The promise of devolution is being choked by corruption.
Opinion
6 days ago

Ngirici said that politicians must stop dragging the country back.
Counties
1 month ago

We will interrogate manifestos on health services, vow medics

Clinicians chairperson Wachira says they will put politicians to task on how they plan to revive the sector.
Counties
4 months ago

Ngirici hits out at women leaders photographed with Waiguru

“If you were elected in Nyeri, Nakuru and the Coast, channel your energy there."
Counties
7 months ago
“WATCH: The latest videos from the Star”
by AMOS NJAU and WANGECHI WANG'ONDU
News
14 May 2022 - 14:45