They gave the Raila Odinga led coalition a 48-hour ultimatum (which ends today) to bring them to the table or face a mass walkout.

• “If within 48 hours our issues are not addressed and our political parties do not speak to us, we shall gather and give directions,” Ouko said. 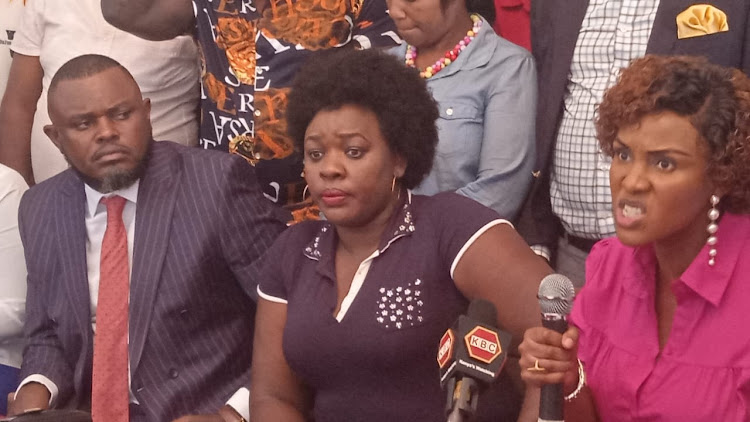 A looming mass walkout by Nairobi aspirants who did not get party tickets might be witnessed in the Azimio la Umoja One Kenya Alliance, if the coalition fails to resolve nomination grievances.

As a result, they gave the Raila Odinga led coalition a 48-hour ultimatum (which ends today) to bring them to the table or face a mass walkout.

Led by former Nairobi Education Executive Committee member Janet Ouko and Nairobi Woman Representative Aspirant Wangui Ng’ang’a, the faction has threatened to lead a mass walkout from Azimio if their concerns are not addressed by Raila and President Uhuru Kenyatta.

“If within 48 hours our issues are not addressed and our political parties do not speak to us, we shall gather and give directions,” Ouko said.

The ex-Nairobi  CEC, who was eyeing the Jubilee ticket for Kasarani Constituency was shown dust when the party decided to front incumbent Mercy Gakuya to defend her position in the coming polls.

“No consensus was reached before giving out direct tickets. Jubilee called for a meeting but no deal was reached, then they promised to get back to us, only for us to see Gakuya displaying her ticket on our WhatsApp group,” Ouko added.

“She has been given the Azimio ticket yet she cannot even dare sell Baba in her constituency. What is the business then of giving her the ticket if she cannot even mention Baba’s name during her campaigns?”

Mathare North MCA Jared Okode complained that after spending millions campaigning for the Ruaraka parliamentary seat, he was informed at the last minute that there would be no ODM nominations in the constituency.

“I would like to tell my party leader that he is being misled by those surrounding him and he will miss out. I appeal that you call for a meeting to put your house in order,” Okode said.

Maringo Hamza MCA Mark Ndung’u, who is also the Jubilee Party aspirant for Makadara constituency threatened to explore other options if he is not issued his ticket.

Nairobi ODM chairman, George Aladwa who is the current Makadara MP was given a direct ticket to defend the seat in the general elections, locking out all other aspirants.

Another issue raised was failure by Jubilee candidates who were issued with tickets to include the Azimio presidential flag bearer Raila Odinga in their campaign posters.

According to the aspirants, some of the Jubilee candidates who have secured the Azimio ticket have failed to market Raila’s presidency effectively, claiming they would have done a better job.

“Party loyalists have been elbowed out and certain leaders are being listened to. But the few leaders, instead of drumming up support for Baba, are doing their own campaigns and not even mentioning his name or having him on their posters,” said Wangui.

Nairobi aspirants left out in Azimio zoning threaten to walk away if coalition fails to resolve nomination grievances
Image: Courtesy

Last month, the Azimio La Umoja One Kenya Alliance conducted zoning within Nairobi to identify which areas political parties in the coalition will field candidates.

This was said to be a master plan to ensure that they lock out their rivals.

However, the plan ended up rewarding already known Nairobi bigwigs, shutting down other hopefuls who were eager and ready to fly the Azimio ticket, regardless of the party they belonged to.

Orange Democratic Movement (ODM) Party secretary general Edwin Sifuna had earlier on said that the zoning was to enable each outfit in the coalition to ring-fence its strongholds.

In the zoning, Jubilee and ODM got eight constituencies each, while Wiper got one.

However, last week Wiper Party led by Nairobi Chairman Roy Kivusyu issued nomination certificates to its candidates in Nairobi despite Azimio’s move to zone the city.

According to the zoning, Wiper was only left with Embakasi South out of the 17 seats.
News
9 months ago