Some girls use tissue papers, clothes and pieces of mattresses that they pluck from their beddings

•Others go as far as having sex with the older boys in order to get a few coins to buy the pads.

•The gynaecologist said it is not advisable to use clothes as they do not have the ability to absorb the blood. 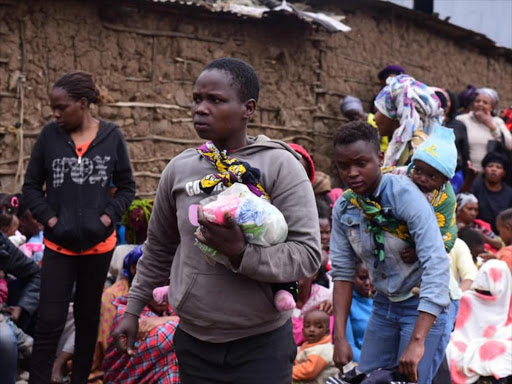 Dirty rags, pieces of mattresses and sometimes transactional sex for pads are some of the ways the young girls in Nairobi streets are forced to cater for their menstrual needs.

While most people give the street kids food, they forget other intense basic needs, one of them being sanitary towels for the girl child.

Some of the street girls are using tissue papers, clothes and pieces of mattresses that they pluck from their beddings because they have no access to the sanitary towels.

Others go as far as having sex with the older boys in order to get a few coins to buy the pads, and it becomes harder when their male counterparts still refuse to give them the much-needed money to buy sanitary pads after accepting their advances.

Sonnie, who resides in Mlango Mkubwa in Nairobi County, was just about her daily business on the streets when she felt something trickling down her thighs and upon checking, it was blood.

"I felt weird because I did not know which step to take next. I just sat down waiting for older girls to come to my rescue," she said.

"I hoped it was not something serious because, at that time, I didn't really understand what it was."

One of the older girls brought her a piece of a mattress and taught her how to use it.

"She told me that they are called mashiro and the bleeding will happen every month," she said.

Carol, also from Mlango Mkubwa, says she already lost hope in life after having completed her secondary education and lacked a person to hold her hand.

"I was orphaned at a tender age. And despite being a bright student, I had no one to turn to after completing my secondary education," she said.

She says she has two children who are under the care of her brother at their rural home. She rarely goes to see them.

Carol feels like she has failed in life and cannot face her two children.

I'm ready to sacrifice my two children just for money because I'm really suffering," she said amid tears.

According to her, severe cramps are her biggest nightmare and every time she feels the pain, she resorts to using hard drugs.

"When you are high, you will not feel as much pain," Carol said.

When Snaida started her menses, she was working as a house help but she says her employer was cruel, making it hard for her to share the news.

She was clueless about the messes and relied on the tissue which soaked within minutes.

"My clothes were stained and my employer chased me away because of lack of proper hygiene. That is how I found my way to the streets," Snaida narrates.

She mostly loiters around Nairobi CBD and says she uses the few coins she gets from passersby to buy sanitary towels or agrees to sexual advances from men in exchange for sanitary pads.

She says her mother lives in Nairobi's Kibera slum but it has been years since they saw each other. She has one kid but does not know who the father is.

One of the girls had contracted an infection that she doesn't know how to handle and it deprives her of the joy of mingling with others.

Wanja, who lives on the outskirts of Nairobi, has an infection that made her withdraw from others because she feels uncomfortable.

She says her skin itches-often worse at night and her skin has blisters.

She hopes it will disappear on its own because she cannot afford to buy the medication.

"I have rashes on the thighs. It is worse when I'm on my menses and I depend on the rags during that time," she said.

We have learnt ways and means to survive with the little we get from the well wishers.

"We would not mind if volunteers decide to educate us on menstrual health and hygiene and provide for us the sanitary pads," she said.

"Society will give us food or it's simple for us to collect from the bins but pads are not something you just collect."

Dr Wasike Wamalwa, a gynaecologist at Coptic Hospital, said girls risk exposing themselves to infections when using the tissue and dirty rags during their periods.

"Using dirty clothes is very risky to their health as well as their future. The dangers of infection might have immediate or long term effects," Wasike said.

Some of the long term dangers include the cervix, pelvic cavity and uterus infections and pelvic inflammatory.

The short term included rashes and itchiness due to friction caused by those clothes.

"There can be cases of blocked tubes as the girls continue to grow up, which might result in them not being able to get pregnant," he added.

In an exclusive interview with the Star, the gynaecologist said it is not advisable to use clothes as they do not have the ability to absorb the blood.

''Even when the cloth is clean, it is still not the best option," he said.

Sanitary pads distribution has been an issue in the country for the longest time and the street girls and the less privileged are still not able to access them.

The State Department for Gender Affairs is charged with procuring and distributing sanitary towels for girls in public primary, special primary and secondary schools, leaving out the minority group.

The Sanitary Towels Programme was launched in 2011 by the Education Ministry, which had been procuring and distributing sanitary towels to girls from disadvantaged backgrounds.

This was after cases of teen pregnancy kept on rising as a result of transactional sex for pads becoming rampant.

It had been reported from various marginalised regions and rural areas in Kenya that schoolgirls had been using unhygienic materials such as torn pieces of cloth, matters sponge, animal skin, old rags, leaves, cow dung.

Some dug a hole on the ground to sit on for the whole period as a means to manage their menstrual flow.

The use of unhygienic materials can lead to; leakage, infections, psychological discomfort which may culminate in poor performance and stigmatisation.

The inaccessibility of menstrual products resulted in embarrassment, anxiety and shame when girls and women stained their clothes.

NGARI AND KAMAU: Why Kenya is yet to eradicate period stigma

Normally, menstruation is a healthy and natural part of the female reproduction cycle
Opinion
5 months ago

Youth on a mission to amass coins for pads

Poverty, unemployment from pandemic have pushed them into the streets.
Counties
4 months ago

Safest facilities, located away from the houses, require residents to pay a fee.
Counties
6 months ago

Odede is one of Africa’s best-known community organizers and social entrepreneurs.
News
6 months ago
WATCH: The latest videos from the Star
by PURITY WANGUI
News
24 March 2022 - 11:07