• He regretted that a lot of projects including those under the big four agendas would have been fulfilled were it not for Raila's intrusion.

• Ruto further accused Raila of playing tribal politics after his entourage was attacked in Kisumu a few weeks ago. 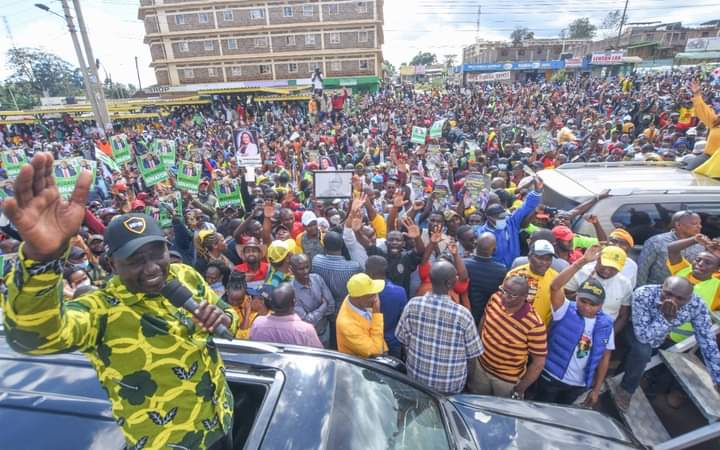 While terming him as bad news to the current administration, Ruto regretted that a lot of projects including those under the big four agendas which would have been fulfilled were it not for Raila's intrusion.

"We were on the right track until his entry into the Jubilee party where he devoured and scattered our agendas. His selfish ambition led him to initiate a process to change the constitution, not for the well being of the citizens but for his own," Ruto said.

The DP said as a result, Jubilee got distracted and lost focus on it's development agendas.

Ruto further accused Raila of playing tribal politics after his entourage was attacked in Kisumu a few weeks ago.

He however assured that all was not lost as he promised to revive the big four agenda once he clinches the presidency.

"We have to change the narrative from next year and that is by activating our bottom-up economic plan that seeks to empower the lowly. For over 50 years ,millions of Kenyans have been subjected to an impoverished lifestyle while a few at the top continue to live lavishly," he said.

Ruto further told off a clique of Mt Kenya leaders for forcing down the throats of the region residents the candidature of Raila to the position of the president.

He said that they had no moral authority to dictate to Kenyans who their leaders should be but instead should allow the people decide.

"We put together the current administration in 2013 and as President Uhuru Kenyatta heads to retirement are there no better options to succeed him apart from Odinga ?" he posed.

The leaders said they shall not be cowed for joining UDA and drumming up support for Ruto.

They praised his agenda to unite and change the country's economy as opposed to his opponents who were banking their victory on boardroom talks and cultural association.

Raila vows to push on with unity call

Says he will keep on driving the handshake agenda, which is to unite the country
News
5 months ago

Eenmity between Ngirici and Waiguru was evident as they didn't greet each other.
News
5 months ago
by WANGECHI WANG'ONDU
News
28 November 2021 - 18:01