Kalonzo led a delegation to her Kagio home with a mission to woo the governor to join OKA.

• Waiguru said she would continue engaging with like-minded parties to make an informed decision.

• She also praised OKA for factoring women in positions of leadership should the alliance form the next government. 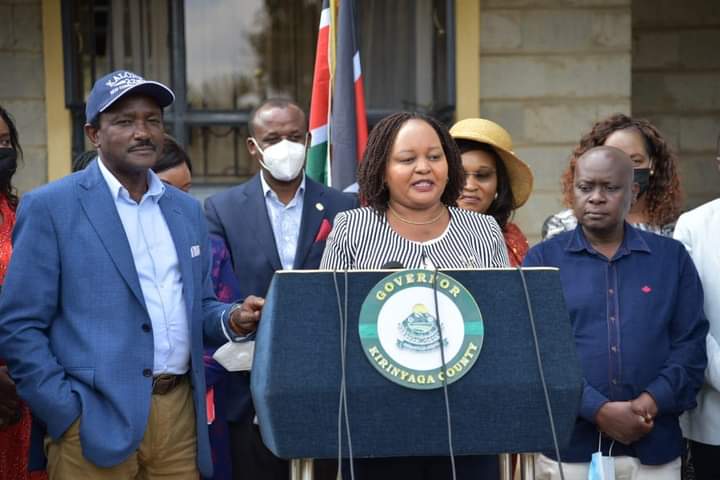 Wiper leader Kalonzo Musyoka, Kirinyaga Governor Anne Waiguru and other Wiper delegates when they called on the governor on Tuesday at her Kagio residence.
Image: WANGECHI WANG'ONDU

Hold your horses. These were the words of Kirinyaga Governor Anne Waiguru after an hours-long meeting on Tuesday with Wiper delegates, led by party leader Kalonzo Musyoka.

Waiguru said she is still in the process of introspecting and consulting widely on the best political camp to join and will announce the direction to take in due course.

Kalonzo led a delegation to her Kagio home with a mission to woo the governor to join the One Kenya Alliance.

The visit, according to Kalonzo, was triggered by a text message sent by the governor to one of the OKA founders whom he did not disclose, challenging the team over gender inequality.

"The message was well received by one of the gentlemen after we had our OKA meeting in one of the local hotels. It read, that it (OKA) was a man's club," he said.

The Wiper party leader said the alliance was open to accommodate the governor as she would competently handle their mission which was to unite and implement development projects in the country.

He also noted that their manifesto would be gender sensitive and would  incorporate both genders to promote unity and national cohesion.

"While I was a presidential candidate in the 2007 elections, I did select Dr Julia Ojiambo to be my running mate. That goes to say that I'm ready to work with the opposite gender in matters of national leadership," Kalonzo said.

He further called on the national government to carry out an aggressive Covid vaccination drive to give way for safe political campaigns and ultimately an election that will not put the health of Kenyans in jeopardy.

Kalonzo hailed Waiguru for her performance in transforming the county through projects.

He said he is ready to woo Mt Kenya residents to support his bid.

"I'm ready to scale up the mountain. But I'm also very cautious not to cause any friction and no wonder I'm paying a courtesy call to the governor and engaging other local leaders."

Waiguru said she would continue engaging with like-minded parties to make an informed decision.

"We will continue participating in the ongoing conversations and political organisations that are being established with an aim of finding ourselves in the government of the day after the 2022 elections."

She also praised OKA for factoring women in positions of leadership should the alliance form the next government.

"As a leader who champions for the rights of women, I'm impressed to learn that their manifesto advocates for equality in Cabinet slots for both men and women," Waiguru said.

Mudavadi said that it is possible for him to choose a running mate from Mt Kenya region.
News
11 months ago
by WANGECHI WANG'ONDU
News
14 September 2021 - 16:48