FALSE: The AU has not suspended Ethiopia’s membership 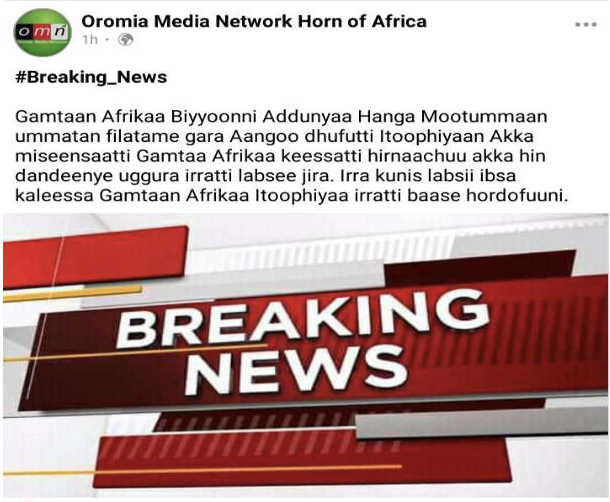 The African Union (AU), a 55-member state organisation, has not suspended Ethiopia from the continental body.

On July 2, 2021, a social media user claimed in a Facebook post that the AU had imposed sanctions on Ethiopia “until the government, which is elected by the will of the people, comes to power”.

The post, in Afaan Oromo language, translates as, “Breaking News: African Union has imposed sanctions on Ethiopia, suspending it from the Union’s membership”.

Ethiopians went to the polls on June 21, 2021, and official results announced that Prime Minister Abiy Ahmed’s Prosperity Party won 410 of the 436 seats in the federal parliament.

PesaCheck looked into the allegation of sanctions, and it turns out there is no statement supporting this claim in the AU press archive.

Similarly, a review of the African Union website shows there are no reports about the claimed ban.

What is on record from the Union’s Commission chairperson, Moussa Mahamat, is a statement dated Monday June 28, 2021, welcoming the declaration of a ceasefire in the Tigray region by the Ethiopian federal government.

In his statement, Mahamat reaffirms the AU’s commitment to supporting Ethiopia’s efforts towards peace. The ceasefire has been lauded as one of the steps aimed at ending the Tigray conflict that started in November 2020 and has left a trail of destruction.

In recent years, only Sudan and Mali — both of which faced military coups — have had their AU membership suspended, in 2019 and 2021 respectively. In both instances, the AU required a civilian-led transitional government as conditions for restoration to membership status. This is Mali’s second suspension.

PesaCheck has looked into a Facebook post claiming African Union has banned Ethiopia from its membership and finds it to be FALSE.

Why Tigray is unlikely to secede from Ethiopia

The war in Tigray has further created divisions in Ethiopia.
News
3 months ago

The election had been delayed due to the Covid-19 pandemic.
News
3 months ago

Egypt said last month it had received official notice from Ethiopia that it had begun filling the reservoir.
News
3 months ago
by PesaCheck
News
25 July 2021 - 00:00