• South Africa is the continent's worst-affected nation in terms of coronavirus cases and deaths. 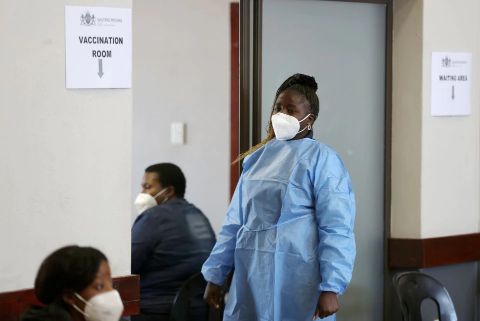 A health worker looks on as she waits to give a dose of a coronavirus disease (COVID-19) vaccine during a vaccine rollout for teachers in Meyerton, south of Johannesburg, South Africa June 23, 2021. REUTERS/Siphiwe Sibeko/File Photo

New coronavirus infections in South Africa appear to be dominated by the Delta variant that was first identified in India, scientists said on Saturday as a third wave sweeps the hard-hit African country.

South Africa is the continent's worst-affected nation in terms of coronavirus cases and deaths, accounting for roughly a third of confirmed infections and more than 40% of the deaths recorded across Africa.

"A new variant seems to be not only arising, but it seems to start dominating the infections in South Africa," Professor Tulio de Oliveira at the University of KwaZulu-Natal, told a news conference.

"It completely took over," he said, adding that the Delta variant was more transmissible even than the Beta variant.

De Oliveira said there appeared to be community transmission of the Delta variant in KwaZulu-Natal province and that scientists were analysing the data for Gauteng, the province where the biggest city Johannesburg is located.

South Africa recorded another 18,000 infections on Friday, with 215 deaths.

Acting Health Minister Mmamoloko Kubayi-Ngubane told the news conference it was now likely that the peak of the third wave would surpass that of the second wave in January, when more than 21,000 new daily cases were recorded.