• Kagwe is accompanied by a team from the office of the First Lady to learn about Cuba's elimination of mother-to-child transmission of HIV and congenital syphilis. 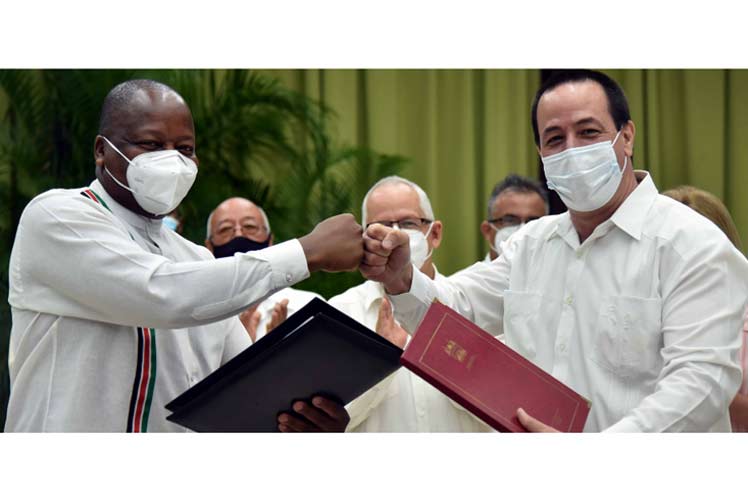 Kenya has extended the contracts of Cuban doctors in the country for another three years.

The two countries also agreed Kenyan doctors should continue training in Cuba for another three years.

The first batch of 90 Kenyan trainees who went to Cuba in 2018 returned in April this year. They were immediately deployed to county hospitals.

The new agreement was signed on Monday by Cuban Minister for Public Health Dr Jose Angel Portal Miranda and Health CS Mutahi Kagwe, who is visiting the Caribbean country for three weeks.

Kagwe was accompanied by Rose Mudibo, director of liaison and administration in Health ministry and Peter Sang, a deputy director in the Ministry of Foreign Affairs, among others.

There is also a team from the office of the First Lady, who are learning about Cuba's elimination of mother-to-child transmission of HIV and congenital syphilis.

“There are many opportunities in Cuba that remain untapped, especially in the area of pharmaceutical, biotechnology and vaccines. We look forward to a more robust collaboration,” Kagwe said, according to a statement from the ministry.

The move was immediately opposed by Kenya Medical Association president Dr Were Onyino, saying it is not judicious use of taxpayers' money.

"We have about 2,000 unemployed Kenyan medical officers and 30 specialists who are looking for jobs. Why not hire them first? The cost of maintaining one Cuban doctor is enough to hire four Kenyans," he told the Star.

Onyino also demanded that the ministry release the performance audit report of the current Cuban cohort. "Many of them could not perform. They did not measure up to what was expected," he said.

"It's the most irresponsible thing one could do when we have a huge chunk of Kenyan specialists who are not employed," he said.

He opposed the scholarships offered to Kenyans in Cuba, saying the same courses are available in Kenyan universities.

"You saw the difficulties the last cohort went through, yet the government has made it almost impossible for doctors in Kenya to go for post-graduate training locally," Atellah said.

Kagwe said that the contribution of Cuban doctors in Kenya has been evident during the current Covid-19 pandemic. They remained working while Kenyan doctors went on strike demanding more money.

He said President Uhuru Kenyatta remains committed to the safe return of doctors Assel Herrera and Landy Rodriguez who were abducted by al Shabaab militants in Mandera on April 12, 2019.

The collaboration in health between the two countries began in June 2018, when 101 specialists travelled to Kenya. Kenya sent medical doctors for training in Cuba in August that year.

The Kenyan medics were all students of Cuba's Latin American School of Medicine for two and a half years. They spent more than Sh220 million paid by taxpayers.

Supplement III of the agreement signed on Monday shows a new cohort of Kenyan medics will now train in Comprehensive General Medicine for three years.