NO ONE IS ABOVE THE LAW

Charge Uhuru and Raila for flouting Covid-19 rules in Kisumu

• Kenyans have seen how leaders, including presidents, have been made to pay for flouting Covid-19 regulations in Kenya and other parts of the world.

• President Kenyatta and Raila are not above the law and they should equally be held accountable for disregarding Covid-19 protocols in the Nyanza tour. 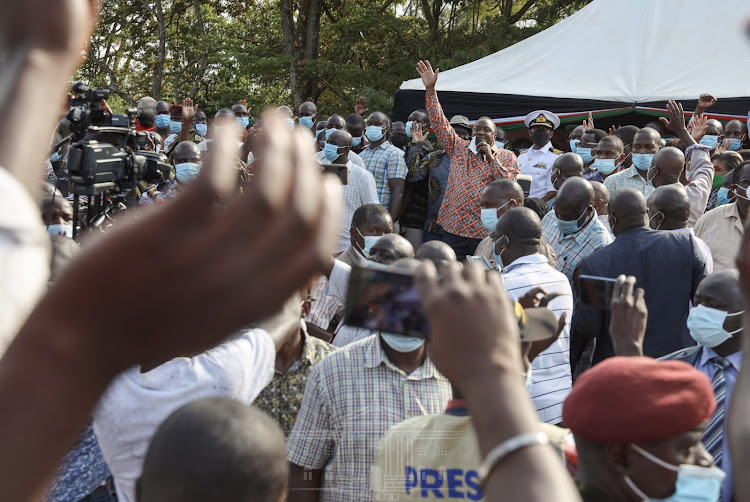 President Uhuru Kenyatta accompanied by former Prime Minister Raila Odinga and Nyanza leaders adresses residents at Wundayi market. He urged them to back BBI, saying the reform process is aimed at uniting and accelerating the country's progress
Image: PSCU

This week, Kisumu county was a beehive of activities following President Uhuru Kenyatta’s visit to the region. His host was his handshake and BBI partner former Prime Minister Raila Odinga.

From billboards in the streets to the washing of streets by the fire department, nothing was left undone.

Projects were unveiled to showcase the work of government and the fruits of the handshake.

The culmination was the marking of Madaraka Day celebrations at the Jomo Kenyatta International Stadium, Kisumu, which was attended by among others, Burundi’s President Evariste Ndayishimiye.

To sum it up in one word, Kisumu was a spectacle.

So hyped was the President’s tour that even the topmost journalists in the country were caught on different occasions making obvious and open blunders while covering its build-up.

From giving dates that don’t exist such as May 35 to referring to Raila as the Deputy President, Kenyans heard it all. Social media was also full of memes and posters of the event, with locals in Kisumu openly showing their excitement.

One would expect that with such a huge public interest in the event, the leaders would use it to send a strong message on an issue that is affecting the country the most – the Covid – 19 pandemic.

As responsible leaders who care about Kenyans, the President and the former Prime Minister should have made it clear that Kenya cannot afford to loosen the Covid-19 regulations.

Especially with the India strain now confirmed in the country, the leaders should have ensured utmost caution.

Kisumu and neighbouring counties are presently the most affected in Kenya with high numbers of infections reported daily.

To the disappointment of many across the country, Covid-19 protocols were completely disregarded as hundreds mingled freely thus spreading further the disease.

The “meet the people” meetings were reported, with the President and former Prime Minister addressing the masses completely devoid of health regulations.

During the event itself — which was screened live on most media houses — those in the stadium did not observe social distancing and those outside were allowed to jostle in a show of support to the leaders. Even the entertainers and security officers in the stadium did not wear masks, as was the case in past events.

The Kisumu tour came just a few days after Interior CS Fred Matiang’i extended the curfew and accompanying Covid-19 restrictions such as the ban on political gatherings in the country and closure of businesses at certain times to contain the spread.

That soon after the extension, the President and former Prime Minister deliberately ignored the regulations and flouted the rules by holding political meetings is a show of impunity and disdain for rule of law.

The minimum action to be taken against the two is arrest and the security authorities must do so swiftly without further delay.

Kenyans have seen how leaders, including presidents, have been made to pay for flouting Covid-19 regulations in Kenya and other parts of the world.

Nairobi Senator Johnson Sakaja is one such leader who was charged with flouting the rules. He apologised and resigned from the Parliamentary Committee on Covid-19.

From social media, it is reported that Norway Prime Minister was found guilty of flouting the rules and fined.

President Kenyatta and Raila are not above the law and they should equally be held accountable for disregarding Covid-19 protocols in the Nyanza tour.

Kenya is a country with a strong Constitution and the recent BBI ruling confirmed that no one, not even the President, is allowed to violate the law.

In the case of Kisumu, it is obvious for all to see how the rules on Covid-19 were violated.

With such evidence, the police must move swiftly to arrest at present in court the super-spreaders, President and former Prime Minister, just as they do when other Kenyans break the rules.

The law must be applied equally across the board irrespective of who is on the other side of it. In the meantime, the two should be held personally responsible for any surge in infections in Kisumu.