Says Judiciary should compose songs so that Kenyans can listen.

• Kenya Rugby Union had written a complaint that Wekesa never gave them a chance to be heard in the anti-doping task force.

• "I don't give bribes. I have been arrested so many times on the road by traffic police and I don't bribe," he said. 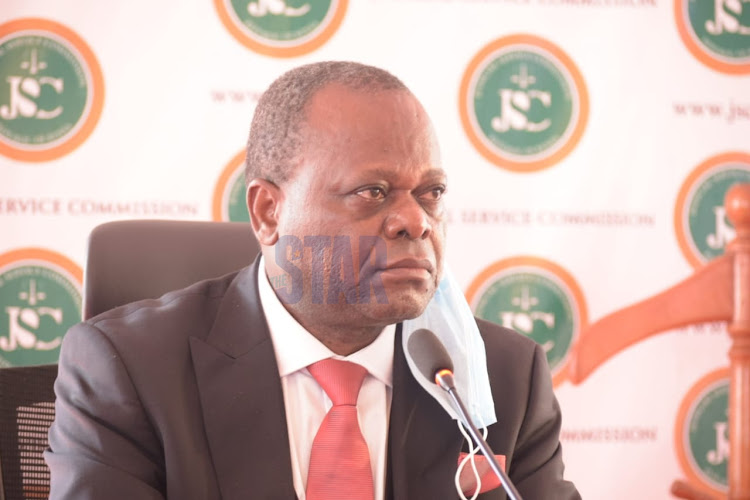 Professor Wekesa Moni during his interview for position of Chief Justice before the Judicial Service Commission panel on April 22, 2021.
Image: CHARLENE MALWA

Dr Moni Wekesa was Wednesday put on the spot by the Judicial Service Commission over a report he did when he was at the Anti-doping taskforce.

Kenya Rugby Union had written a complaint that Wekesa never gave them a chance to be heard in the anti-doping task force.

Commissioner Macharia Njeru wanted to know why they didn't give them a fair hearing but still went ahead to condemn them.

Wekesa said when he was appointed, a total of 34 athletes had tested positive for banned substances and they needed to come up with a solution.

He said 236 were rugby players were interviewed and 78 of them said they know someone who used steroids.

"We wrote to the chairman of KRU chairman to appear to us to explain the issues," he said

They decided to write in the report and recommend that the coaches undergo the disciplinary process for being involved in doping.

His defense was they solely relied on research.

I'll transform Judiciary by taking it to the public - Dr Wekesa

On corruption, Dr Wekesa said he has never given a bribe.

"I don't give bribes. I have been arrested so many times on the road by traffic police and I don't bribe," he said.

Dr Wekesa also says one way to publicise Judiciary is through songs.

He says the Judiciary should compose songs that talk about the institution so that Kenyans can listen.

Dr Wekesa also defended the decision by Daystar University to hold prayers every morning before they begin classes.

Justice David Majanja wanted to know if that would not be seen as discriminatory to the other students who are not Christians.

He said it's true that they hold prayers but to him, it would be a problem only if the school makes it compulsory.

Wekesa also told the commission that the prayers have never been an issue considering they had a number of Muslim students.

Dr Wekesa said he has also worked at Catholic University with was also a Christian based institution that had students from all backgrounds.

At the beginning of the Chief Justice interview, he told the commission that he was the one who founded the School of Law Mount Kenya University.

He said he was the one who introduced the culture of all students wearing suits twice a week so that they feel and emulate practising lawyers.

Dr Wekesa said he consulted with the students themselves who had raised that concern and they agreed on two days a week, unlike Daystar University where it's mandatory to be in a suit five days a week.