The leaders say the IEBC can deliver a plebiscite Sh12 billion less than its projections. 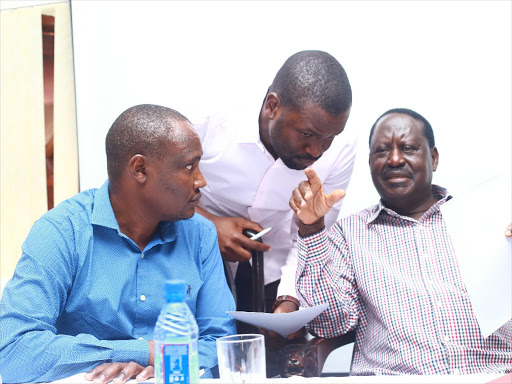 The Orange party has defended its leader Raila Odinga for saying the IEBC can conduct a Sh2 billion referendum.

Party leaders on Friday maintained that this is possible if the electoral agency reduces wastage during elections.

The Independent Electoral and Boundaries Commission (IEBC) had projected that it would require Sh14 billion to conduct the Building Bridges Initiative (BBI) referendum.

But ODM secretary general Edwin Sifuna said, “If there was ever a time to call out, isolate and throw out the rogue gangsters occupying IEBC, it is now. They seek not to serve but to rob the public, televise their incompetence and impose themselves on a public that couldn’t be more nauseated,” Sifuna said.

“Chebukati and his gang of ne'er-do-wells should by now be aware that the Rt Hon Odinga is not prone to making unverified statements, and his figures are backed by science and global case studies.

"The commission, as we have illustrated, has been caught with its hand in the cookie jar, yet it tries to convince us the hand was trying to clean the inside of the jar!”

Sifuna was accompanied by ODM MPs Opiyo Wandayi of Ugunja and Samuel Atandi of Alego Usonga during the press briefing at Chungwa House.

Sifuna said the commission’s account balances reflected in the financial statements for the year ended June 30, 2017, differed from the ledger balances.

"Variances totalling Sh631,972,981 were noted on various heads with Chebukati and Co., offering no explanation for this material anomaly,” he said.

Sifuna said in all conversations around electoral justice in this country, the IEBC as currently constituted remains the elephant in the room; the black sheep of the family that everyone knows is the problem, but rarely talks about.

"It is therefore shocking that it can abrogate itself the responsibility of explaining problems that are its own creation."

Wandayi, who is also the party’s secretary for political affairs said they will not allow Chebukati and team to continue wasting taxpayers’ money in inflated budgets.

"By the mere fact you wasted taxpayers money in the past does not give you leeway to waste more resources now," the Ugunja MP said.

The leaders also faulted Chebukati for linking Raila to the cost of the 2010 referendum.

“Only a really dumb thief says but I stole this same way last time and it was ok, when caught in the act! The budget was overshot in 2010 and in all elections the electoral body has conducted since. It is at this time of reforms that we shall make it all right, regardless of how easy they walked away with the loot another time,” Sifuna said.

On Thursday, Chebukati issued a statement dismissing Raila’s figures. He said Raila was the Prime Minister when the country splashed Sh10 billion to conduct a referendum involving 12 million voters.

Kenya had 19.6 million voters during the 2017 elections, a number IEBC estimates to have increased due to the ongoing continuous voter registration.