At the time of the husband's death, she was the family’s bread winner

• Emma was fearless in her approach to life.  Courage, integrity, determination, curiosity, and compassion were the touchstones of her life.

• Due to Covid-19, the family said there won't be a funeral gathering. Emma had wished to be cremated. 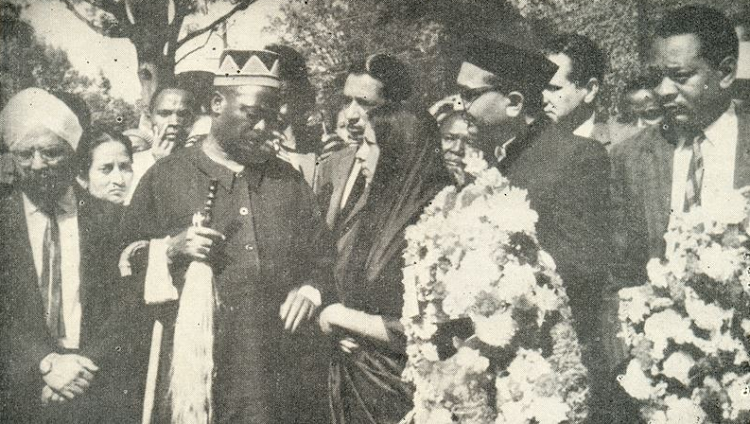 Emma Pinto is dead. The widow of Pio Gama Pinto, the first Kenyan politician to be assassinated after Independence, died in Ottawa, Canada, on Wednesday aged 92.

One of her daughters was by her side in the hospital where she had been admitted to after a heart attack on October 20, the day Kenya celebrated Mashujaa Day.

Pinto was 38 when he was shot dead on February 24, 1965, outside his Lower Kabete house, leaving behind his wife of 11 years and three daughters - Linda, Malusha and Tereshka.

Two years after the assassination, Emma and her children migrated to Canada.

By the time of his assassination, Pinto was a Nairobi MP.

Emma worked for Cabinet Minister Achieng’ Oneko as a secretary at Jogoo House.

Pinto had dropped her at her place of work and returned home to collect his parliamentary papers. Two assassins were waiting nearby and gunned him down in cold blood.

Emma had wished to be cremated. However, the family said there won't be a funeral gathering due to Covid-19.

The Pinto widow is survived by three daughters and five grandchildren.

Emma recalled the February 24 assassination to Awaaz magazine in 2015. Soon after she received the call about her husband’s death, Vice-President Jaramogi Oginga Odinga offered his car to rush her home.

At her gate, she found Pinto’s body in his car with blood oozing from a hole near the ribs.

Pinto was a committed socialist who shared out all he had. Their house was a donation from one of his admirers.

She told the magazine that at the time of his death, he had no money in his bank account. She was the family’s breadwinner.

She was so devastated by the death of her husband that Cabinet Minister Joe Murumbi took her to his house for two days as she came to terms with the loss.

"My mother stayed with the girls at our house. Our friend, Dr Eraj, gave me a sedative because I was in severe shock," she told the magazine.

Pinto's radical socialism scared right-wing politicians. He strongly condemned capitalism and was opposed to land grabbing and the buying spree of undervalued properties by those in the inner sanctum of Jomo Kenyatta's government.

In Canada, Emma worked as a secretary in several organisations in Toronto, the last being the Scarborough Board of Education from where she retired in 1983.

In 1997, she moved to Ottawa and lived on the same street as her daughter Linda. She was involved in the neighbourhood community association as an activist. This earned her an award in 2002.

"Emma was fearless in her approach to life. Courage, integrity, determination, curiosity, and compassion for others were the touchstones of her life," her daughters said in their tribute.

In the sunset days, Emma stayed in an assisted living home for the elderly in Ottawa.