Kitui has been without a substantive health chief for two years

• A report before the assembly says that healthcare in Kitui and the universal health care programme are on the verge of collapse.

• It recommends all Kitui County Health Insurance Cover financial reports be made available to the assembly  within 30 days. 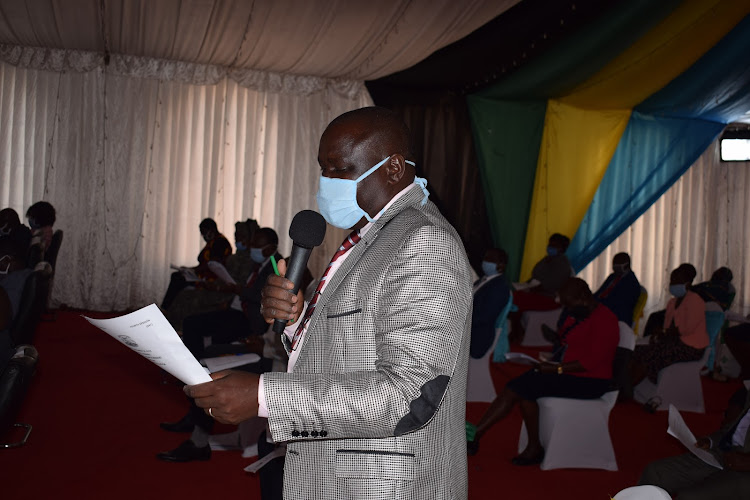 DAMNING REPORT Chairman of the Kitui County Assembly health and sanitation committee Philip Nguli making a presentation in the assembly in May 2020.
Image: Musembi Nzengu

The ward reps overwhelmingly recommended the immediate recruitment of the   CECM after adopting a report that painted a gloomy picture of the county's health and sanitation situation.

“The governor should recruit a substantive CECM for Health and Sanitation without further delay in a period of 60 days,” said the approved recommendations of the assembly health committee.

It indicated no sanctions if the governor failed to appoint the CECM.

Kitui has been without a substantive health CECM since 2018 when Rosaita Ngina quit over differences with the governor.

Dr Richard Muthoka, the health and sanitation chief officer, has been acting as the CECM.

The report tabled before the assembly on Wednesday by Health committee chairman Philip Nguli said that healthcare in Kitui and the universal healthcare programme were on the verge of collapse.

“The Kitui County Health Insurance Cover was a noble idea from inception. However, due to current weak management, it is on the verge of collapse,” Nguli said as he presented the report, adding that relevant laws had been flouted in running KCHIC.

The adopted report invited EACC sleuths to investigate why Muthoka  "intentionally flouted" the assembly-approved regulations for KCHIC  management, a decision said to have plunged the scheme into a crisis.

Further, the report recommended a forensic audit of all funds raised through KCHIC since inception and anybody found to have embezzled the monies be brought to book.

It also recommends all KCHIC financial reports be made available to the assembly  within 30 days.