You are pushing me to the edge, Lusaka warns Murkomen

Lusaka said it was unfair for him to keep on rising on point of orders during presentation.

• Kakamega Senator Cleophas Malala, who chaired the committee that was investigating the impeachment allegations against the governor, was on the floor of the house presenting the report. 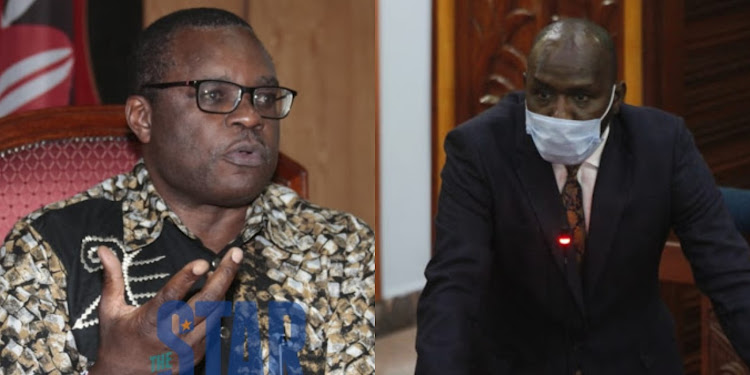 Lusaka said it was unfair for Murkomen to keep on rising on point of orders while interrupting presentation of a report on the impeachment of Kirinyaga Governor Anne Waiguru.

Kakamega Senator Cleophas Maalala, who chaired the committee that was investigating the impeachment  allegations against the governor, was on the floor of the House presenting the report.

Murkomen stood three times on point if orders demanding that Malala  substantiates claims that the senate had adopted recommendations of a previous committee on the threshold to be adopted with regards to an impeachment of a governor.

“Mr Speaker I do not mean to interrupt but he is insinuating that this house adopted that report. He should rather say they used a criteria used by a committee and not the Senate because that report was not adopted by the house,” he said.

But Majority Leader Samuel Poghisho on a point of order rose and demanded that Murkomen be barred from debating the matter before it is tabled.

“Mr Speaker, we have a threshold on what point of order is, we cannot keep arguing on a matter that is being tabled,” he said.

His Makueni counterpart Mutula Kilonzo Junior hit out at Murkomen saying he was rising with strange argument to interrupt the house.

“Mr. Speaker I am surprised by the strange argument coming from a lawyer, former majority leader who brags of drafting of the county governments Act,” he said.

Kilonzo asked the Speaker to ensure that there was order in the house.

He said the law stipulates that an orderly conduct of the Senate and its committees is the conduct of parliament.

“We cannot allow a member elected since 2013 to purport that the conduct of the committee is questionable, you must restrain him, he cannot continue to interrupt us and the Senator must be reminded that we are not bystanders in this house because some of us got more votes than him if it is a matter of bragging Mr. speaker, he must listen because the constitution is very clear on matters of committees. Why is the Senator behaving like a stranger in Jerusalem,” he said.

Minority leader James Orengo asked the Speaker to ensure that there was some form of debate in the house.

“Interruptions in the middle of presentations Mr. Speaker we can never debate. You have given us the opportunity to comment on the matter and Murkomen will have his time,” Orengo said.

Orengo while hitting at Murkomen said he was the vice chairperson to the first impeachment motion tabled in the house.

“This matter went through the court and the thresholds were a direction by the Supreme Court. The thresholds are not of Malala but the committee adopted it on the basis of judicial decision which is binding on the house,” he said.

“If we interfere with him, he will not be able to table the report. If Murkomen will be interrupted during his time will he be able to debate?,” he posed.

After the Speaker asked Malala to proceed, Murkomen did not take it lightly and he demanded to rise again on a point of order.

It is from here that the agitated Speaker scolded him saying, “Murkomen please, you are pushing me to the edge, you are not going to tell me what to do…. Murkomen please”.

The governor survived the impeachment motion against after the Senate dismissed the motion seeking to remove her from office on grounds of abuse of office and gross misconduct.

The committee cleared her of all the charges stating in their report that they were not substantiated.

Special Committee cleared her of all the charges, say they were not substantiated.
News
1 year ago

Why Governor Waiguru was acquitted by the Senate

Committee blames impeachment on acrimonious relationship between her and MCAs.
News
1 year ago
by PATRICK VIDIJA Investigative Journalist
News
26 June 2020 - 17:17