Your medical insurance does not cover coronavirus but insurers have compromised

•The first case of local transmission was reported in South Africa as all others have been persons who had travelled abroad.

•President Kenyatta directs review and adjustment of budgets towards prevention and management of emergency response. 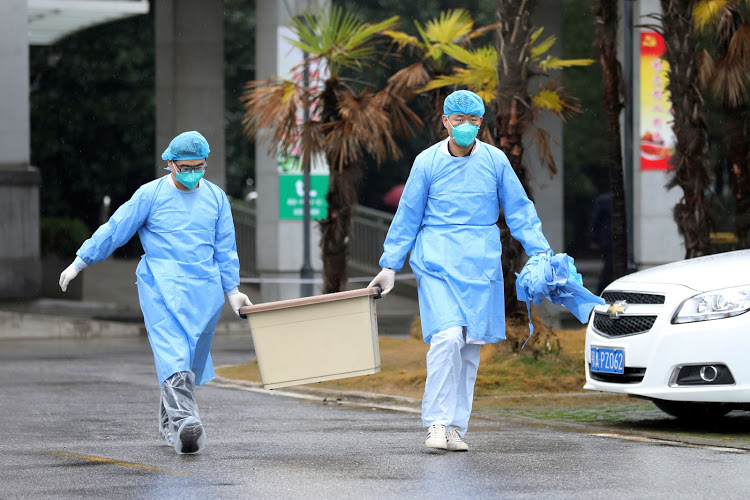 OUTBREAK: Medical staff carry a box at Jinyintan hospital, where the patients with pneumonia caused by the new strain of coronavirus are being treated, in Wuhan, Hubei province, China Image: /REUTERS

With the World Health Organization declaring coronavirus a global pandemic, infected persons will not get treatment under their medical cover.

However, Kenyan insurers have agreed to continue covering the disease after consultations.

"Following engagement with the insurance companies, Commissioner of Insurance Godfrey Kiptum would like to assure the public that the insurers will continue to provide their services to policyholders affected or infected with the virus," Insurance Regulatory Authority posted on Twitter.

Prior to the WHO’s declaration, an infected person could use their medical cover but this is now not an option.

“The insurers will not be able to offer medical insurance cover for the condition at this moment. The insurers have this category of exclusion properly indicated in the policy documents,” Insurance Regulatory Authority chief executive Godfrey Kiptum told the Star.

AAR Insurance chief executive Nixon Shigoli said once a disease is declared a pandemic, the burden of medical care provision shifts from insurers to the government.

“Insurers now have to think very quickly but I haven’t heard of anyone in the industry who has included coronavirus in their medical offerings,” he said.

He said if underwriters were to decide to introduce such a product it would likely be costly, meaning it wouldn’t meet its intended goal.

“The truth is, we might introduce a product that caters to coronavirus but the uptake may not be as promising. Very few Kenyans are conscious enough to buy such a cover,” Shigoli said.

Kiptum said the regulator and industry players were looking into ways to incorporate unexpected health expenses for coverage.

“We are looking at policies that surround exclusion of patients with chronic illnesses, pre-existing conditions and in the event of epidemics,” he said.

As at Wednesday, if a coronavirus case was declared locally it would have been taken care of by an underwriter under the infected person’s medical policy.

“Epidemics and pandemics are not covered globally because they can be catastrophic,” Jubilee Insurance chief executive Patrick Gitonga said.

“Even for travel insurance, those who decide to travel will have to pay from their own pockets to cater for any corona-related treatments,” he said.

The coronavirus outbreak continues to send jitters across the globe with more and more cases being reported on the African continent.

On Thursday, South Africa’s Health Minister Zweli Mkhizeon reported the first case of local transmission of the coronavirus, saying a 32-year-old man had contracted it after coming into contact with a Chinese businessman.

This is the first case of local transmission reported in Africa as all others have been by patients who had travelled abroad. Africa has now reported 130 cases.

Over 4,638 deaths and 126,620 infections had been reported across the world as of March 11. Of these, over 68,000 had recovered, according to Johns Hopkins University, which is tracking the virus.

While receiving the initial report of the National Emergency Response Committee on Coronavirus, President Uhuru Kenyatta directed review and adjustment of budgets towards prevention and management response actions.

This is aimed at cushioning the economy against negative effects of the pandemic, he said.

The Tourism Ministry already announced it had set aside Sh500 million to cushion the industry from effects of the disease.

“Part of this money will be used to restore destination confidence to ensure that Kenya remains a preferred travel destination globally, while the rest will be used for the post-coronavirus recovery strategy in all our key source market,”  Balala said.

He added that the government was prepared and committed to ensuring that COVID-19 did not get into the country, the reason President Kenyatta formed a task force to coordinate national preparedness for the disease.

The survey revealed manufacturing, tourism, services sector, agriculture, construction and the retail sectors were the most affected.

Kenya imports intermediate and capital goods from China and outbreak of the virus in China hurt manufacturing in Kenya.

Bilateral trade between the two countries, valued at approximately Sh382 billion in 2018, has also been hit hard.

“On average 61 per cent of the businesses reported negative business effects due to the COVID-19 outbreak,” Kepsa said in its survey released on Thursday.

China, Italy and Iran have been the hardest hit nations, with the highest number of deaths globally.

The outbreak has forced Iran to request the International Monetary Fund for emergency funding to deal with the crisis. Foreign Minister Mohammed Javad Zarif said funding was needed to curb the outbreak.

Iran is the worst-affected country in the Middle East, where the disease has killed 429 people and infected 10,075.

Italy further tightened the nationwide quarantine it imposed earlier this week, with all but essential services and shops to close for two weeks.

The decision came after leaders from the European Union promised to do "whatever it takes" to tackle the coronavirus.

US President Donald Trump has banned flights from Europe

“We have also activated our crisis management protocal to proactively address situations as they arise and implement appropriate actions,” KQ said in a statement.

More than 80,900 people in China have been infected with coronavirus since its emergence in the city of Wuhan, with more than 12,400 deaths reported.